A Presto card is shown in Dundas Station.

As the TTC transitions to using Presto for all fare payments, some Ryerson students say the shift from turnstiles to Presto fare gates has made entering stations like Dundas harder for Metropass users.

“They only leave like one or two lanes for people with Metropasses to kind of sneak through,” said Shannon Soutar, a first-year sports media student.

While TTC adult and senior Metropasses are available on Presto, post-secondary ones are not. So for frequent student commuters, the Metropass is the best way to save money. But as the TTC works to phase the passes out, some students say it’s become harder to use them.

Paolo Hermogenes, a second-year business management student who uses a Metropass, said it’s been harder to enter TTC stations because of the limited number of turnstiles that accept Metropasses.

TTC spokesperson Hayley Waldman said at least two fare gates at all main entrances at TTC stations will have magnetic stripe readers until the end of the year, so Metropass users can enter through them.

Until then, Metropass users can also enter stations through collector booth aisles, a crash gate collector or a fare gate, Waldman said.

Soutar said going through the collector booth aisle is not a good alternative the best choice because people who buy tokens or talk to the collector hold up the line. 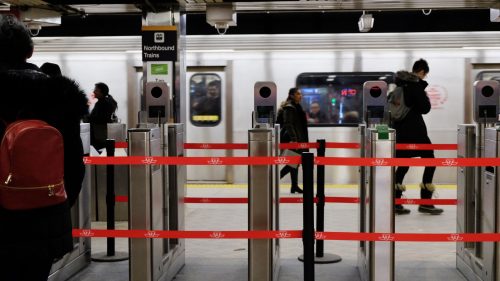 Presto fare gates under construction on one side of Dundas station. (Photo: Samantha Moya)

“More often than not, I would prefer to use College (station) than Dundas because of the crowd,” he said.

Non-Presto users can use tokens, tickets and Metropasses until the end of the year while the TTC transitions to using Presto exclusively.

The TTC is still finalizing details on post-secondary student passes on Presto. No information has been made available on the purchase process yet.