In 2001, a group of Ryerson University students decided to take a chance and find a sponsor for their intramural hockey team. But this wasn’t just any sponsor.

Rather than looking at a local pizza place, a clothing store, or a diner, the students turned to a slightly more out-of-the-box option: Filmores Gentlemen’s Club, now known as Filmores Hotel.

From what Andrew Abercrombie, one of the team’s players, remembers, the idea of using Filmores—a hotel and strip club on Dundas Street East—stemmed from the fact that the players lived in Ryerson’s Pitman Hall residence.

“Obviously, being university-aged males, we had an interest in that establishment,” Abercrombie says over the phone.

Little did they know that the establishment had a mutual interest in terms of sponsorship. According to an Eyeopener article from November 2001, the hotel’s manager, Howard Adams, agreed to assist the team by buying their jerseys and socks on two conditions: That they paid $10 (Adams paid for the rest), and that they’d stop by the bar for drinks after league games.

“I mean, we also weren’t rolling in money ‘cause we’re university students,” says Abercrombie while reminiscing 17 years later. “So to have a business that would be willing to buy us jerseys and socks and all we have to do is stop in a few times … that’s a hell of a deal for us.”

The jerseys featured a woman stripping, as one might expect. At the time, it was the hotel’s logo.

The team, dubbed “Filmores,” wouldn’t even get to play their first game before then-sports and recreation director David Dubois called them in for a talk.

“Obviously being university-aged males, we had an interest in that establishment”

Dubois had been tipped off about the controversial team name when a first-year journalism student did a broadcast story about it. And like any good journalist, he reached out to athletics officials for comment.

Dubois wasn’t impressed with the team being sponsored by a gentleman’s club. That didn’t sit well with Abercrombie and the rest of the team.

“I mean, it was a strip club,” said Dubois of the situation that occurred 17 years ago. “And so it objectifies women and that’s something that we didn’t want represented at Ryerson,” he told the Eye.

Abercrombie said that even though he could see Dubois’ point, he asked the lone woman in the league if she was okay with the logo and she “didn’t have a problem” with it. 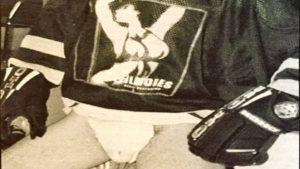 The jerseys featured a woman stripping.

“When I found out that the athletics department had an issue with it, I volunteered to meet with the director and the other guys, because I obviously didn’t think it was right,” Abercrombie recalls. “There was no rule in place, and you can’t make up a rule after we already got jerseys and socks and tell us we can’t be sponsored by it.”

The next season, the athletics department began to review all intramural team sponsorships.

After the meeting, Dubois and the team would come up with a compromise: the team had to wear their jerseys backwards if they wanted to wear them at all.

Dubois also pledged to have the school pay for the logo to be blacked out so as to not incur more costs on the players. “We told them we didn’t want them to be affiliated with Filmores but we appreciate that they don’t want to pay for more jerseys,” Dubois told The Eye in 2001.

“There was no rule in place, and you can’t make up a rule after we already got jerseys and socks and tell us we can’t be sponsored by it”

However, much to Dubois’ chagrin, the truce wouldn’t last very long, as the Filmores played all but one game that year with their uniforms in their regular, forward-facing manner.

Even though they’d get away with wearing the jerseys, the team would still find some difficulty in terms of having their own space.

During the annual athletics banquet at the end of the season, the pictures that were taken of the players mysteriously didn’t turn out.

“[Athletics department photographers] took pictures, but somehow the pictures didn’t turn out … which was what we were told,” Abercrombie said. “We thought it was interesting.”

At the end of it all, the players would ultimately have the last laugh.

If you don’t understand what that means, consider yourself lucky.