The Rams' men's and women's curling team are looking to reach varsity status.

Just over a month ago, the Ryerson Rams added another OUA silver medal to their collection. No, the medal wasn’t won on the hardwood, but on a sheet of ice, and it wasn’t a hockey team that took home silver either: it was the Rams men’s curling team.

The victory was an emotional one for skip Alex Champ, who in 2015, along with his roommate Stuart Leslie, approached Ryerson Athletics to bring a curling team to the university. After many discussions with Athletics personnel, and bringing Perry Marshall—a respected coach on the Ontario curling scene—into the fold, the team was finally approved and made their debut in the 2015-2016 season.

“Our first OUA championship representing Ryerson was almost surreal,” said Champ via email. ”We had accomplished something that we had only dreamed of.” 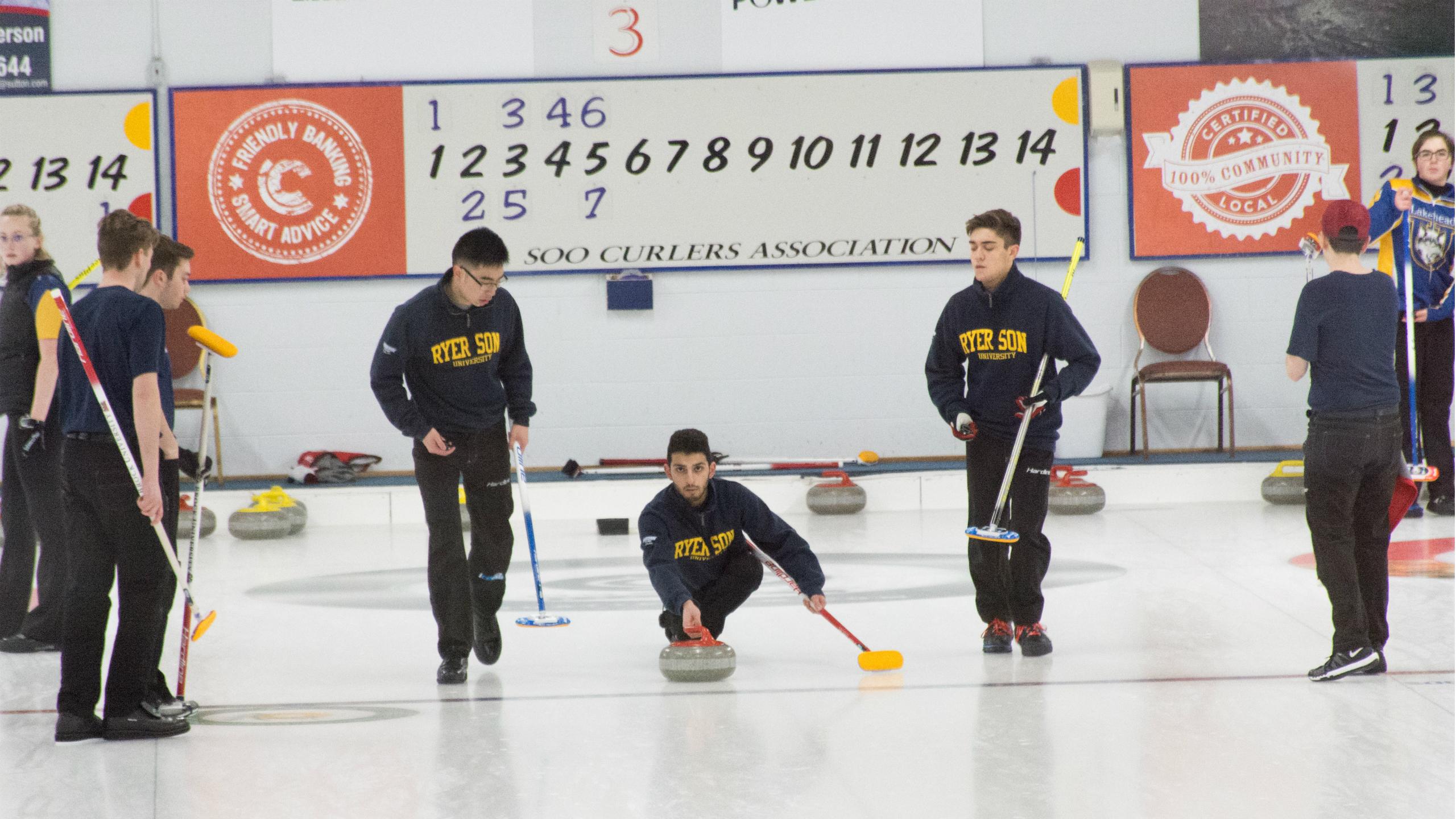 Ryan Fayaz, vice on the men’s curling team, throws a stone in the last end of the OUA gold medal game against Brock in Sault St. Marie on Feb. 19. (Photo: Jacob Thielen)

Since the team first began competing three years ago, both the men’s and women’s teams have been on a steady climb. Last year, the women’s club captured Ryerson’s first curling medal, an OUA silver, en route to the U Sports National Championships.

Now, with the men winning the silver, Champ’s rink is off to the national championships this time around.

Since the inaugural season, a lot has changed, but some aspects have remained the same. Although the curling clubs have made rapid progress, they are still not recognized as a varsity sport, according to Nick Asquini, Ryerson’s varsity operations coordinator.

“I knew that we had the potential to be this successful, but was not sure how soon that success would come,” Champ said. “Knowing that all of the hard work we put into the program was paying off was extremely satisfying.”

Although Ryerson’s curling club has made progress over the last three seasons, they are not any closer to becoming a recognized varsity sport, according to Asquini.

Not being a recognized varsity sport has many implications for Ryerson Curling and other club teams alike, as they do not receive any financial support from the university.

Ultimately, this means that club teams are forced to cover their operating costs by acquiring funds through sponsors, fundraisers, club fees and various opportunities on campus.

“We did have an Adopt-A-Ram program that the Ryerson Athletic department teams use, so a lot of the money we did have came from outside sponsors and from parents and from friends of members of the team,” said sophomore Teagan Walton, when asked about how the curling team covered their costs last season.

Despite having some of these resources, the team members are still forced to go out of their way and provide for themselves. Even though they know this, Asquini says that athletics still can’t do much.

“I knew that we had the potential to be this successful, but was not sure how soon that success would come,” Champ said. “Knowing that all of the hard work we put into the program was paying off was extremely satisfying.”

“We are limited in our capacity,” Asquini said. “We are limited at what we can provide to these teams as they progress and develop. We’re trying to figure out how we can help these club teams that are succeeding maintain that high level of success or take that next step.”

Looking to the future of Ryerson Curling, Asquini states that Ryerson has never elevated a club team to varsity status before and is unsure of what the process would look like. However, he acknowledges that a proven track record of success must be demonstrated by a club team for Ryerson Athletics to even consider supporting them fully.

With their back-to-back trips to nationals, it appears the men’s and women’s clubs are starting to earn the track record Asquini described. However, athletics still can’t commit to funding, Asquini said, though he stresses that Ryerson will do all they can to support its non-varsity teams.

“Our mandate is going to be not having student-athletes miss out on opportunities to compete for championships,” he said.

As for remaining a club team at Ryerson, Champ says that he and the rest of the men’s curling team are not focused on their status right now.

“Our focus will be on winning a medal at the U Sports championship at the end of the month and hope that it can help move that process along,” Champ said.

The championships begin on March 24 in Leduc, Alta.