By Peter Ash and Christian Ryan

In April, the Ryerson Rams women’s volleyball team defeated the Alberta Golden Bears in an epic five-set battle to claim the U SPORTS national title in Quebec City.

With a 25-0 record across the regular season, playoffs and nationals, the undefeated record saw the name “Rams” adorn a national trophy for the first time in a history that dates back to the university’s founding in 1948. 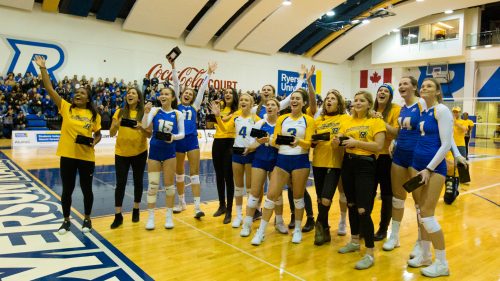 On Oct. 25, the team unveiled their national championship banner ahead of their home opener against the Brock Badgers. In front of a nearly sold out crowd at the Mattamy Athletic Centre, Rams captain and U SPORTS Final 8 tournament MVP Theanna Vernon helped bring the curtain down.

Even though the team was focusing on the task in front of them, the middle blocker said that most of her teammates were still slightly thinking about the moment.

“It was so surreal,” Vernon said while talking about the unveiling of the banner. “Just seeing all of the support in the gym made it so much better…it was amazing.”

Much of Ryerson’s national attention had been on the men’s basketball team, who have competed in back-to-back gold medal games in the U SPORTS Final 8 tournament. As they conceded the victories and accepted their silver medals, the women’s volleyball team was on the verge of university history.

The impact the victory had on the program was drastic, as highly touted prospects and players from other schools started to bat an eye at the recently successful program.
This season, the team received seven new players, with two of them being notable transfers: fourth-year players Sara Piana and Brett Hagarty.

Piana was named the best player in the province last season, winning the Ontario Colleges Athletic Association (OCAA) player of the year award as a member of the Loyalist College Lancers.
Hagarty, who took three years off from volleyball after playing for Queen’s University, decided to make her return as a Ram. During her time with the Kingston-based institution, the Aurora, Ont. native was considered to be one of the better players in the province, making consecutive all-OUA second team appearances in 2014 and 2015. 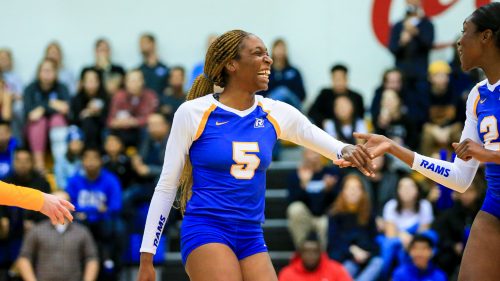 They both made an impact in their home opener, much to the approval of Rams head coach Dustin Reid. “I think they were both great,” Reid said of the team’s two transfers. “We played some preseason games, but obviously the intensity wasn’t there like it was tonight.”

The other recruits were all highly touted first-years in Teodora Vukovic, Katelyn Grasman, Lauren Wong, Adrianna Chiofalo and Samantha Cyrille. Given the additions that they’ve received and the current core that they have now, Reid also said that their experience can only help the team keep their momentum.

“It was good for them to get a taste of what’s to come and I think they’re going to continue to get better.”

Now with the season underway, the team will look to continue surging toward another national title. Although it won’t be easy to quickly put aside, Reid said that his team will be looking forward to getting back to what they do best.

“It was a tricky night tonight. We don’t play on Wednesdays very often. We’ve been training for seven weeks leading up to seeing the banner raised.

“There was a lot of emotion in the gym that we won’t see in any other game, so I’m looking forward to getting back to our normal routine [which is] preparing for Friday and Saturday night matches and we’ll go from there.”