The Office of Sexual Violence Support and Education launched a consent training module for first-year students on D2L as a part of the larger Ryerson campaign called Consent Comes First.

All program directors and chairs receive an invitation to enroll their first-year students and they can choose to opt-in. Once they enroll their students, it automatically appears on the D2l homepage of every student, and they can decide whether or not to take the course.

“What’s interesting about this module is that it provides important information on consent, relationships and support services in an easy to understand language,” said Melissa Ford, one of the coordinators for the Sexual Assault Survivor Support Line (SASSL) and third-year child and youth care student.

While the module is optional, students are encouraged to participate in it, Ford said, who added that at Ryerson SASSL helped provide information for some of the content along with students and faculty across campus. 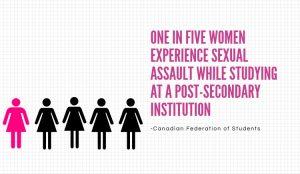 According to a fact sheet from the Canadian Federation of Students – Ontario from 2015, one in five women will experience some kind of sexual violence while attending a post-secondary institution in Ontario.

“It is no understatement that sexual assault continues to be a very serious issue at every single college and university campus in Ontario,” the fact sheet states.

The new module is separated into four sections: How we foster relationships, how to do bystander intervention (or as Ryerson calls it, community care), how to support someone when they disclose sexual violence and resources on and off campus.

According to Farrah Khan, the manager of Ryerson’s Consent Comes First campaign, 1,347 students have completed the module so far, while 9,851 total are enrolled. “It’s not as much as I would like, but I also think that [it’s] a start and we have to look at this as the beginning of a conversation,” Khan said.

Khan explained that from May-August 2017, the Office of Sexual Violence Support and Education developed focus groups with students about what it would look like to build a campaign against sexual violence. Much of the content in this module is based on what came out of those focus groups.

Khan said the content focuses more on how to act in situations that involve sexual violence, rather than just explaining the definition of consent.

“Too many times, students are told they don’t understand what consent is, when I think they practice consent all the time,” she said.

Khan added that there are many day-to-day ways in which students give consent. She gave the example of when parents add their children on social media but they don’t accept the request, they’re exercising consent.

Sophie Drummer is a first-year sociology student who completed the module. She said she heard other people on her residence floor talking about it and then saw it on D2l, so she decided to try it.

“I was honestly surprised by how much effort they’re putting in to really push the idea that consent comes first because it is such a problem in university, not only with first years but with everybody,” she said.

Drummer said that what struck her the most about the content of the module was how many resources are available to students.

“It was strange knowing that there are people there that will help you no matter what, even if you don’t feel like the stuff that’s happened to you actually falls into the category, they’re still there to answer those questions for you and to be there as a support.”

When students complete the module, they receive a certificate, which Khan says will help students with job opportunities in the future.

“In this time, it actually shows initiative and shows that you are ready to work in the community if you’ve actually done training like this. A lot of organizations are looking for that,” she said.

Khan added that since the Ontario PC party repealed the 2015 sex education program, providing students with information is more important than ever.

“We’re in a time where we’re not seeing people in high school and grade school learning about consent. It’s been taken out of the curriculum again and I think that’s a challenge and so we’re trying to find multiple ways for students to have information around this.”

She also said there are other programs in the works for the future. This includes a staff module that is scheduled to launch by winter, as well as a module for graduate students that should be out by May.

Khan said one in three women and one in six men experience sexual violence in their lifetime, and community members should do what they can to educate themselves on how this impacts the people around them.

“Even if you feel like it’s not connected to you, it’s connected to someone that is close to you. And so taking a module like this helps you be a better community member, and also a better partner, and also an employee,” Khan said. “This is not an issue that happens somewhere else, it happens here at Ryerson and we want to be a community that knows how to take care of each other.”