After a spike to the floor, the scoring team erupts into applause and laughter. At once, the opposing team does the same.

Brooke Williams is not surprised. “That’s volleyball,” she said.

Williams, a fourth-year nutrition and food student, didn’t always feel this positivity around organized sports at Ryerson University. It’s exactly the reason she started the new Women in Sport program.

While participating in Ryerson’s intramural sports programs, Williams often felt singled out or excluded as the only woman on many of her teams. Whether it was being referred to only as “the girl” or being benched at crucial points in games, she wanted to know if this was something other women in intramural sports were experiencing.

“People play sports in high school, and if they come here and they stop playing—why? I just wanted to make a place where women could come and feel comfortable playing. It [didn’t] seem like the current environment was that.”

Williams approached Ryerson Recreation to address the issue and to suggest a solution: she would conduct a research report gathering the experiences of women in Ryerson’s intramural sports programs and use the findings to develop a program. Intramural coordinator Randy Pipher and Recreation manager Andrew Pettit recognized the opportunity and brought Williams on payroll. 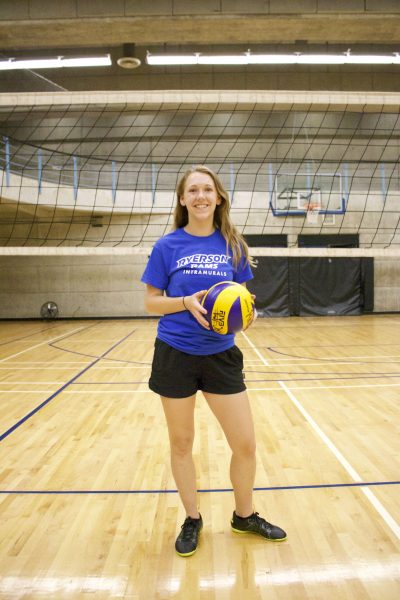 “A lot of times with these equity initiatives, the biggest challenge is getting people to understand there was an issue at all,” Pettit said. “It takes a deeper level of analysis or the lived experience of someone who has been excluded or marginalized to say something here should be different should be different, could be different, and what can we do about it.”

The report’s findings included the fact that women only made up roughly 20 per cent of the intramural sports program participants, with sports like hockey seeing only 15 females among the 300 total players. While Ryerson Recreation has made all-female teams and intramural leagues, the damage had already been done and few were signing up.

Williams used her findings to implement the Women in Sport program with Ryerson Recreation, a weekly program where women meet to play organized sport in a safe environment that ensures their participation and enjoyment. The program began with a volleyball match, as Williams finds it to be the quintessential team sport, but will decide the remainder of the program by “dotmocracy.”

“I just wanted to make sure that if I was going to make a program, that it would actually help the audience that it was created for instead of just be something that I came up with,” Williams, said on dotmocracy. “I have a bulletin board and everybody is going to put stickers that they want to play because it’s a multi-sport program. So they get to choose what sports they want to play instead of me picking for them.”

The first night of the program saw 16 participants, with all involved ensuring that everyone has their proper turn and receive opportunities to score and enjoy the game. The idea is not to eliminate competition, but to bring women together and allow them to build friendships and camaraderie with the idea that they could eventually band together and bring their teams into the intramural programs.

“I want women to meet through this program and hopefully create teams themselves and funnel into intramural,” Williams explains. “How do you meet people to create a team? This is a way to do that.”

For the students, the program provides a safe space to engage in athletics to promote healthy living with a chance to move into more competitive spaces. For Ryerson Recreation, it represents a shift in the program that they have been looking for, all sparked by an ambitious student.

“Rules change, but then culture lags. We’re picking up that culture now,” Pettit said. “Brooke did that work and we’re grateful for the courage of women to answer that call and say ‘I’m not happy with what’s been going on,’ because it’s not an easy thing to talk about.”

The Women in Sport program meets Wednesdays at 6pm in the Recreation and Athletics Centre (RAC). To sign up, click here.