It’s not common for professional hockey free agents to skate with the Ryerson Rams hockey team as they await a contract.

The Mattamy Athletic Centre is located in the downtown core—making it accessible for many Toronto-born players. Ex-NHLers in Akim Aliu, Brady Austin and Kris Versteeg have practiced with the team in the past, yet, it’s still sparse for the team to have an NHL free agent skate with them on a consistent basis.

What’s even more rare is to have that NHL veteran come in and take on a mentorship role, even as their hopes of returning to the big leagues dwindles with each passing day.

But the Rams players have been fortunate enough to get just that, having 10-year NHL veteran Joel Ward attend their practices, as the 37-year-old awaits his next hockey opportunity. 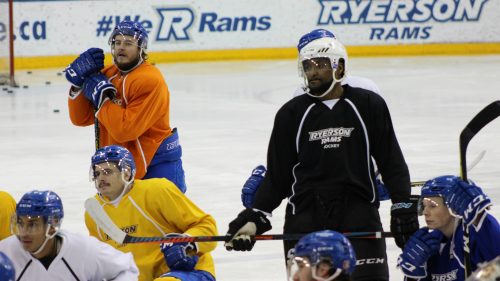 “It just kinda happened gradually,” Ward told The Eye in a sit-down interview. “I think a couple of guys seeked out [for] help here and there. I kind of knew some small stuff that could maybe help them going into games.”

Ward’s a well-known name among these parts for two reasons. First, he was a two-time 20-goal, 40-point player in the NHL, playing prominent middle-six roles on the Washington Capitals and more recently, the San Jose Sharks. Second, he’s among the most notable hockey players to have ever come out of U SPORTS, having played for the University of Prince Edward Island Panthers.

“I’m a huge [Washington Capitals] fan. He scored a Game 7 overtime winner against Boston [in 2012]. I kind of look up to him,” said Rams forward Steven Harland. “The first time [he came], I was kind of shocked. I told him that I love the goal he scored.”

When the six-foot-one inch forward reached out to Rams head coach Johnny Duco after he was released from a tryout with the Montreal Canadiens, it was a no brainer for Duco to allow his longtime friend skate with his team.

“He’s a great guy to have around our team,” Duco said. “He sets such a great example. He’s such an outstanding person.”

While Ward, an elite penalty killer in his prime, is an excellent addition to the team’s practice drills and scrimmages, it’s what he does after practice and away from the rink that has really cultivated the Rams.

When practice ends, Duco typically gives his players plenty of free time to work on their craft. For a player like Ward—still keen on landing an NHL gig—most would think he’d be using that time entirely for himself. However, that’s hardly been the case.

At practices, he works on individual skills with players, helping out with face-offs , scoring drills or board play. He’s also on the ice with the players until the zamboni gates open to flood for the next set of skaters.

Recently, the wingers’ training sessions started to become a hot commodity. “One day he was working with Hayden McCool and he ended up getting a hat trick the next game. The next day at practice, there was six guys lined up to do some drills after practice with [Ward],” Duco said. 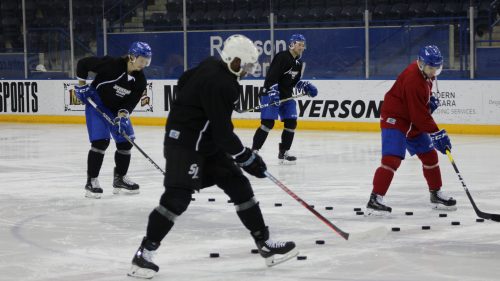 Once Ward’s one-two hour sessions are done, he’s not cutting all ties with his temporary teammates. He enjoys their company and mentoring them, even coming to watch their games from time to time.

When practice ends, he’ll often invite guys out for a meal, sharing his experiences of climbing the ranks of U SPORTS to where he is today. Ward knows the grind of playing collegiate hockey and the headaches that can be caused from juggling school, midterms, and for some players, a part-time job.

“I played pro and I tell guys all the time—they don’t realize how tough [U SPORTS] hockey is,” Ward added.

But he says the pain was temporary, and he carries the pride of completing a degree in sociology at the University of Prince Edward Island, forever. “A lot of people come up to me throughout the years of playing pro and say ‘kudos to you for finishing [your degree].’ Some guys don’t know what to do after hockey. [But] hockey can only go on for so long.”

Ward also says he’s seen a massive improvement in the quality of skill in U SPORTS, advocating for the national governing sport body and describing that players should “finish [their schooling] first.”

Going from U SPORTS to the NHL is an unconventional path, but it’s indeed a path. “He’s a great example for our guys that if you continue to work hard and continue to get better every day, you never know what may happen,” Duco said.

His experience with the Rams has almost been like a player-coach, of sorts. He’s not barking out drills and huffing and puffing on his whistle, but he’s teaching players, while implementing little tricks in their games, too. Those that know him best say he’d make a fantastic coach one day.

“He always had the leadership ability. He’s a very intelligent guy,” Ryan Hamilton, a former teammate of Ward’s with the American Hockey League’s Houston Aeros, told The Eye. “He knows how to communicate and relate with everyone in the room. He has that leadership balance of knowing when to push the right buttons.”

Could that entail him starting a career in coaching with the Rams? Duco certainly hopes so, stating that the team would “love to have [him] stick around and be a part of the team.”

Ward has an appreciation for the Rams coaching staff and says he doesn’t want to interfere. But if he’s still without a job in the springtime, so he may hop into the swing of things. “If they end up making nationals, I asked if I could hop on just to see them in action,” Ward added. “We’ll see how that goes. For the most part, I’m on the sidelines cheering them on.”

For the time being, Ward—whose pregnant wife still resides in San Jose—is still pursuing an NHL contract. He knows his chances are slim of getting back into the big leagues, but he’s not ready to give up the game he loves. Because of that, he’s not putting a firm deadline on when he’ll retire.

“It’s hard to have a date… maybe if I’m watching come playoff time and I’m not in the lineup, I think that may be my cue,” he chuckled.