Although the statement may seem like a cliché, it applies well to Ryerson Rams women’s hockey defender Laura Ball. “I actually wanted to be a figure skater,” Ball said, “Because they used to come on [on the ice] after us, but my dad was like, ‘you’re not a figure skater, you’re a hockey player.’”

Despite standing at just five-foot-two, Ball plays like she’s three times her size, employing an aggressive style of hockey that’s put her in the spot that she’s in today.

While on the ice, Ball makes sure to get in the corners, play in front of the net and go up against centres and wingers that tend to be much bigger than she is.
“Honestly, it just ran in the family,” Ball said. “My dad and my brother were the same kind of player.” 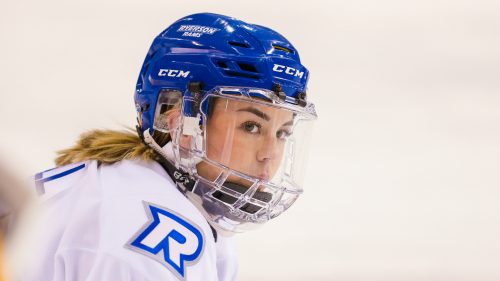 While playing in U SPORTS, Ball has worked her way from the lows of midget hockey to going up against some of the best the country has to offer. Ball credits some of it toward the fact that she had to play boys hockey at an early age, and also refers to her admiration of playing at a high level. Despite having to fight her way up as one of the few women in the league, she excelled, rising from the midget to double A level up until Grade 9.

“I was very, very fortunate. A lot of guys had my back and we [later] became friends. I knew it could definitely go down the other road where it’s like, ‘Oh, you’re a girl playing hockey’ or a lot of other rude things that could come out of that.”

Ball’s determination to win has made her a staple in the Rams’ blue line over the last three years. Playing with her heart on her sleeve, the stingy defender ranked second on the team in penalty minutes last season with 26.

“I love the competition, I love to go hard. I guess physicality is a huge part of my game, whether it’s playing the puck or getting in the corners…I was always taught to never leave the corner without the puck, so I just always want to win.”

However, getting to where she is now wasn’t easy. Her passion for the sport started as a member of the Toronto City Blues of the Greater Toronto Hockey League (GTHL). Throughout her four years of high school, she played for the Toronto Aeros of the Provincial Women’s Hockey League (PWHL). It didn’t take her long to make a name for herself as an aggressive force, leading the team in penalty minutes in 2014 and 2015.

By the tenth grade, she knew that the next big step was finding a school to play for. However, she didn’t feel ready to commit to a program.
“It was crazy, because I knew if I had to make a decision when I was in Grade 10, I wouldn’t have been here right now and I probably wouldn’t have been happy.”

Not yet interested in Ryerson, Ball was looking at NCAA Division I schools that were looking to sign her. After taking her SATs, she started to think about her academic aspirations and how that would make a difference in her decision.

“I was looking at St. Lawrence [Saints] and Yale,” she said. “My SATs weren’t quite as good to get into Yale, and at St. Lawrence, I would’ve had to take a fifth year because of my science mark in Grade 12.”

It was at that point in which she thought about if she was looking at these places for hockey or for school. Taking a closer look at her academic aspirations, she took an interest in Ryerson and its then-new RTA sport media program.

“I actually wanted to be a figure skater…but my dad was like, ‘you’re a hockey player’”

“When I was looking at Ryerson, I was really intrigued by [the program] and I said, ‘this is what I could see myself doing for the rest of my life.’”

Looking at where she stands now, Ball feels like she made the right choice. If she didn’t, her head coach, Lisa Haley definitely thinks so. “We had an eye on her since she was in the late stages of high school,” Haley said. “We knew she had an opportunity to play somewhere, but we were happy to get her.”

According to Haley, one of Ball’s biggest contributions to the team has been her ability to let her play do the talking, while still being vocal and recalling qualities of the team’s past leaders.

“When you look at someone like a [Alex] Rodriguez or an [Ailish] Forfar, you see the leadership qualities that they had. I think her play and the way she portrays herself is what makes [Ball] a good leader.”

Having two years of eligibility remaining, Ball is still looking to get their younger players into the same mindset that she and some of the other veterans tend to have. For Ball, it’s all about taking the team to the next level. Knowing what kind of talent this group has, she thinks that things can only get better for the program.

“[A season before] I came into Ryerson, they had just made the playoffs for the first time ever and had a good run against Guelph,” Ball said. “In my first year, we ended up having one of the worst seasons ever. So, that just always reminds me to never forget your roots and to never take anything for granted.