Jean-Victor Mukama is settling nicely into the role of the go-to scorer on the Ryerson Rams men’s basketball team this season.

Mukama has scored over 20 points in four straight games, including a game-high 24 on Nov. 23 in a 94-38 win over the University of Windsor Lancers at Coca-Cola Court. With the win, the Rams also improve their record to 8-0 on the season.

Heading into the campaign, there was some question as to who would fill the offensive void left by former Rams guard Ammanuel Diressa, who retired from university athletics in the spring. But, as the season goes on, it seems like the team has found the man to fill the role. However, despite his recent scoring outbursts, Mukama said that it isn’t the only thing that his new role requires him to do.

“I think with me, I just have to be solid all around. I’m a six-foot-eight guard and sometimes it can be defensively, sometimes it’s gonna be offensively,” Mukama said. “The coaching staff, my teammates, are just putting me in a position where I can be successful.”

Rams assistant coach Borko Popic was also happy with his forward’s performance, citing his ability to play well on both ends of the floor.

“JV’s performance certainly speaks for itself tonight,” Popic said. “Contributing [by] not just scoring but rebounding, distributing the ball in a variety of ways. So yeah, he had a big night and he’s certainly one of our leaders.”

Other than Mukama, the Rams used a balanced attack to overwhelm the Lancers from the opening tip, taking a commanding 52-18 lead into the half. But in the second quarter, the Rams got a little sloppy, forcing head coach Roy Rana to use a timeout.

“That’s what coach Roy does,” Mukama said. “[Rana] makes us understand…like we’re pretty deep, we’ve got a lot of players. If you guys keep playing like this, you don’t deserve to be on the court. Whoever’s gonna be on the court is gonna play hard.”

Someone who never has difficulty playing hard for the Rams is second year forward Liam O’Leary-Orange. When Rana inserted him into the game to raise the team’s energy level in the third quarter, he immediately took advantage, smashing two big dunks and adding another nice finish down low. When asked about what he was trying to bring, O’Leary-Orange said that he was looking to provide “energy, intensity.”

“Whenever the team needs me, just give them energy because I have to play above the rim,” he added.

In his two years at Ryerson, O’Leary-Orange has become known for his pregame dunking exhibitions, something that Mukama and the rest of the Rams feed off of. “I always tell him, when we’re flat, he’s [the] one guy, he can be valuable before we even start the game,” Mukama said. “When he’s throwing windmills and like the crowds going nuts, it’s motivating.” 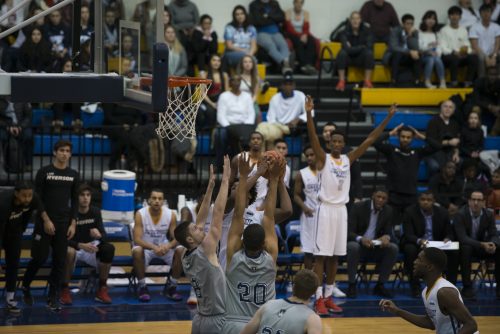 The Lancers struggled all night against the Rams’ defence, shooting just 23 per cent from the field. The only momentum they’d ever get would come in the aforementioned start of the third quarter. For Popic and the coaching staff, O’Leary-Orange’s energy made a big difference.

“He brought a lot of energy,” Popic said. “It gave us a spark, it gave us a boost and we were able to feed off of it and get our groove back in the third quarter there.”

Myles Charvis also had another nice game for the Rams, finishing second on the team with 11 points, while showing off his impressive ball handling that got the crowd standing up on their feet during the night.

The Rams have two games left before Christmas break, and for Popic and the coaching staff, there are always things to work on even if you’re 8-0. “[We need to] keep cleaning up our defence and our execution offensively,” the coach added.

UP NEXT: The Rams will welcome the Western Mustangs to Coca-Cola Court on Saturday Nov. 24. Tip-off is set for 8 p.m.