The Ryerson Rams won their OUA-leading ninth-straight game on Nov. 24, defeating the Western Mustangs 72-39 at the Mattamy Athletic Centre.

Both teams were coming into the second leg of a back-to-back weekend. The Rams defeated the Windsor Lancers in convincing fashion, while the Mustangs were blown out by the University of Toronto 82-59.

It was a sloppy first quarter from Ryerson, barely holding a 17-9 lead, which didn’t impress head coach Carly Clarke. “I thought we did not have great focus through some parts of the game,” Clarke said.

However, in the second quarter, Ryerson finally woke up from their slump. Led by their bench, the team drained five three-pointers on their way to a huge 47-15 lead at the half.

In the third quarter, the Mustangs were able to convert on five threes. But thanks to the Rams’ strong defensive execution, Western’s slight grasp of hope wouldn’t stand for long. In forty minutes of action, Ryerson held the Mustangs to 28 per cent shooting. 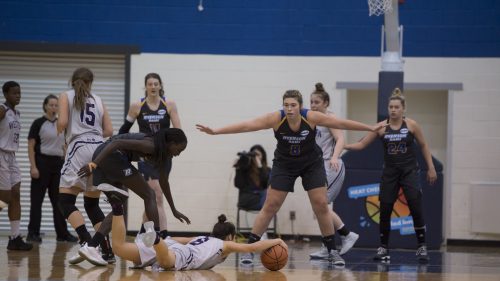 The Rams shot 43.9 per cent from the field, ended with seven three-pointers made and shot 87.5 per cent from the free throw line. Their bench also played a huge role in this contest, as they managed to score a total of 34 points. “[The bench is] a huge part of our success,” Clarke added. “Our roster is very versatile.”

It was a balanced offensive game from the home, as seven players managed to score at least six points, with the lone double-digit scorer being Sofia Paska who had 12. Despite her team’s successful efforts, Clarke was already thinking about the team’s next matchup, where they’ll head on the road to take on the Lakehead University Thunderwolves.

“It’ll be a tough environment for us…being on the road. We’ll identify the keys that we have to focus on to get ready for Saturday.”

UP NEXT: The Rams will travel to Thunder Bay to take on the Thunderwolves on Nov. 30. Tip-off is scheduled for 7:30 p.m.