The Ryerson Rams women’s basketball team played a strong game against the Windsor Lancers, taking a 78-47 victory on Nov. 23 at Coca-Cola Court.

In this contest, the Rams were led by big showings from Jama Bin-Edward and Sofia Paska. The second-year forward paved the way with 23 points on 9-12 shooting, while Paska contributed with 16 points, and was just one rebound away from a double-double in her third game since returning from an ankle injury. 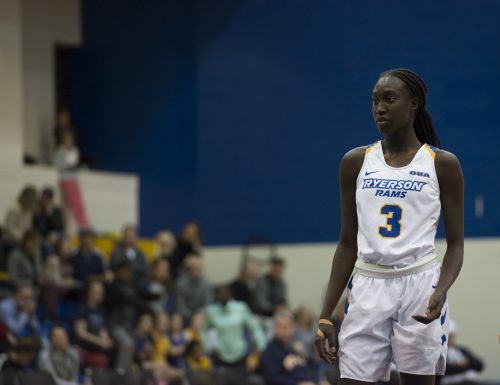 Veteran forward Hayley Robertson led the team with 33 minutes and played a big role in organizing the team on both ends of the floor. Ryerson’s win streak has grown to eight, but Robertson says that the teams focus isn’t on the perfect start.

“We’re trying to not focus on being undefeated,” Robertson said. “The coaching staff has been telling us about the process and how to get better, so we’re just trying to clean everything up. We want to peak in March instead of December.”

Although the result was lopsided, things we’re close after the first quarter, as Ryerson finished the opening frame 21-20. The crowd was engaged early, cheering each bucket in a back-and-forth frame that showed Windsor find their offensive rhythm.

The intensity quickly picked up in the second quarter for Ryerson, as they opened up a double-digit lead through great play on both ends of the floor from their bench.

Although their offense began to click, it was their defensive effectiveness that allowed the Rams to take a 13-point lead into the half. Ryerson forced the Lancers to a 37 per cent shooting percentage and 11 turnovers by halftime, setting the tone for the second half as they began to control the flow of play.

The dominance continued throughout the entire second half, a half in which Windsor was held to only 13 points and 16% from the field. With the combination of stout defence and dynamic offense from the Rams, the game was comfortably out of reach as the game entered its last moments.

The win was comfortable, but the Rams we’re faced with a dodgy situation in the second half when fourth-year forward Katherine Follis fell to the floor in pain, a sight that put concern on the faces of the Ryerson bench. With her recent injury history in mind, many feared for the worst, but she was able to walk off on her own and warm back up inside the tunnel.

“Coming off of two torn ACL’s, every time you hit the ground you think oh no, not again,” Follis joked. “But, I went to the hallway and warmed back up and everything was fine.”

UP NEXT: The Rams will take on the Western Mustangs on Nov. 24 in their second game of their home doubleheader. Tip-off is scheduled for 8 p.m.