Students look out at the water from the Queen's Quay boardwalk at the memorial Photo: Diana Hall
Reading Time: 4 minutes

Sarmad Iskandar was a charmer — a bright, multitalented and beautiful young man.

He was the guy whose “hi” in the hallway was enough to make everyone feel special.

His positive energy was unbounded, and he was widely known around the theatre school as “Mr. Hollywood.”

It was this memory that brought over 24 students, friends and faculty members from Ryerson’s Theatre School to the Queen’s Quay boardwalk Monday morning.

The friends, made up mostly of third-year acting students, went to pay their respects to their lost classmate and friend, who police say fell into Lake Ontario just west of the Toronto Ferry Docks.

Students and faculty members stared out at the water, and ducked into each other’s shoulders as they grieved.

Iskandar was pulled out of the lake shortly before 3:45 am on Friday, March 16. He was 20 years old.

Toronto Police 52 Division detective Sergeant Paul Rinkoff confirmed that Iskandar was with at least one other person when he leaned over the rails and fell into the water.

His friend immediately called for help, and Iskandar transported to Toronto Western Hospital where he was later pronounced dead.

Iskandar was in his third year at Ryerson University, working toward a BFA in performance acting.

The black and battered chains and metal rails lining the boardwalk’s edge are now decorated with a collection of orange, yellow and white flowers – daises and tulips among them.

A few of the flowers were cast silently into the water, attracting two hungry and curious loons. A few of the actors giggled as they watched the loons prodding at the gifts to their lost friend.

According to his workbooklive website, Iskandar’s family immigrated to Canada from Iraq in 1998. He attended Brother Andre Catholic High School in Markham, Ontario, where he “fell in love with acting.”

Making the trip to say goodbye to one of their own was Cynthia Ashperger’s idea. The director of the acting program at Ryerson says that it was important that members of the theatre school come together and grieve.

“I wanted us to see the place where this tragedy occurred,” Ashperger said Monday. “I think it’s important. It was very hard to accept the reality of this, when we saw him so alive and so vibrant on Thursday night.”

In fact, Iskandar’s former professor claimed that he was “exploding in his performance” – a talent that would have taken him in any direction he chose.

Teanne Teeft, a second-year performance production student, said that watching the actors in the rehearsal space without Iskandar was difficult – he had been with the group for his three years in the program.

“We were talking about stories on Saturday,” Teeft admitted, “and everyone thought that there was a ghost in the theatre school – but, it turns out that it was Sarmad. (He) was always the one at two or three in the morning playing piano upstairs in one of the rehearsal halls.”

“He was phenomenal. He made everyone look good on stage without taking away from himself. He knew how to accent everyone’s acting. When he was on-stage you couldn’t look away from him.”

Teeft said that even though she knew of Iskandar’s many talents, she will always remember him for his charming smile.

Ashperger describes Iskandar as having had an “absolute zest for learning, for life.”

Iskandar was taking on a main role in a period study performance of A Chaste Maid in Cheapside. Iskandar was playing the roles of “Man with chain”, “Man with Meat” and “Tim” – the shy guy, a side of Iskandar most people only got a chance to see on-stage.

This small group of third-year actors, as well as production students, have been together for six hours every day since rehearsals began in January. It’s unclear whether the show will go on without Iskandar.

“It’s so tragic when a person dies because the actor dies, the artist dies – and that we know when our performance ends every night, it (has) ended forever,” Ashperger explained. “You cannot replay that performance again. It’s ephemeral, it’s very much in the moment.”

Iskandar took this philosophy to heart when he wasn’t gracing the stage. Vasilisa Atanackovic, a second-year acting student at Ryerson, attested to Iskandar’s live-life-to-the-fullest attitude. Iskandar was one of her best friends in the program, who loved dancing, singing, and playing a game called “DJ Hero” (Iskandar’s version of guitar hero).

Atanackovic insists students, teachers and strangers alike will remember her close friend as an “all-around amazing” and “positive” personality.

“No matter if you knew him for a day, an hour, two years or ten years, if you met him … there’s no way that you could forget him.”

There is a Facebook group where friends are leaving messages and photos in Sarmad’s memory. According to the group, a funeral will take place on Wednesday at 11 a.m. at St. Luke’s Parish in Thornhill. There will also be visitation hours on Tuesday night at Highland Funeral Home in Markham. 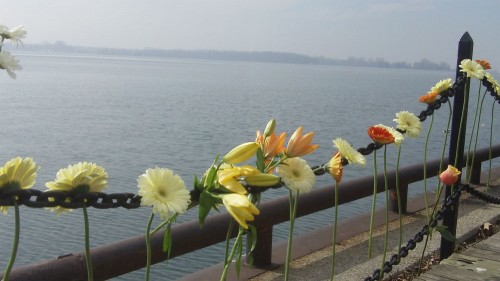 Flowers lined the Boardwalk at the memorial Photo: Diana Hall