Confused by the ways of healthier beings, The Eyeopener sent a writer on a weeklong only-organic binge. For seven days, Viviane Fairbank used organic shampoo, ate organic food and cheated minimally. The result may have been healthy, but it was also unexpectedly lonely

First, let’s talk about the smell. We’ll get to the tastes, the costs, the rest.

But first, let’s talk about the seven days that I spent in acridity. Because when we do talk about assuming an organic lifestyle – which, let’s be honest, isn’t often and is typically dismissive in tone — we don’t talk about deodorant made of beans, leaves and recycled aluminum. We don’t talk about how organic deodorant really smells like sweat, even before first use.

I tested the stick right after buying it — it beared a distinct smell of perspiration.

So I covered my armpits with stench for a week, all for the sake of organics. That was my first step toward understanding that living organic has very little to do with me and much more to do with everyone else.

That was my first step toward understanding that living organic has very little to do with me and much more to do with everyone else.

So much so, in fact, that living “organically” may be the most effective method of alienation on campus.

To be clear: organic does not mean a product is local, healthy or vegan. It means it’s a certified agricultural product. The Canadian Food Inspection Agency outlines the general responsibilities of organic merchandise as “protecting the environment, minimizing soil degradation, decreasing pollution, optimizing biological productivity and promoting a sound state of health.” I made sure to keep my week, from one Wednesday to the next, as normal as possible despite the added requisite. My diet was omnivorous and only partly healthy. It included beer, cookies and a lot of cheese.

Everything was certified organic and, despite the lack of sugar and additives, surprisingly tasty. Bashir Munye, founder and head chef of an organic catering company, thinks that personal health is the most important reason to eat organic. Munye and his enterprise, My Little Dumplings, have been part of the Ryerson farmer’s market for the past year.

On my first organic day, making my way among the market tables on Gould Street, I was still getting accustomed to the insolence of asking vendors, “Is your food made with only organic ingredients?” Munye was the only vendor in the market to answer yes. “Everyone has the right to eat like a teenager,” he says. “There’s no ‘unhealthy hell.” But [food that isn’t organic] is not good for the environment and not good for us.” Although eating organic can cause a nearly 90 per cent drop in pesticide level, according to a March 2014 study in Environmental Research Journal, the benefits would only exist if I maintained the habit — which I probably should, considering pesticides have been linked to cancer, Parkinson’s disease and several other health problems.

As we spoke about the many physical benefits of eating organic (“Look at me I’m living proof,” he told me as he spun his slender figure around), Munye did not sell a single dumpling. A few people slowed down, looked at his prices and kept walking.

A solitary dumpling with side soup for $9, no matter the lack of pesticides, is a hard sell. So, though I walked away with a delicious cremini mushroom bao and lentil tomato soup, I was the only one. In all, my week of organics cost $169.42 – compared to an average week of around $50.

That week, I also found myself alone sitting in class while others went on a Tim Horton’s run, alone cooking while others grabbed dinner at the pub and alone waiting for my organic food shipment while others stayed on campus to study. The delivery, provided by Mama Earth Organics, a local organic produce company, was the backbone of my food consumption for the week.

On Wednesday afternoon, a tall, shaggy young man dropped off a large, plastic bin full of farm-fresh fruits and vegetables at my apartment doorstep. The company, which delivers local and organic produce once a week, has been in operation since 2007. The deliveries ran me $27.50 (plus a $10 sign up fee) for the week. 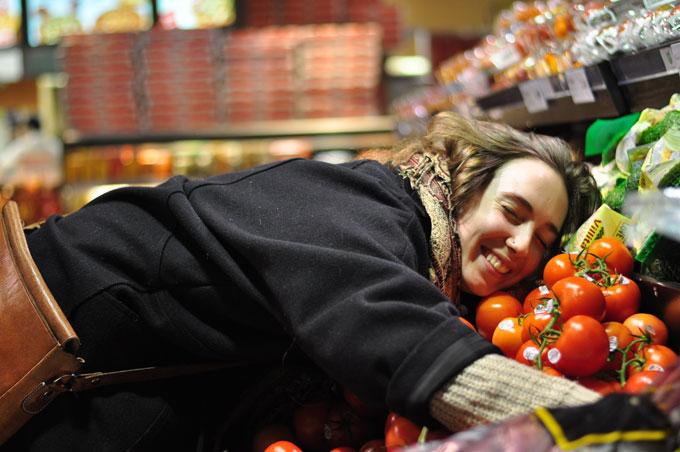 A growing awareness of food production introduced the business to new clients in the GTA who are looking to avoid pesticides and genetic modification and to support local Ontario farmers.

“If we don’t reverse the trend of large-scale, pesticide laden, intensive farming now, there may not be an option to in 10-15 years.”

“If we don’t reverse the trend of large-scale, pesticide laden, intensive farming now, there may not be an option to in 10-15 years.”

So goes the argument for most supporters of the organic movement, I found.

Organic food and products keep our environment as healthy as possible while supporting local economies. It’s not about buying organic then, but about buying local organic. Physical health comes only as a second priority.

On a hunt for organic bath products at Cabbagetown Organics on Parliament Street, I realized that it is often hard to identify the local organic and even more challenging to afford it. My small bottles of shampoo and conditioner cost $10 each, as did my pungent stick of deodorant.

Even then, the shampoo in question was mass-produced by a single company nationwide and then distributed to local stores. My hair did not become any softer during the week, though it did feel nice to know that I was rinsed free of harmful chemicals. I came home that night with a bag full of organic cheese, yogurt, crackers and soap. My roommate offered me a beer. I refused. He offered me some of our leftover pizza from the previous week.

I declined again. I started making myself an organic Greek salad and popped open a bottle of local, organic beer.

“It’s a fucking myth,” he told me once we started talking about my organic diet. Like most students, his main obstacle toward being organic is the price. Besides, he says, he isn’t convinced that there is a quality difference between the mass-produced organic products that are found on sale at the grocery store and cheaper, nonorganic food.

One day, when he’s rich and he can own his own farm, he says, maybe he’ll switch.

I have to admit that I didn’t make it through my seven days of organic solitude without a slip. Invited to a friend’s house for Thanksgiving dinner on Sunday, I couldn’t stomach the faux pas of bringing my own separate, organic meal to the table.

I contributed some squash and potatoes from my Mama Earth bin and in turn ate a pesticide-filled, genetically modified turkey with cranberry sauce.

I contributed some squash and potatoes from my Mama Earth bin and in turn ate a pesticide-filled, genetically modified turkey with cranberry sauce. Sitting at that table with a forkful of potato, turkey and cranberry was the most sociable moment of my week.