By Brennan Doherty and Keith Capstick

Transform Ryerson will be the governing slate for next year’s Ryerson Students’ Union (RSU) executive, after sweeping all five executive positions on Wednesday night.

Bartlett says that in the short amount of time she’s had to think about it, the feeling of being president is just starting to set in, and that there has been a lot of positive feedback from the campus community.

“Obviously, there’s still that window of recounting the ballots, those sorts of things … so I guess that’s going to be when everything sinks in. But right now, everybody’s just riding the excitement, riding the energy,” Bartlett said.

By the time the count finished, all of Unite Ryerson’s presidential candidates had been outvoted by more than two-to-one. 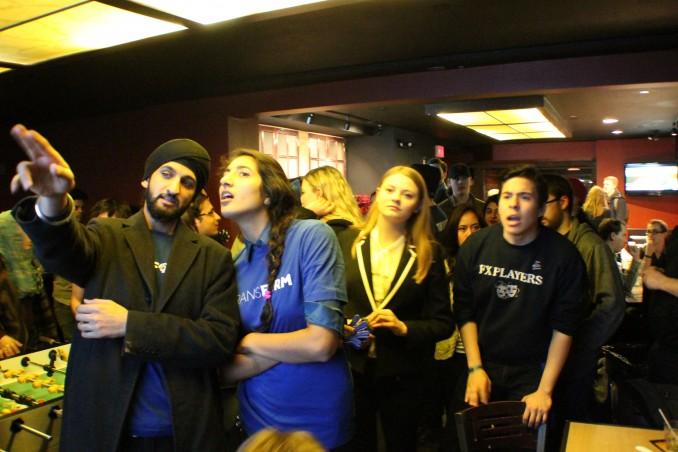 Transform Ryerson won both the Faculty of Communication and Design (FCAD), and the Engineering Faculty outright.

Dozens of candidates, supporters, and student media packed the back corner of the Ram in the Rye where the RSU had set up a projector to broadcast results as they came in from the Chief Returning Officer.

Over the course of the evening, the Twitter hashtag #RSUElections reached as high as the third highest trending hashtag in Canada.

In stark contrast to past election nights, The Ram’s back room was packed as votes poured in for more than seven hours.

The Eyeopener asked Bartlett what she would do next year to improve the election progress and avoid some of the troubles she and her team have had. “I think we need to explore online voting,” said Bartlett. “The most important thing is communication, making sure everyone is on the same page before the election even starts. You’ve got to dot all your I’s and cross all of you T’s,” Bartlett said.

Check out our full coverage here.

The RSU Facebook page lists the final unofficial results of the election as the following: