Ryerson opened a new study space on Sept. 15 for graduate students to work without having to be silent.

Anthony Bonato, associate dean of students and programs in the Yeates School of Graduate Students, welcomed over 50 students to the grand opening of the GradSpace on Gerrard Street.

“This is the biggest GradCafé we’ve ever had, we usually have about 15 students,” he said.

Unlike the silent floor at the Student Learning Center (SLC), this grad space has no volume limit and the open layout encourages communication.

“This is networking, and we really want our grad students getting involved with that,” Bonato said.

The building offers grad students an open floor for group projects or individual study, first-come first-serve lockers to give the students a permanent space, and offices that can be booked for events or meetings.

Students like Lakmini Perera, first-year electrical engineering MASc student, look forward to working in the new open space as opposed to the quiet limitations in the SLC.

“I’m going to come as often as I can, I also want a locker upstairs,” she said. 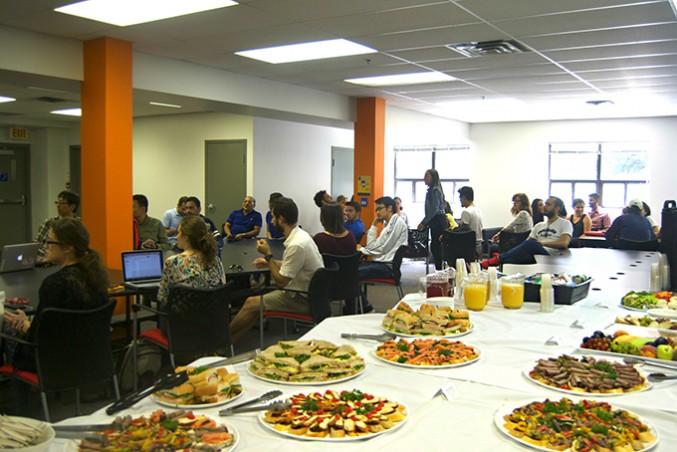 Other students like Trevor Empey, first-year urban development and planning grad student, are not as pleased with the aesthetics of the building.

“Compared to the SLC I don’t think it’s as nice or as comfortable, it’s an older building obviously,” he said.

The time limit of 7 a.m. to 11 p.m. could also be a potential issue, particularly during exam time.

“I would like to have a space that’s open later at night to study, especially in hard times,” Empey said.

Instead of having a 24/7 workspace, the grad building hours are limited to avoid having students use the rooms as a residence.

“The space is not for sleeping,” Banoto said during his speech.

The location of the building is 111 Gerrard St. East, which also raised some concern. However, Banoto informed grad students that it had the lowest cases of security incidents on campus, according to security.

Whether or not students are excited about the new space, it’s still a networking opportunity for grad students to share innovative ideas.