The Eyeopener kicks off a brand-new series examining the stories of Ryerson’s varsity team captains. This week, Bryan Meler explores the dynamic between the three co-captains of the men’s basketball team.

What started off as a teenage friendship on a summer team has become one of the fiercest three-headed monsters in Ontario University Athletics (OUA) men’s basketball.

When they first started sharing a court together while playing for the Amateur Athletic Union’s Northern Kings in 2011, they never imagined they would be where they are now. Almost six years later, Adika Peter-McNeilly, Ammanuel Diressa and Juwon Grannum share the responsibility of being the co-captains of the Ryerson Rams men’s basketball team.

It’s a scenario that didn’t cross their minds when they toured the U.S. playing tournaments as 16- and 17-year-olds. A lot has changed since then. They’ve all graduated high school, won Ryerson’s first OUA Championship—a feat they accomplished last March—and now they’re leading a team; one that looks ready to finish their current regular season on another historic note. 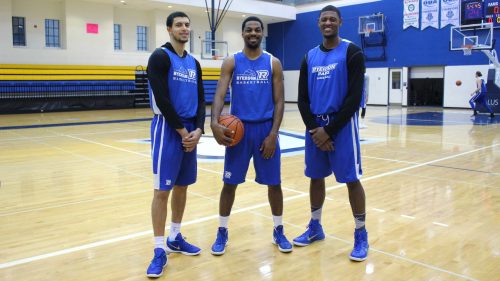 “I think this is the strongest leadership group we’ve had since I’ve been here at Ryerson,” said Roy Rana, the head coach of the Rams men’s basketball team since 2009. “All three of them are great guys, and I’m just happy we have them these types of characters in our program.”

Rana says that leadership comes in many different forms, which allows his captains to be who they are as leaders. He says that all three of them have proven their work ethic throughout their time at Ryerson, but it’s their differing personalities and leadership styles that have shaped the look of their team this season.

“Manny is a bit more introverted, introspective. Adika is the opposite, more out-going, much more spoken, while Juwon brings us a bit of both,” said Rana. “Between the three of them, we capture a lot of what we want as a team.”

The trio’s leadership style has been described by Rana as “collaborative”, with all three stepping up where and when they feel comfortable. There are no egos, according to Grannum. Instead, it’s been their ability to accept each other as leaders that has propelled them forward while striking a successful team dynamic for a roster with a lot of new faces.

“We’re obviously all good at different things, but it’s all for the bigger picture,” said Grannum. “We’re content with scoring zero points or [whatever] points, because it’s all about the end picture, and getting the win.”

While they’ve also lost key players like Kadeem Green, Jean-Victor Mukama, and last year’s co-captain Aaron Best, the Rams have still managed to carry on their championship culture this season behind their new group of leaders. Grannum, the only forward of the three, says having leaders at different positions has also helped their team gain chemistry, since it gives younger players more of an opportunity to learn from a veteran at their position.

Whether it’s Peter-McNeilly telling his teammates to keep their heads up, Diressa coming to the gym hours before a practice to work on his shot, or Grannum calling out defensive assignments, they all lead by example.

“Our ability to hold each other accountable has been really important for us this season,” said Grannum, who has spent all five years of his OUA eligibility in a Rams uniform. “We want everyone to feel like they have to a chance to have their say. That’s the thing about Ryerson, no one feels like they’re superior over anybody else.”

Peter-McNeilly is the only one of the three to have been a co-captain for more than a season. He earned the responsibility in 2015 after coming to Ryerson from Clarendon College in the U.S. for the 2013-2014 season. Peter-McNeilly joined Best, a co-captain with a quiet demeanor who—despite a personality exactly opposite to his own—helped Peter-McNeilly become the captain he is today.

“Aaron wasn’t the most vocal leader, but he’s the type of leader that was going to come out and work hard whenever he put on his shoes and practice jersey,” said Peter-McNeilly. “If the best player on your team is doing that, it puts everyone else in line.” 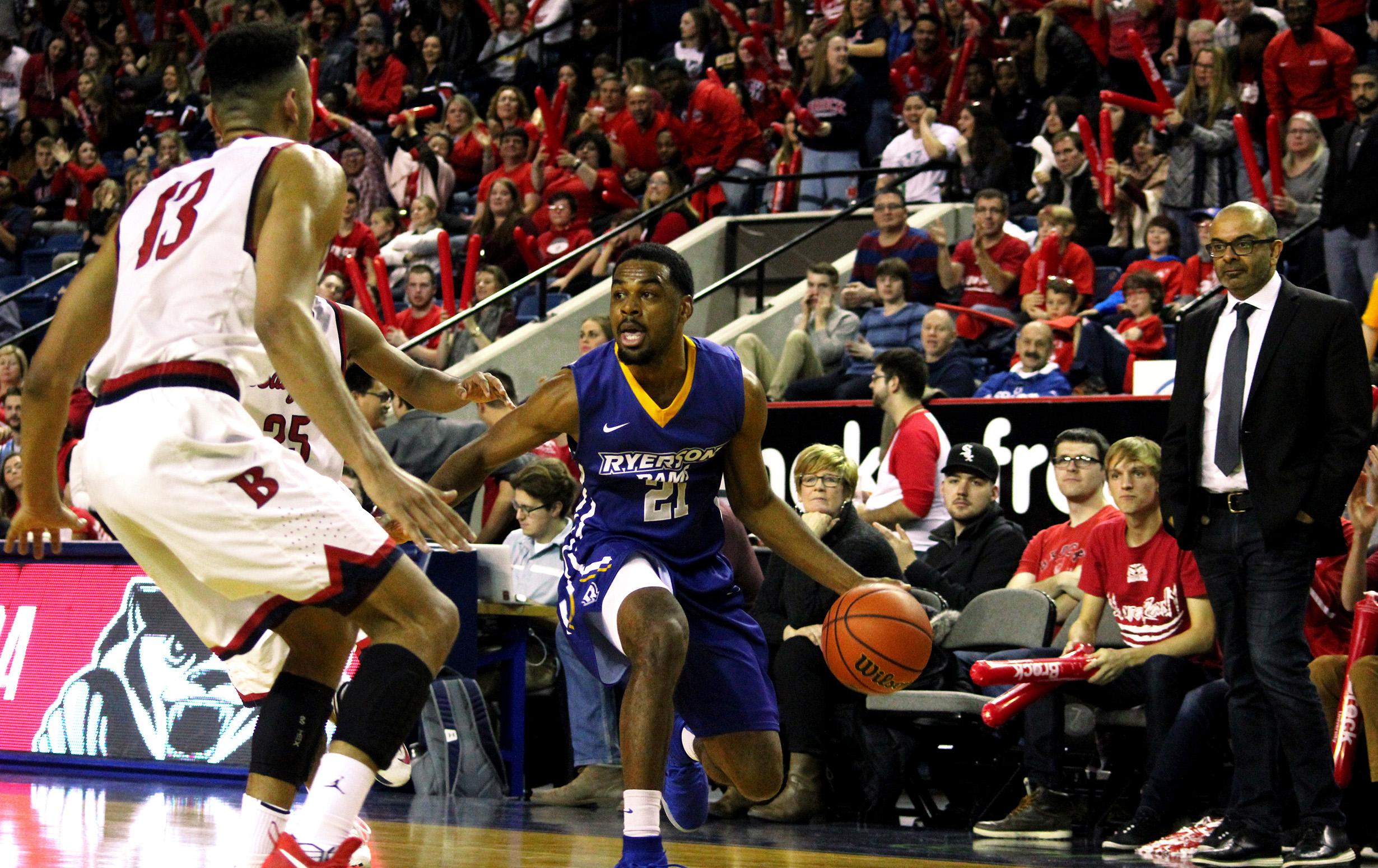 Last year, Best led the Rams to the school’s first OUA championship in his final season, retiring as the third-highest scorer in Ryerson men’s basketball history. Coming into this season, Peter-McNeilly—who recently became the ninth Ram to reach 1,000 career points—knew that he and his co-captains had big shoes to fill.

“You just want to be as great as him,” said the fifth-year guard. “I just took that attitude this season, wanting to come in every single day and work hard, even if I had some nagging injuries, so everyone can see that we all need to put in the work if it’s going to pay off.”

So far, it has paid off. The defending OUA champions hold a 16-1 record and the first seed in the OUA East with two regular season games remaining. They’re in a position to finish the regular season with the most wins in program history after starting the year on a 13-game win streak.

That streak came to an end on Jan. 27 when Ryerson was upset by Brock 74-65. The game stood out as a wake-up call for the team, according to Diressa. The former Tennessee Tech product, who joined the Rams in 2015, didn’t allow his team to lose focus after their first loss of the season. Rather, he placed renewed pressure on himself to be a strong captain for his teammates.

“Whatever we want to do when it comes to implementing change, it starts with our leadership,” said Diressa. “It’s about being the example in practice, then continuing to work hard in games.”

The Rams have won three straight games since that loss to Brock, but they know they have a tough road ahead. Ryerson’s last two regular season games are on the road against Carleton and Ottawa, two of the top teams in Canada. After that, the Rams will be facing their toughest challenges yet in the OUA playoffs, a stage they’ve been preparing themselves for since the beginning of the season.

It’s at this time of the season when the Rams leadership will have to be at its strongest. Ryerson’s challenge this year is two-fold: defending their OUA title while chasing the dream of the school’s first national championship.

“I chose to come to Ryerson because I really wanted to learn from guys that were the best like Adika, Manny and Juwon,” said Keevon Small, one of four Rams rookies this season. “Being part of this is special, especially knowing what we can do as a team this season.”

Expectations are bound to be high, especially with Peter-McNeilly and Grannum graduating at the end of this season. The former—known as the extension of the coach—and the latter—referred to as the team’s ‘glue guy’—will be leaving a squad they’ve helped transform into the powerhouse it is today.

Their departure will leave Diressa as the only remaining co-captain, a thought he says hasn’t crossed his mind. Instead, Diressa, his co-captains and their teammates are focused on taking advantage of a situation that still seems too good to be true.

“It’s been great playing with guys who I’ve been comfortable with since high school,” said Grannum. “It’s become a brotherhood, with basketball really feeling like an extended family.”