I live on a crescent street, which is just a fancy way of saying that I live on a dead end that’s shaped like a circle. As a kid, my parents—who have managed to raise four other children—never let me leave the perceived safety of the circle without them. This continued until I was about 12 years old, when they told me, “OK, now that you’re older, you can go to the end of the street.” All the way to the end of the street? “Wow,” I thought. “I’m really moving up.”

This rule instilled a fear in me of what would happen if I went somewhere alone, until my first day at Ryerson in fall 2015. I was a plucky little thing with a massive backpack and perpetual resting bitchface. I was wearing an embroidered navy tank top, crisp white shorts and new running shoes. (I’m not sure why I needed the new runners. I never exercise, but my dad said a lot of people wear runners on their commute, and I wanted to fit in.)

My parents hugged me goodbye and dropped me off at the Clarkson GO station in Mississauga.

There I was, on my way to Toronto, a city I’d never visited alone. I was expected to ride the train and walk to Ryerson, all by myself. I’d gone over the route on Google a million times and talked it through with my parents. I had pictures of the trip on my camera roll and I drew a map that I kept in my pocket. Should I suddenly be struck with amnesia and lose my phone, at least I’d have that sad, hand-drawn map.

I spend a total of two hours each day commuting—80 minutes on the train and 40 minutes walking. I have class five days a week, and come to work on Sundays at the newspaper you’re reading right now. That means each month, I’m commuting for 48 hours, or 2,880 minutes. That’s two days. Two days of just getting somewhere. And all for the low, low price of $149.60 a month. 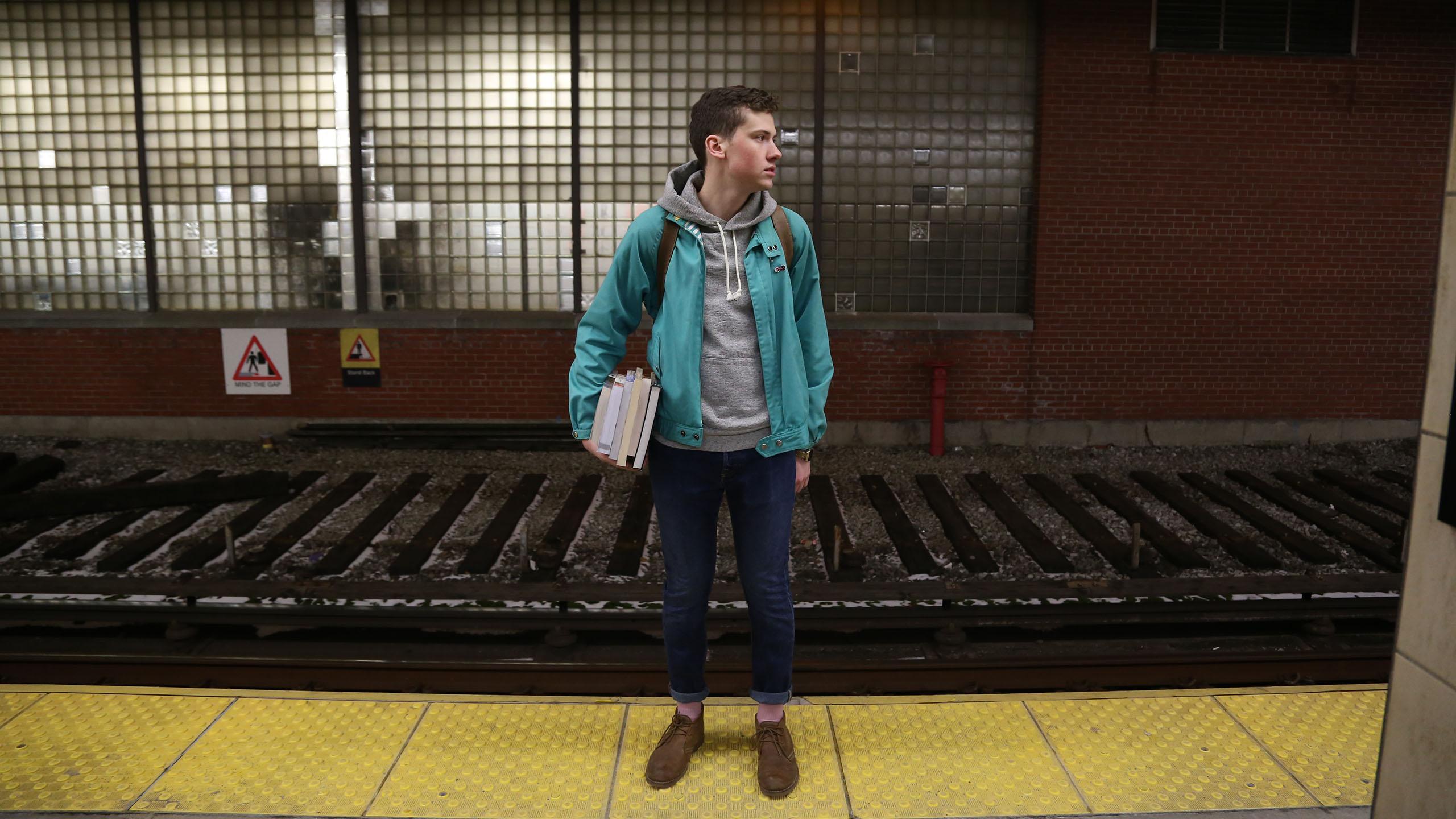 What can you do in 48 hours? You can watch 125 episodes of Friends, which is an excellent use of your time. You could listen to the audiobook of Harry Potter and the Prisoner of Azkaban—the best of the Potter series—four times over. If all goes well, you could drive from Ryerson to New Orleans and back with a few hours to spare.

But instead, you’re probably stuck sitting on a train, a bus, a subway or a streetcar. Bet you wish you were watching Friends instead, huh?

A 2015 survey conducted by StudentMoveTO asked 15,000 students from Ryerson, OCAD University, York University and the University of Toronto how they got to school. On average, it found that 33 per cent of all students spend two or more hours commuting each day.

Raktim Mitra, assistant professor in Ryerson’s school of urban and regional planning, says that Ryerson averaged the highest distance between students’ homes and campus. “Everyone commutes,” Mitra says with a laugh.

And that’s part of what makes being here so unique.

E ach morning, afternoon and evening, students travel to get to school, to get an education. Some are coming from five minutes away, and some are coming from three hours away. For many, it’s a long trip. Commuting, in turn, becomes a necessary evil, but that’s true with anything good: you have to give something to get something. Sell your soul for the price of TTC tokens, but get a degree in exchange.

Even worse, many studies have shown that commuting can lead to long-term health issues. According to a 2014 article in Time magazine, it can result in raised blood pressure, higher cholesterol levels, a higher risk of depression, lower cardiovascular health, poor sleep, back problems and lower overall life satisfaction. A more recent study released by England’s Royal Society for Public Health (RSPH) found that commuting can lead to a 55 per cent increase in stress, reportedly caused by a commuter’s lack of control during their commute, the unpredictability of delays and being in a crowded environment. These risks are more prominent in those who have a non-active commute (i.e. sitting on the train).

Researchers from University of Toronto also found that GO Transit commuters are at risk of exposure to carcinogenic diesel exhaust, especially those in the front car behind the locomotive. This exposure can be damaging to passengers’ cardiovascular, respiratory and nervous systems.

Reading that list feels like a crude infomercial, where a spiffy man with hair like a perfect swatch of toothpaste walks onto the screen and says, “Just in case it didn’t suck enough already, wait until you hear this!” For the record, if I ever met that man, I’d probably punch his toothpaste hair clean off of his body. Everybody knows commuting sucks, there’s no need to rub it in. 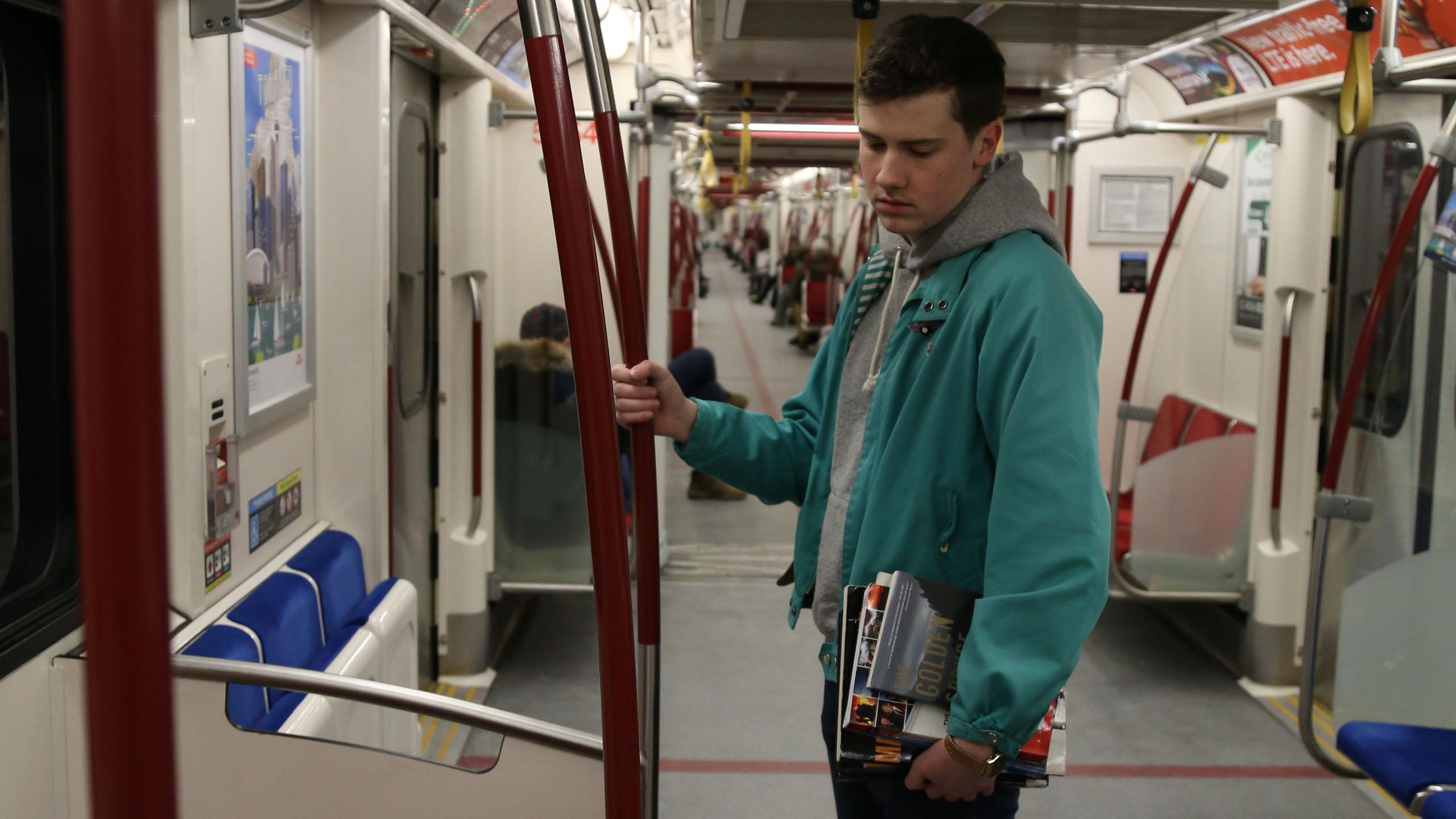 Anastasia Partserniak spends four hours a day, five days a week and 80 hours each month commuting. It costs her about $310—that’s roughly 194 small hot chocolates from Second Cup, or a flight from Toronto to New York (with $20 left over).

On her first day at Ryerson, her alarm blared at 5:15 a.m. and she woke in dismay. She had 15 minutes before she had to leave her house—10 to get ready and five for a quick breakfast and a cup of orange pekoe tea. She was out the door by 5:30 a.m.

Her parents drove her to the Hamilton GO station. The first-year architectural science student had everything planned down to the last second. But the train, it seemed, was on a different schedule. As soon as she stepped onto the platform, the doors closed in her face.

In her head, she meticulously reviewed her morning: alarm off, clothes on, food consumed, teeth cleaned, hair dealt with and backpack on. There was little room for error. She sat on a nearby bench and added another item to her routine for that day: waiting for the next train. She missed that one, too.

Thirty minutes passed. Her phone was out, and she obsessively reloaded the schedule to make sure she didn’t make the same mistake a third time. The train pulled up, and this time, she was on it.

Commuting is always unpredictable. For Taif Al-Badri, who lives in Guelph, Fridays are grueling. He usually stays with his friend in Mississauga during the school week, but on the weekends, he goes home to his family. Once, he left Ryerson at 6 p.m., happy his class ended earlier because it meant he’d arrive home by 9 p.m. The hour passed slowly on the bus ride to Streetsville.

It was late and Al-Badri was cold, tired and hungry. While waiting for his next bus, he walked to a nearby Popeyes and bought a poutine, figuring it would fill him up and keep him warm. It was from the window of the restaurant that he saw a bus pull into the station, stop briefly and pull away. Filled with dread, he sat down and ate his food, knowing it would be another hour until the next bus came.

When he finally stepped through his familiar front door, he glanced at the clock—half past midnight.

“Where have you been? Why did it take so long?” his mom asked in a panic. She waited up for him, as she’d done many times before. His phone died earlier that day, so he missed her calls.

He replied in one word, followed by a chuckle, “Commuting.”

The RSPH study found that commuting also results in a 44 per cent decrease in time spent with family. According to a study conducted by the University of Waterloo, the average Torontonian’s commute is 65 minutes, making it the highest of any city in Ontario. The average commute time in Ontario is 47 minutes, while Vancouver is 60 and Montreal is 62.

Because of Al-Badri’s commuting schedule, he spends three days a week with his parents and three younger siblings. He says lost time is stressful. Similarly, Partserniak often arrives home around 10 or 11 p.m. “It leaves no time for family,” she says.

C ommuters bargain with themselves every semester: do you sign up for an early class and wake up at an ungodly hour? Do you stay late for an event and run the risk of being stranded in the city because you missed your ride home? It’s a catch-22: miss out and get some sleep so you have the energy to wake up and commute the next day, or stay late and have a little fun, only to be worn out for your commute the next day. There’s no perfect solution, but some of my fondest university memories involve me being curled up in my blankets, snoozing the night away. I don’t stay out late for anybody. Even my funeral will end with an early night.

At the end of the day, maybe it took you 10 minutes to get home. Maybe it took you three hours. But that’s Ryerson. It’s early mornings full of coffee and a quick goodbye as you leave, and late nights of walking just a little bit faster, staying awake just a little bit longer. It’s seconds, minutes, hours, bike rides, footsteps, trains, buses and subways. It’s commuting.

When I was about four or five, I brought home a rock from the marsh by my house. With a blue Sharpie, I drew a crude smiley face on it and presented it to my father. To me, it was the greatest gift I could have ever given him, because who doesn’t like a nice rock? A few years ago, I found that rock on his side table. 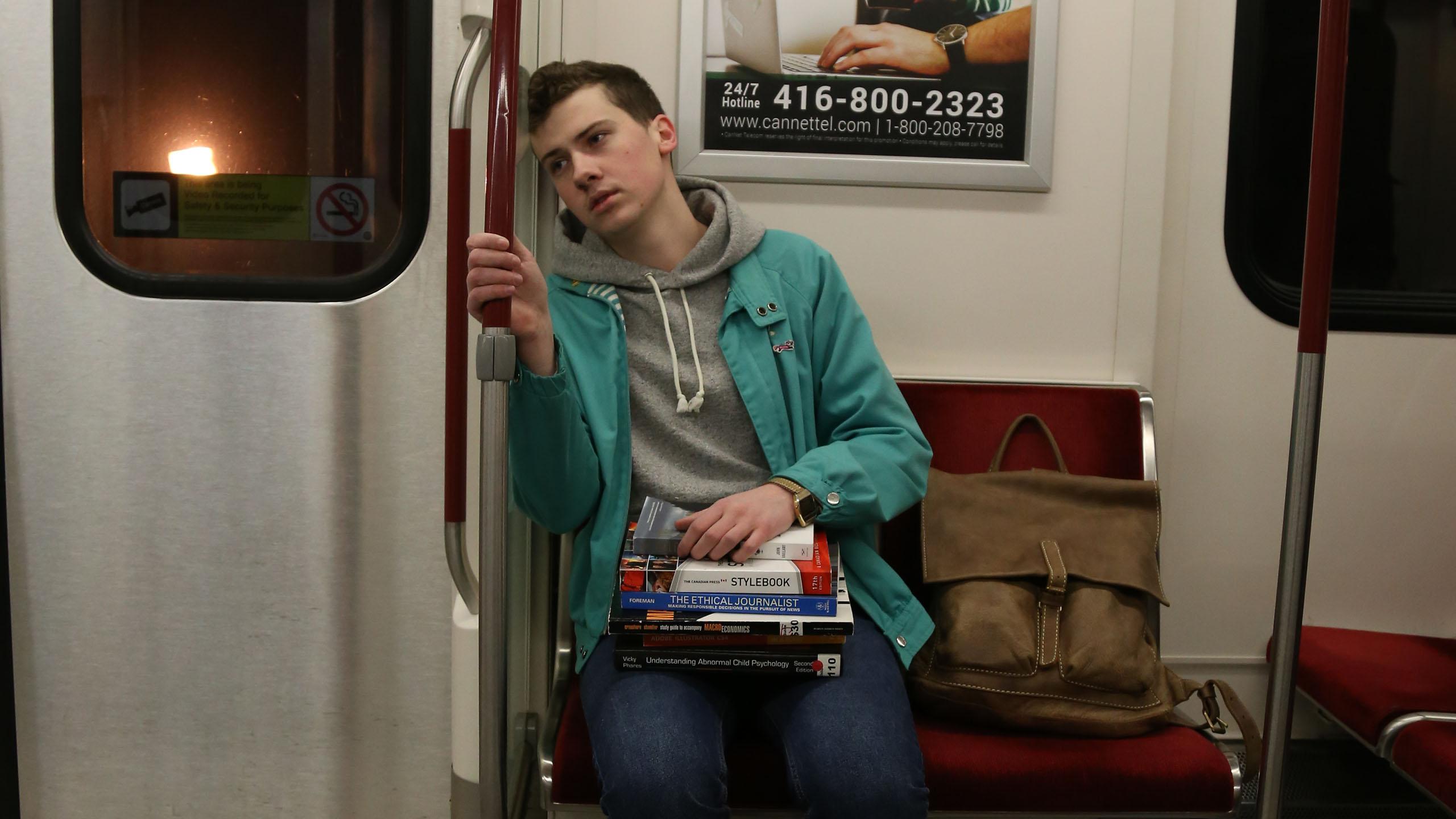 Commuting can take a toll on your health. PHOTO: DEVIN JONES

I picked it up and noticed the face I drew had almost faded, not with age, but with wear. My mom walked in and I asked her why he still had it. “He carried it around everyday when you gave it to him,” she says. “The only reason he stopped was because he was worried he would lose it.”

It’s 10 p.m. and I’m walking down the stairs of the Student Campus Centre after a long, four hour meeting. I feel like I’m ready to drop dead. I take out my phone and dial my house. I was up at 6 that morning to make it to my 8:30 a.m. class and I hadn’t spoken to my parents all day.

Sometimes my mom answers the phone, but after 8 p.m., it’s usually my dad. Sure enough, he answers and for the next 24 minutes he is my commuting buddy. I make the trek up to Union Station, bundled up in my bright pink coat and dark blue hat. My bag is heavy, full of notes, books, snacks and a fully stocked medical kit. My father lets me bitch to him about my day, which takes a while, because bitching is my forte, and I’ve perfected it over the years.

This happens about three times a week. For 24 minutes, my father is the smiling rock in my pocket. He keeps me occupied for my walk to the train. He makes me forget that it’s cold and dark and I’m all alone in the city. With his words, he takes the hand of the girl who couldn’t leave the circle of her street, and he walks with her to the train.