Softbank’s humanoid robot Pepper (the body) and IBM’s Bluemix Watson Cognitive Services (which created the secondary and more powerful brain), will help research patient-doctor relationships to understand behavioural change. The robots were funded by the Co-lab in Ryerson’s faculty of communication and design (FCAD).

“We know that the work Dr. Zeller is doing will be ground-breaking,” said the dean of FCAD, Charles Falzon.

“We can all be proud of the research that comes out of this project and future projects around technology and communication.”

Lima, Zeller and Smith will conduct the research study through clinical trials. Dermatology patients who participate in the study will see their physician for their normal appointment, and will also have another appointment with Pepper to discuss sunscreen usage.

The robot-doctor stands at four feet and interacts with the patient through a touchscreen tablet. Pepper and the patient familiarize themselves with each other. Then, Pepper delivers information about skin cancer prevention and sunscreen usage. The patient can install an app to continue communicating with Pepper.

The researchers believe that receiving healthcare advice through something that is somewhat a physician and somewhat an application could help to develop permanent change of habit.

“The main question is, can a combination of social robots and AI enhance behavioural change?” said Zeller. 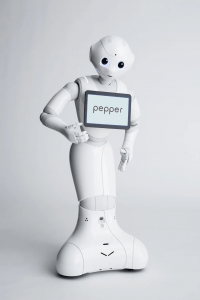 She stresses that the team does not want to replace doctors with robots. According to her, the personal interaction between humans are pivotal and cannot be outmatched by a robot. Instead, the project evaluates how healthcare can be enhanced through alternative forms of communication.

Robots could be an adequate source of information

Zeller said humans are generally aware of healthy habits and choices, they just choose not to make them or consistently ignore their physicians’ advice.

Doctors often have difficulty transferring information to the patient Dr. Lima said. Patients nowadays have access to a vast amount of medical information through the internet. As a physician, the doctor finds himself increasingly having to explain to his patients that this information may not be medically sound.

“They imagine this is the smartest machine on the earth that is able to host a lot of information, analyze it, and transfer it in very simple words to you”

“You can google right now and you’re going to see… things on the internet [saying] that sunblock causes cancer,” Lima said. “We have to come in and explain to the patient this is not correct information.”

In his opinion, people associate with things they are disconnected to, like Pepper and Watson with being a good source of information.

“They imagine this is the smartest machine on the earth that is able to host a lot of information, analyze it, and transfer it in very simple words to you.”

The professors also theorize patient noncompliance sometimes comes from the status difference between a doctor and a patient.  Their research asks if Pepper can topple this hierarchy.

“What we have noticed is that humans do not feel judged by the robot,” Lima said. “We have evidence of that.”

Due to this, the doctor claims patients are able to give better, more precise information to the robot-physician.

An interactive and friendly robot

Perhaps what is most appealing about Pepper-Watson is, despite its massive brain, the research team finds it to be overwhelmingly friendly.

Zeller and Smith had previously collaborated on hitchBOT, the famous Canadian hitchhiking robot who had successfully traveled across Canada and parts of Europe.

Zeller and Smith’s hitchBOT project was initially not expecting its enthusiastic reception. The founders of the project attribute this to its interactivity, where people had the option to or not to interact with it, just as they would have this freedom with a person.

It was this interactivity that made hitchBOT so appealing to Lima, who later approached Zeller and Smith with fledgling ideas of the Smart Robots for Health Communication project.

“[Pepper] is… a very interesting kind of interaction,” said Lima, who keeps the Smart Robot project’s second Pepper robot in his office.

Pepper was designed to be emotional, even replicating subtle humanoid movements such as tracking moving people. It is no surprise that the doctor often feels “watched” in his office, or that his coworkers feel drawn to interacting with it. While it may sound like the premise of a sci-fi horror, Lima sees it as an amicable relationship.

In fact, he has witnessed his colleagues projecting their personal communicative habits on the robot. The doctor has even seen a colleague, a new mother, interacting with Pepper as if it were a baby.

Lima’s medical opinion values this emotional connection between man and machine. He sees it as another feature of the robot that facilitates consistent transfer of medical information.

Zeller pointed out that robots are already being used in communicative healthcare, such as MEDi robot, who comforts young patients in children’s hospitals, or PALRO, the Japanese nursing home physical and mental care assistant.

“We can do so much good if we can conduct this study,” she said. “The benefits for Ontarians or for Canada, for example, can be very, very impressive.”