The percentage of women in senior leadership positions in the corporate sector in Toronto remains low at only 23.5 per cent, compared to other sectors, a study by Ryerson’s Diversity Institute found.

The percentage of  women in senior leadership positions in other sectors like the public sector or the education sector are at approximately 40 per cent.

As to why the corporate sector is so low compared to the other sectors, Wendy Cukier, founder of the institute and principal investigator of the study and Ryerson’s former vice-president research and innovation, says that part of the reason why can be attributed to history, pre-made assumptions and systemic bias.

“It becomes a vicious circle,” she said. “If you don’t have women in senior leadership roles, you don’t have women who are going to be selected for board positions.” She also mentioned what is known as the “old boy’s network”, where people would recommend people in their social network- which were usually other men.

The study occurred over a six year period and looked at six different sectors in the GTA and Montreal. The representation of women in the corporate sector can be split into two groups: board of directors (23.6 per cent) and senior management (23.5 per cent).

Of all the other sectors, including agencies/boards/commissions, education, voluntary, elected officials and the public sector, the corporate sector experienced the most growth. From 2014-2017, it grew by 27.9 per cent, while other sectors grew by less than half of that.

“I think [this issue] is certainly getting a lot of attention, the problem is that there’s a big gap between the talk and the action,” Cukier says. “Yes, progress is being made, but for many people it’s not fast enough.”

Emma Jones*, a first-year student in marketing at Ryerson, is one student who has witnessed and experienced bias at her workplace.

As an employee at The Brick in commission sales, every few months Jones and her colleagues were given the opportunity to meet with the executives of the board. To apply, workers had to inform a manager of their interest and from then, votes would be casted as to who deserved the position. The chosen sales associate would then express ideas and improvements that could be made at work.

“There was one sales associate who was female,” Jones said. “She was very good at her job, very organized, she had lots of creative ideas. We had one manager, and he only let the male sales associates apply for the position.”

This coworker confided in Jones and together, they went to a different manager to tell her what had happened.

“They did a big investigation into it and they found that it wasn’t fair because she expressed her interest in the position and she never got to be put into the vote,” Jones said.

A re-vote was cast and she ended up winning, but the co-worker felt “uncomfortable because she thought that she just got it because of the whole discrimination.” 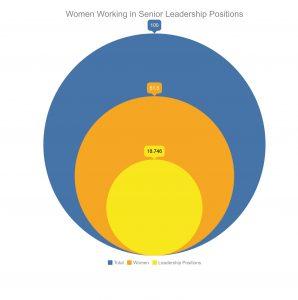 Gender Representation in Leadership Positions- Based out of 100. Data courtesy of the Diversity Institute

“She was the one female associate who did want to do it, and she just wasn’t given the chance. He just told her ‘no,’” Jones said.

The same manager was known for handing customers over to male employees as opposed to female ones. When he interviewed Jones in the hiring process, she discovered that she had to write a math test, whereas the other male who was interviewed along with her did not.

The manager in question had to take a day course on diversity in the workplace.

“No doubt that’s partially the result of the increased attention that is being placed on this issue,” Cukier says, “the increased advocacy work of groups, the leadership of companies that signed up for the 30 per cent club—committing to having 30 per cent of their boards be women in the next few years.”

Women Get on Board is an advocacy group that assists women to sit on corporate boards through workshops and panels in which strategies on how to sit on a board are explored. Deborah Rosati, co-founder and CEO, is not surprised that women are not largely represented on corporate boards. 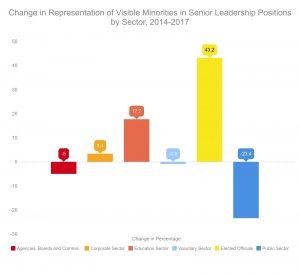 Data courtesy of the Diversity Institute

She suggests that women need alliances with both men and women in order to rise to corporate boards.

“You have to put yourself out as an individual, what’s your value? Demonstrate your experiences, know you have to bring value to the corporate board,” she said.

“What are the steps you need to take today to get you there in the future?”

She said that boardrooms should be questioning themselves on diversity each and every year and that diversity is not just limited to men and women—race is a factor as well.

The study also found that the representation of women who were visible minorities in leadership positions for the corporate sector was 7.2 per cent—once again the lowest of all the other sectors.

“One of the most horrifying results of the research was that in a city like Toronto where half the population is racialized, for every racialized woman on a corporate board there are 16 or 17 white women,” Cukier said.

She says that even in the other sectors, white women outnumber racialized women seven to one.

“You’ll often go to meetings on women in leadership and it’s a sea of blondes,” she said. “If you don’t consider the other groups and intersections, you just replace one kind of injustice with another.”

*Name has been changed for anonymity