Members of Toronto’s Indigenous communities gathered in Ryerson University’s Kerr Hall gymnasium on March 3 to stand in solidarity and raise funds for the youth of Nibinamik First Nation. Funds from the event went directly to programming for Nibinamak youth, whose community had recently gone through a youth suicide crisis.

The event, called “Finding Our Power Together” was named after a documentary filmed by Nibinamak youth which was screened as part of the event’s program. Attendants paid $20 or a donation to enter. The night kicked off with a silent auction, featuring paintings, food, clothing and jewelry sold by Indigenous entrepreneurs.

Before performances took place, Deputy Grand Chief Anna Better Ahneepineskum, of the Nishnawbe Aski Nation, spoke to the audience of about 100 people about the context of the evening, and ongoing challenges faced by Indigenous youth, especially those in rural communities. Ahneepineskum explained how government programming and resources were inadequate, leading Indigenous families and youth into crisis situations.

In order to receive an adequate level of education or to pursue secondary and post-secondary education, many Indigenous youth are pressured to move away from their communities and families.

“Many times our people are referred to as resilient, and that’s a good word but I want you to consider why we always have to be so resilient when we live in of the richest nations,” said Ahneepineskum. 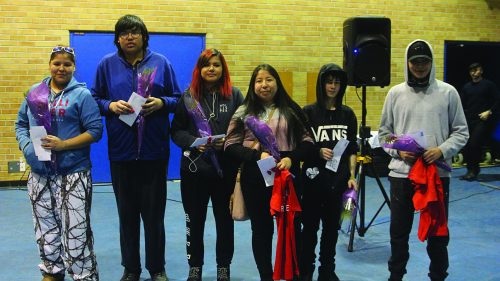 Young members of the Nibinamik community travelled to Toronto for the charity event. Their documentary, Finding Our Power Together, was screened.

Members of the Nibinamik youth empowerment council also spoke at the event. The council was formed after the community went through a series of youth suicides in the past year. Natasha Sugarhead, the council’s first female lead counselor spoke about her own experiences, struggling with education and the increasing rate of suicide in her community, including the deaths of her three brothers. Sugarhead said she faced abuse, depression and racism when she moved to Thunder Bay to pursue a high school education.

“It’s scary to say you’re not safe when police are supposed to serve and protect, for us it’s often the reverse if that,” said Sugarhead, speaking on her experience with Thunder Bay police as an adolescent.

Sugarhead says that the main goal of the funding aspect of the night was to improve youth programming and services in the Nibinamik community.

“What I want to see for the youth is that there is hope—the reason I overcame those challenges in life is because I found hope in singing, I found hope in drawing,” she said to the emotional crowd. “If we can do this, I know other communities can too.”

The documentary, “Finding Our Power Together,” was filmed and produced by Nibinamik youth. It featured scenes of youth counselors Sugarhead and Isabel Sofea discussing the crisis with youth suicide in their communities, interrupted by footage of Nibinamik overlayed with facts about the community.

Nibinamik in a rural community in northern Ontario, about 500 km from Thunder Bay and 80 per cent of the community’s population is youth. 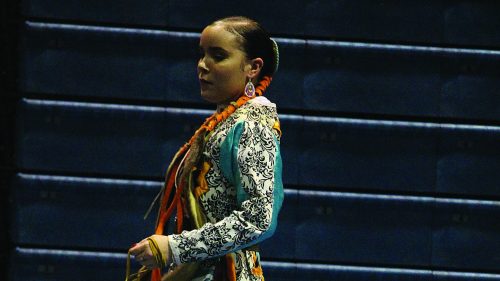 Ineese-nash says the aim of the night was to show Nibinamik youth that they weren’t alone with the problems they were facing and that there was a whole community ready to help them.

“When someone commits suicide in the Indigenous community it impacts all of us and I think it impacts every Canadian whether or not they realize it,” said Ineese-nash. “So I think allowing [Nibinamik youth] to share their voice and allowing them to hear other people are having similar experiences here I think really creates bonds that allow people to understand that.”

“I don’t think the work is over yet, there’s still more to do and I’m not celebrating too quickly but I think in terms of the youth we’ve invited today, they really feel valued.”