Students and staff are struggling with Ryerson’s new financial and security changes in response to recent computer thefts in the Rogers Communications Centre (RCC).

In a statement to The Eyeopener, campus security reported eight thefts at the RCC this year, including two computer towers, a desktop and keyboard.

Faculty of Communication and Design (FCAD) director of operations Dan Greenwood said it cost $4,906 to replace the stolen equipment.

Janice Neil, Chair of the Ryerson School of Journalism, said the money for this would come out of the journalism school budget.

The other six thefts were of personal property including clothing, shoes and books stolen from lockers in the RCC basement, campus security wrote. The total combined value of this is $7,700.

Security has identified a person of interest that has been shared with Toronto Police Service (TPS). While no suspects have been apprehended, Tanya Poppleton, manager of Ryerson’s security operations said TPS is working with Ryerson security on the investigation. Security has also provided TPS with video camera footage. Poppleton added the team will continue conducting more patrols in the RCC area.

Currently, six officers in uniform, a dispatcher and a supervisor are responsible for all 32 buildings at Ryerson University, including College Park and the Mattamy Athletics Center. Each officer has specific zones they’re assigned and patrol and they respond to emergency calls as they come in. Depending on the emergency, one call could require all six officers at one time.

After two computers were reported stolen between the hours of 6 p.m. and midnight on Feb. 5 and Feb. 14, Ryerson implemented new security changes.

In response to the thefts, the doors to the hallways that lead to rooms 213-219, as well as various other classrooms in the RCC will now be locked 24/7. Both days and nights, any Ryerson student can access these classrooms using their student ID, which campus security hopes will restrict equipment access solely to students. RCC editing suites, which feature recording studios and computers loaded with full Creative Cloud and Adobe Suite packages, will now be locked unless they are being used. Tech staff have key access to all of the rooms and arrive at Ryerson at 8:30 each morning to let students in.

Some students are not adjusting well to the new system. Valerie Dittrich, a second-year journalism student who said she consistently uses the suites for a quiet recording space, said that in light of these new rules, she’s had to consider buying the full Adobe suite package and finding a new place to study. 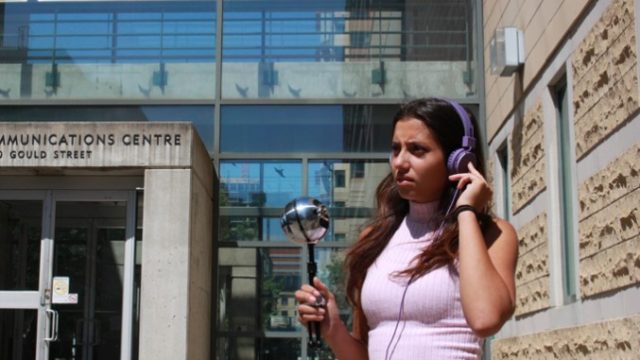 Sometimes needing to use the editing suite up to four times a day, Dittrich said she was on a constant search for staff to let her in. She described  her new school project routine as both “annoying” and “inconvenient for all parties.”

“I could tell [staff] were getting annoyed with me after a while because there was this girl that would keep coming up to [them] asking [them] to open the door,” said Dittrich. “The door locks behind you so it’s not like I could go back in after I left.”

The space, she said, is important to a lot of students, some of whom could not afford to finish their assignments without the use of the school’s equipment. A full Adobe suite package could cost upwards of $100 per month, and while Dittrich said she is considering it, she’s concerned about what that would do to her financially.

“It’s a little bit limiting and a little restricting for students if they really need to work somewhere and there are so many limitations just for them to do a school project,” she said.

In 2016, editors at The Eye took $3,200 worth of technology from RCC classrooms following a string of thefts. The editors were testing newly-implemented security measures including an alarm system to keep doors from staying open too long.

Despite this year’s changes, Poppleton said the thefts were unsurprising, adding that between 32 buildings and six officers, there is a lot of activity, construction, and people walking around. “There’s a lot of staff and students that move equipment,” she said.

While the new security policies have left some students at unease, according to Neil, “it’s just a matter of developing new habits, which we all have to do.”

Disclosure: Valerie Dittrich has contributed to The Eyeopener before.