By Raneem Alozzi and Emma Sandri

About 25 people gathered on Gould Street to protest the White Privilege Conference Global (WPC Global) held at Ryerson University on May 12.

The Stop Racism Rally, which first saw callout tweets earlier this month, protested against the WPC, alleging it was racist against white people, promoted hate and aimed to indoctrinate young students through its workshops.

The crowd slowly began gathering around 11 a.m. in front of the Student Learning Centre (SLC) and then marched towards the George Vari Engineering and Computing Centre, where the conference was being held.

Some protesters were seen sporting jackets with “Soldiers of Odin” emblems on the back, while one wore a shirt with the Confederate flag. Protesters chanted “Shame! Shame on you Ryerson!” as they made their way down the road.

Speakers and attendees of the rally included Ronny Cameron, an activist and social commentator, David Menzies, a reporter for the Rebel Media and Faith Goldy, a right-wing writer and commentator.

“Now in Canada, in 2018, we are seeing the beginning of the normalization of the demonization of the white race,” said one of the speakers, who only identified as Laura.

“[White privilege] has become a catchphrase and is annoyingly regurgitated… Should you think you’re going to racially target students in schools without repercussions, then you have something else coming. We are onto you and we are watching,” she continued to cheers from the crowd.

It was pretty shocking. The first person showed up with a Confederate flag over his head and that’s not something you see in Canada typically

Several passersby stopped to express their disapproval of the protest, calling it “racist” and the participants “Nazis.”

Science Rendezvous, an annual outdoor science fair that attracted young children, was also running on Gould and Victoria streets. Catherine Crawford-Brown, one of the volunteers at the fair, said the rally felt inappropriate during a public event that lots of kids were attending.

“It was pretty shocking. The first person showed up with a Confederate flag over his head and that’s not something you see in Canada typically,” she said. Crawford-Brown and her volunteer team had to relocate their booth table because it included a Canadian flag exhibit— something they did not want the protesters using as a platform for their agenda.

Ayesha Hammad, a third-year biomedical science student, was also on campus at the time and was frustrated by the protest. She says that certain groups of people don’t understand what racism and discrimination are because they can never experience it.

“It’s nothing compared to what people of colour experience and yet they will still find a way to be victimized,” she said, adding that the problem can’t be addressed unless people recognize it.

Hammad also expressed his distaste for the timing of the protest, referring to the families and children on campus. 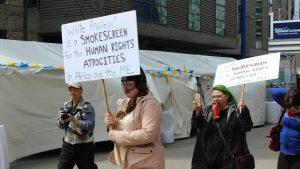 Nearly two hours after the rally began, protesters packed away their signs and left campus.

The WPC, which took place May 9-12, is the first conference of its kind in Canada. The event, however, has been held in the United States since 1999. Its purpose is to provide a safe platform for informed discussion surrounding racial issues and other forms of societal discrimination and oppression.

Taryn De Ruyter, a volunteer at the WPC, said helping make the conference successful was important because she supports the need to explore perspectives on white privilege and oppression.

“This conference provided a platform where real, solutions-focused discussions and education opportunities could take place in an inclusive space,” she said. “It’s unfortunate that others would not see the benefit of engaging in such critical topics that continue to impact our world today.”

“The conference looks at the ways we all experience some form of privilege, and how we’re all affected by that privilege,” wrote Dayo Kefentse, director of communication for the Office of the Vice President, Equity and Community Inclusion at Ryerson, in an email to The Eye.

The speakers at the conference included racial and anti-oppression activists such as Desmond Cole and Adrien K. Wing, among others. This year’s WPC offered a keynote address by Cole and John Powell, the executive director and chancellor’s chair of the Haas Institute for a Fair and Inclusive Society.

In a program guide for the event, the WPC defines white privilege as “a socio-political system that distributes power, privilege and benefits unequally among groups in societies and countries in our world.”

…White people primarily, don’t understand and have very little awareness of the role that they play in disadvantaging people of colour

Both the conference and concept of white privilege have been ridiculed online.

An attendee at WPC, who preferred to be identified as Kendra F., 34, said the controversy surrounding the conference made all the more topical.

“I think that the discomfort and the protests… really speak to the fact that people, white people primarily, don’t understand and have very little awareness of the role that they play in disadvantaging people of colour,” said Kendra.

One user responded to a post Ryerson made about the conference’s Indigenous Walking Tours, which took attendees around campus to discuss Indigenous history, by comparing white privilege to fictitious leprechauns and goblins.

In response to the criticism levied at Ryerson for hosting the WPC, Kefentse said, “One of the most valuable attributes of a university is that controversial subjects are discussed publicly, attitudes are challenged and alternatives are suggested and considered.”

A previous version of this story incorrectly identified Kendra as a WPC volunteer, not an attendee. We regret this error.