Gould and Bond streets reopened after Toronto police concluded that a suspicious package on campus was not a threat.

Just before noon, Insp. Peter Moreira said investigators determined that the package was a “benign personal alarm” and contained a bike lock alarm.

Campus security alerted police after 9:30 a.m. when a package was found in a garbage bin on Bond Street. Police said a Chemical, Biological, Radiological, Nuclear Explosive (CBRNE) team investigated the incident for about three hours.

The previously affected buildings also reopened and classes resumed after they were temporarily cancelled. 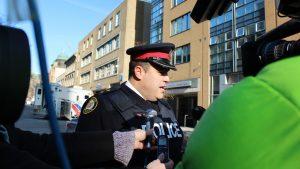 Police had evacuated Gould Street between Dundas and Bond streets. The evacuated buildings were the Ryerson Image Centre, the Student Campus Centre, Oakham House, South Bond building and the Heidelberg Centre for Graphic Communications Management (GCM). Some students were unable to get to classes and exams due to the evacuation. 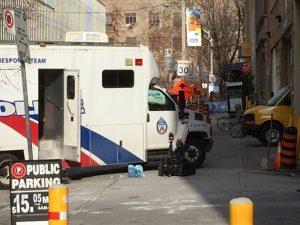 Tony Conte, executive director for Ryerson’s Office of the VP Administration and Operations said students who had classes in the evacuated buildings “can assume their classes are cancelled until further notice.”

Moreira said the evacuation was a precaution and that neither Ryerson or police have received any threats.