The Catalyst is located on the second floor of the Rogers Communications Centre and features lab spaces, meeting rooms and workspaces for scholarly research and creative activities.

While the facility is based in Ryerson’s Faculty of Communication and Design (FCAD), it will bring together researchers from across campus and support interdisciplinary research, according to Greg Elmer, the research centre’s director and a professor in the school of professional communication.

“We have newer researchers who are looking to collaborate with different communities in the city to help solve political and social problems as well,” he said.

Elmer added that the facility is distinct from FCAD’s learning zones.

The project costed approximately $2 million, mostly from the federal government. It was funded by federal infrastructure money the university applied for three years ago. 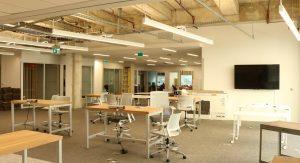 Gauntlett has his own government-funded lab in The Catalyst, which, according to Falzon, is an indication of Ryerson’s commitment to creative innovation.

Falzon said researchers at Ryerson were previously working separately and not creating research that was impactful enough.

Richard Lachmen, the director of the Transmedia Zone and an associate professor in Ryerson’s Radio and Television Arts, is also running a new support lab dubbed the ‘CoLab’ out of the space. The facility will support faculty and graduate student research in launching prototypes or pilot projects.

Lachmen is also running his own experiential media lab out of The Catalyst, which will focus on high impact technologies such as advanced robotics used in interior and set design, virtual reality, data analytics and social media analytics.