Sci-fi enthusiast talks at York University, instead of Ryerson.

Apart from the aliens and parallel universes, radio and television arts graduate Robert J. Sawyer brings political, social and religious ideas to the surface in his novels.

“Any questions?” Robert Sawyer asks the class of York University students at the conclusion of his lecture. Well, of course, there are many.

“Why do you write in the sci-fi style?” queries one excited girl, her smile wide, her adoration obvious. The explanation begins: From day one we’re taught “never judge a book by its cover,” but we do it anyway.

Sawyer’s books are not just aliens and special effects, as some of their covers might suggest. They are all packed with meaning, full of his political, philosophical and scientific insights. But he’s not just trying to convince you — he wants to make you think for yourself as well.

“What science fiction allows us to do is use characters, settings, and situations that are so removed from our day-to-day experience that the preconceptions that go with the debate have to be left behind.”

You thought Star Trek was just geek fantasy? Not so, Sawyer insists.

“Classic Star Trek from the sixties,” he says. “They would talk about the Vietnam War, which was very much going on at the time, when nobody on TV could speak so negatively about the conflict. Because they weren’t actually using the name Vietnam they were able to stand up and say ‘Hey, this is the real issue that’s underneath if all!’ in Vietnam, in racism, in women’s rights, and all the other things they tried to talk about in Star Trek.”

For all of Star Trek’s noble issue-raising, look where we are now: the threat of war looms, the scale of poverty is mind-boggling, the environment seems on the verge of collapse.

Well, Robert J. Sawyer is not so pessimistic. 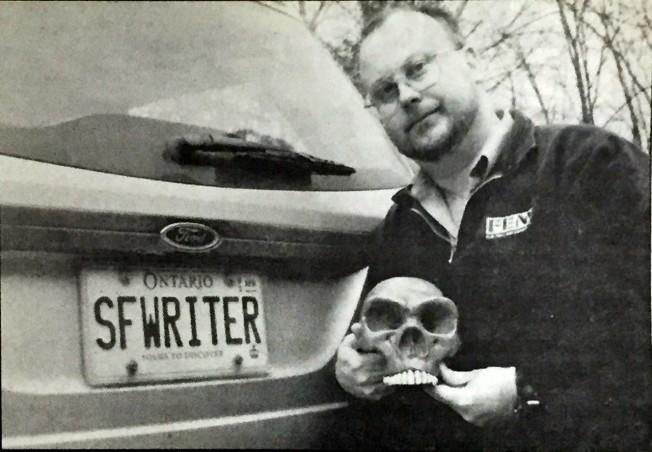 “I have seen, in my four decades of life,” he announces proudly, “enormous changes for the better.

“Today in this classroom there is a complete mixture of ethnic types, when the year I was born you would have not seen that.

“When I was growing up in the seventies there was a lot of belief that we weren’t going to make it out of that last century, that the nuclear Cold War situation with the Soviet Union and with China and others had reached the point of no return, that the generation I was part of would be the last generation of humanity.”

And so, the young Sawyer, aware the Earth might be destroyed at any moment, set out to write of future worlds that would probably only ever exist in the imagination. Denied entry to Ryerson’s esteemed journalism program because of a missing history requirement, he took radio and television arts instead. His very first story was published in 1979 in Ryerson’s own White Wall Review magazine, a few years before he became its editor. He graduated in 1982.

Twelve novels, a short story collection, and a pile of literary and science fiction awards later, Sawyer has come down to Earth a little. His stories still feature galactic gizmos or intelligent dinosaurs in parallel universes, but his hidden meanings are becoming a little less hidden.

“Instead of dancing around the issues, I’m putting them more front and centre. With books like Calculating God, [his latest,] it’s right there in the title what this book is going to be about.

“Look, whatever question you want to ask — You want to ask the biggest question of all: Does God exist? You can solve that intellectually,” he asserts. “Ideal number one is Rationalism. I really, honestly believe that people should use their brains to sort out problems. Probably in this century we will know enough science and have enough tools at our disposal to say ‘Yes, God exists’ or ‘No, God does not.’”

Now, before you dismiss Sawyer as some sort of mad scientist, keep in mind that he researches extensively for his books, and his science is always accurate — as far as we know. He was dissecting cloning in his stories when Dolly was just a big-breasted country singer.

Sawyer and his literary ilk are trying to jumpstart the debate on topics not usually discussed outside of college grounds.

“It’s only on university campuses, in the entire world, that you still find Marxist-Lennist societies, for example. They’re here because people are idealists at your age and they argue about these issues. And then what you find is that after you graduate from university you can’t discuss these issues anymore, because as soon as you say ‘Well, what do you think about abortion?’ to somebody at a party, they walk away.”

Robert Sawyer just published a collection of his best short stories, called Iterations, from Quarry Press. His next novel, Hominids, the first in a three part series, come out in June.