Some of the qualifications include having a “demonstrable record of inspired values-based leadership, creative vision, sophisticated relationship skills, a powerful ability to communicate and proven ability to lead in complex multi-stakeholder environments.” The committee is also looking for someone who is “an authentic listener,” and is “genuine in his/her fit with Ryerson’s culture.”

The Bank of Canada corrected an error on its website describing the mountains on Canada’s new $10 bill in July. The bank was alerted to the error by Ryerson architecture professor Hitesh Doshi last November.

The Bank of Canada’s website previously stated that the mountain range on the new polymer bill depicted Mount Edith Cavell, a part of the Canadian Rockies. However, Doshi, who had visited the peak while on vacation, noticed the image on the bill didn’t match his photos.

The Bank of Canada changed the description of the mountains from Mount Edith Cavell and Mount Marmot to Lectern Peak and Aquila Mountain, and the Palisade and Pyramid mountains were corrected to Mount Zengel.

G. Raymond Chang, Ryerson University’s third chancellor and namesake of the Chang School for Continuing Education, died on July 27 at 65. Chang, a Jamaican-born Chinese-Canadian, was a Bay street juggernaut, prolific philanthropist and a family man. He served as the school’s chancellor from 2006 to 2012.

Chang was awarded the 2014 Order of Canada, one of the country’s highest civilian orders, a month before his death. “Whenever students needed help, Ray was there for them,” said President Sheldon Levy in a news release. “He was always an inspiration, and his passing is a tremendous loss for our university and the many thousands of people whose lives Ray touched in his remarkable time with us.”

Chang is survived by his wife, Donette Chin-Loy, and their two children. 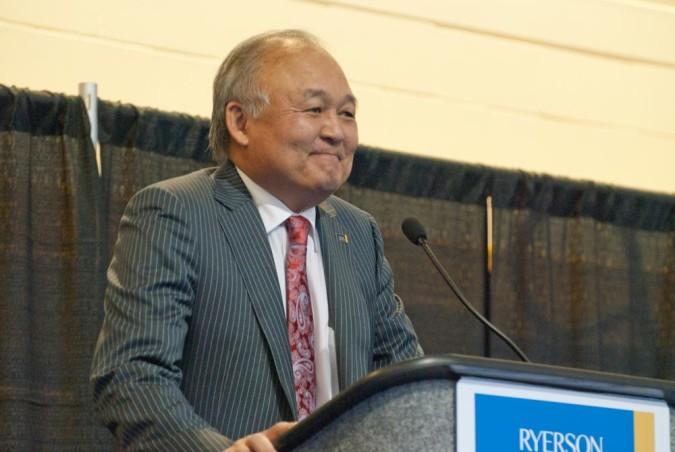 The Sam the Record Man sign has a new permanent home and Ryerson University will be footing the bill for its move-in.

Toronto City Council voted on July 10 to have the sign mounted on top of the Toronto Public Health building, which is owned by the city, at 277 Victoria St. Ryerson will be paying for the re- assembly, mounting and maintenance of the sign.

The school’s original agreement required it to mount the sign at the record store’s original location at the corner of Yonge and Gould streets, now the site of Ryerson’s Student Learning Centre (SLC). The case stirred up controversy when Ryerson began proposing other locations for the sign, saying that mounting it at the SLC might pose safety risks due to the mercury inside the sign’s bulbs, be distracting to students and that it would clash with the SLC’s design.

Former Ryerson journalism professor John McCallum died on July 7 in Toronto. He was 90.

McCallum began his journalism career in London after the end of World War II, where he lied about his age to join the army, according to The Toronto Star. He also worked as a copy editor for Reuters, at the CBC, and various publications in China after UNESCO sent him there in 1982 to improve English journalism at state news agency Xinhua. The Toronto Star said that McCallum “taught many of today’s prominent Canadian journalists” during his time at Ryerson.

McCallum is survived by his son and daughter, their mother and three grandchildren.