The RSU, the Continuing Education Students’ Association of Ryerson (CESAR) and Centre for Women and Trans People (CWTP) organized the fair and after-party, while RSU Vice-President of Equity Pascale Diverlus and members from the CWTP also helped organize the rally and march with Toronto’s International Women’s Day Committee and Women Working with Immigrant Women. According to the International Women’s Day Toronto website, the event displays “solidarity with the World March of Women.”

“[Women are] experiencing the same things that were marching for, so it’s very important that we bring light to them,” said Diverlus.

Before the fair, women’s rights supporters marched from the Ontario Institute for Student Education near St. George subway station to Gould Street. Supporters held signs reading “THE REVOLUTION MUST BE FEMINIZED” while chants demanded rights for child care, abortion, an inquiry into murdered and missing aboriginal women and more.

“I’m here because I work in the downtown-east area and women there are particularly marginalized for their mental health, drug use, sex work and more,” said Aaron Woznica, a 2014 Ryerson social work alumnus and Toronto Harm Reduction Workers’ Union supporter. 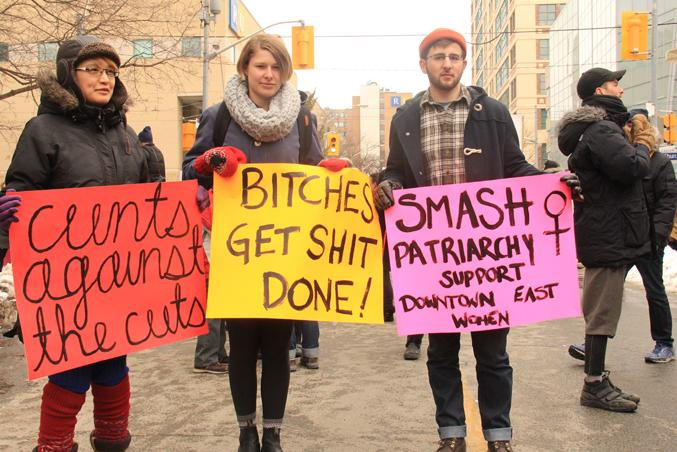 Fair organizers from Ryerson also collaborated with non-activist groups, including Pins and Needles – an all-female band that played the Ram in the Rye – and Red Dragon, a tattoo shop completely employed by women. Jenny Pearson from The Centre for Women and Trans People thought it would draw students and young members of the public to the event.

“There’s definitely an older age group that comes here, but this year, we tried to make it more youthful,” said Pearson. “It’s about getting support of the demolishing of patriarchy,” said Pearson.

Diverlus said although it was important for other movements to be included in the celebration, she said she wants students know their part in advocating for women’s rights.

“Students have always been leading social justice movements,” said Diverlus. “We want them to feel like it’s their movement as well.”