Emotions have been running high on campus since Dec. 1, when the Ryerson Students’ Union (RSU) eliminated its Executive Director of Communications and Outreach (EDCO) position, effectively letting go of two employees.

The two employees were Dina Skvirsky, who occupied the position until Wednesday, and Gilary Massa, who is three months into her maternity leave.

At around 3:45 p.m. on Dec. 1, Massa answered a call from RSU president Andrea Bartlett to hear that she was being laid off.

“It was a very short conversation at which point I reminded her that I was on maternity leave,” Massa said. “[Bartlett] said she understood that but that the students’ union was going through a restructuring process and … my employment had been terminated.”

RSU President Andrea Bartlett said the decision had to be made due to financial constraints on the RSU.

“This was not an easy decision at all for anybody involved,” she said in an interview with The Eyeopener, adding that the changes are being made “in order to better service the students, and put the students’ union’s hands back in the students’ hands.”

Full-time staff at the RSU are unionized, giving them certain rights and protections under a collective agreement. But Massa, who’s been at the RSU for almost seven years, and a representative from the Canadian Union of Public Employees (CUPE) said they haven’t yet decided on how to respond to this abrupt situation.

“I’m still trying to figure out what my next steps are,” Massa added. “At this point I’m more concerned about how I’m going to put food on the table each week and pay my rent.”

Bartlett said that though her team has “been painted with a certain brush that [they] don’t care about the human element of this,” the decision to restructure the union was very difficult to make.

“Individual people were not the reason for why this role was eliminated,” she said. “This was a business decision because of serious financial concerns and serious operational concerns.”

When it came to laying off Massa and Skvirsky, she said, “everything was done in accordance with the Employment Standards’ Act.”

The news inspired an outcry on social media from students who personally know Massa, such as fourth-year journalism student Angelyn Francis, who is part of the RSU Board of Directors as the campus groups director.

“It feels like we [the Board] didn’t have too much say in it to be honest. There’s a lot of things that don’t actually end up coming to the board and are just decided at an exec level,” she said. Francis, who worked with Massa when she was part of the Racialized Students’ Collective, added that she doesn’t think getting rid of the EDCO position was smart or necessary.

“I think they should think a bit harder the implications of the things they’re trying to do because the things they are trying to do is massively restructure the organization,” she said. “Honestly we’re students about to go out in a  precarious job market as it is so how the hell are you firing someone who supports a family, who’s on maternity leave and with no real reason?”

Vice-president education Cormac McGee said that though the executives look bad right now, “this decision helps the future of the organization.”

The RSU said as much in a letter released on Dec. 3, explaining to its membership that the change was for long-term financial stability. The letter was addressed from all RSU Board members, but Francis says it shouldn’t have been.

“It kind of caught me off-guard, personally,” she said. “It’s a misrepresentation to say that this is what the entire board is saying.” During the Nov. 17 Board meeting, she recalls, Bartlett told members certain recommendations and changes to the structure of the RSU would be considered and didn’t clarify how they would be implemented.

The restructuring responsible for the action began on Oct. 20, when the RSU put up a job posting for a new General Manager on their site. On Nov. 17, while the application process was ongoing, The Eyeopener reported that the roles of the GM might conflict with the collective agreements of RSU full-time staff.

Patrick Legay of CUPE local 1281 said at the time that the union had voiced its concerns to the RSU and was hoping for a constructive discussion that would change or clarify the roles of the GM.

About a week later, the RSU announced that Natasha Campagna had filled the post.

Fourth-year student Tari Ngangura, who is an executive of the United Black Students at Ryerson group and friends with Massa, says the position is useless.

“[The RSU] is not a company, it’s a students’ union. This is basically an NGO (Non-Governmental Organization). You’re not meant to profit off of that,” she said. “A general manager — what are you managing? What Gilary [Massa] did was basically overseeing, so you don’t need a general manager.”

Ngangura added that there is an apparent conflict of interest in hiring Campagna, who has a total of three-and-a-half years of experience in the Ryerson Commerce Society (RCS). Bartlett was involved in the RCS for two years.

“She used to be on the RCS Board a couple of years ago at the same time that Andrea was on it so they know each other,” Ngangura said.

Though Bartlett and Campagna never served on the RCS executive team together, Campagna oversaw the administrations of the RCS as coordinator of student engagement and business development (a position paid for by the university) while Bartlett was executive vice-president of the RCS in 2013-14.

Bartlett denies that there was any conflict of interest, saying the rigorous application process and the fact that Campagna was the most qualified person for the job — as well as the only applicant from Ryerson — made her the best candidate.

“Let’s be honest and say that you just wanted your friend in here,” she said. Diverlus, who worked closely with Massa when she was part of the RSU, has been vocal about her disagreement with the RSU on this decision.

“My heart has been breaking for the fact that someone just lost their job. Gilary, when I was VP equity, was my support system,” Diverlus said in an interview with The Eyeopener on Thursday.

“My year was hard. And Gilary was really there for me. There were days, and even there are days now, when I’m literally terrified to come to campus, especially when I was elected, and she walked me home, she let me go to her house, and she fed me days when I couldn’t afford to eat.” 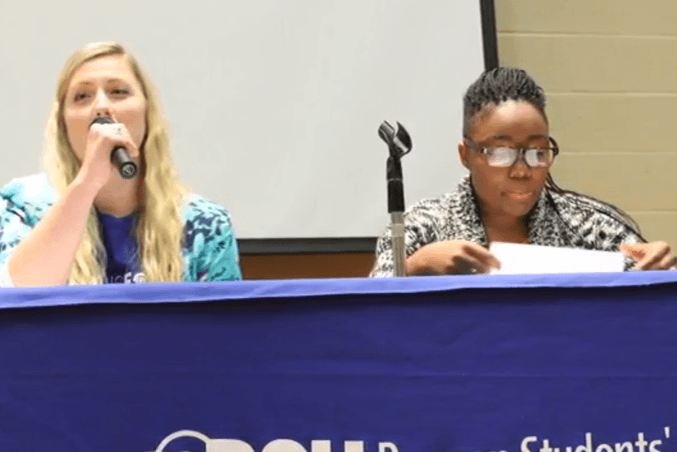 On Dec. 2, Diverlus walked into Bartlett’s office to demand answers about why Massa had lost her job. According to Bartlett, Diverlus barged in without an appointment and when asked to leave, she stayed to criticize the president.

“You should really think about people’s lives before you try to ruin them,” Diverlus said to Bartlett, as can be heard in the background of a video Diverlus took of the interaction.

“I literally said three sentences, she did not respond and I walked out. That’s all that happened,” Diverlus said afterwards. “That entire video is everything — all 40 seconds.”

Before the video was posted, vice-presidence operations Obaid Ullah posted on Facebook that Diverlus has walked in to yell and harrass Bartlett — which Diverlus says the video shows she didn’t do, but instead stayed calm and left quietly. Bartlett says the video is disingenuous given the fact that her voice can’t be heard.

“You can’t see the body language,” she added. “Walking into someone’s office without any notice … in order to make accusations that are difficult for anyone to hear is not appropriate. We don’t see eye-to-eye … [and] I empathize that she may have personal relationships with the people that are affected by this.”

Another change in the RSU is the proposed creation of a new executive of communications and outreach. The motion to approve such a position was supposed to be brought forward at the Semi-Annual General Meeting on Nov. 30, but quorum was lost before it could be discussed.

“The moment I saw that I thought you’re literally just trying to get rid of the executive directors, aren’t you?” Francis said.

But the position was not brought forward by RSU executives, but proposed by a student. “That decision wasn’t related to any of these restructuring changes. Currently no executive oversees [those roles],” Bartlett said in response to the (now eliminated) director and vice-president roles sharing the title of communications and outreach. “[Currently] those roles are split on an executive level between Cormac and myself.”

The full statement released by the RSU on this situation can be read here.