Looking at him now, that might be hard to believe.

Munro, the coordinator of Ryerson’s Veterans Transition to Education program, served as the university’s flag bearer for the 2017 Invictus Games, and now it seems like the 53-year-old’s life couldn’t get any better.

After dropping out of high school after Grade 9 and enlisting in the Canadian Armed Forces at the age of 17, Munro shipped out to Cyprus on a peacekeeping mission in the 1980s before leaving the forces due to a placement issue.

When he came home, Munro felt lost; the veteran found himself petrified at the thought of starting a new chapter in his life.

His situation worsened after a divorce, after which he sought help from a psychiatrist for depression. For years, Munro struggled to cope, and he isolated himself from as many people as he could.

Munro wanted to change. When he joined the army, he gave up his chance to pursue an education. At 47, he wanted that opportunity back.

At his first class, he was nervous to say the least.

“I remember introducing myself by saying, ‘Hello, my name is Chris Munro and I’m fucking terrified,’” he said. “And believe it or not, that was probably the best thing I could’ve said, because after that, I felt a tremendous amount of relief.”

Everyone started laughing, because, deep down, they were all thinking the exact same thing.

“It was honestly one of the best moments of my life,” Munro recalls. “Knowing that those people felt the same way I did drew me closer to those people.”

Munro found his awakening, and a spark was lit. In a span of six years, Spanning the Gaps helped Munro get to the point where he could qualify as a post-secondary student. Since then, he’s earned a bachelor’s degree from Ryerson in social work and is now pursuing his master’s in the same field.

“I remember introducing myself by saying, ‘Hello, my name is Chris Munro and I’m fucking terrified’”

He’s made sure to give back to the program that helped him. With his military experience, Munro earned the chance to serve as a coordinator to Ryerson’s veteran transition program, a subdivision of Spanning the Gaps that helps veterans jumpstart their careers through academic engagement.

During his first year, Munro already took on a leadership role in the program, and it didn’t take long for him to click with the students he assisted in one-on-one sessions.

“I had an amazing time as a tutor, and now when I walk through campus I constantly see students that I used to help out,” he said happily. “I’m not going to lie, it feels great.”

Even though his role has changed from a tutor to a coordinator, Munro still enjoys every moment he has with the students—connecting with them both inside and outside of school.

“At first, there were only three people would show up. But now, we get about 5 to 10 members per get together and we sit down and talk about stuff.”

With the Invictus Games, an international sports event for  veterans who were injured during their service, Munro has another chance to help veterans who’ve gone through similar struggles as him. The annual adaptive competition aims to promote sport as a means of rehabilitation for those who are wounded as a result of service. 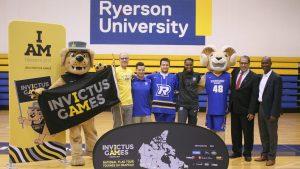 With the Invictus Games now in Toronto from Sept. 23 to 30, Ryerson’s Chang School will have the chance to connect more veterans to their resources and programs.

Along with career advising sessions, Marie Bountrogianni, the dean of the Chang School will be moderating a panel for veterans on Sept. 29 at Sheraton Centre Hotel.

“The highest concentration of military bases and reserves in Canada lie from London to Ottawa,” said Munro. “So we have a huge population that are underserved when they get back home, so it’s great to see establishments like Ryerson giving a helping hand.”

When Munro shifted his life by joining Spanning the Gaps, he also decided to pursue ways to stay physically involved.

“I think that it’s vital for these athletes to continue to stay fit and get away from some of the issues that they face every day,” says Munro, who now teaches Shotokan Karate classes. “It’s definitely helped me grow each and every day.”

Munro used to be a hockey fanatic, a sport he fell in love with through a connection he had with his dad. But after his relationship with his family went sour, his passion for the sport disappeared.

“I’m just a regular guy with goals just like everyone else. In life, you have all of these ups and downs and you just never know when things are going to go well for you… and being a part of these (Invictus) games has just been another bright spot that’s come to light for me.”

Having a leader like Munro to represent the games has been positive for the members of the event. Greg Danko, a coordinator for the Invictus Games flag tour, didn’t mince words on how important it was for people like Munro to be involved in the event.

“I can’t express how it important it is for Chris to be a part of this event,” said Danko. “Having somebody that can relate to these veterans is always good for us and good for the people.”