Ryerson administration says the university is making “a conscious effort” to rework the garbage bin systems across campus to achieve zero waste, but the school still has a long way to go.

“We cannot give you a definite answer of when we’ll be [zero waste] but I think we’re marching ahead in that direction,” said Saher Fazilat, assistant vice-president of facilities management and development at Ryerson.

Zero waste doesn’t really mean no waste. It means at least 90 per cent of what goes into an institution’s waste streams is diverted from landfills through recycling and compost.

Carleton University announced that their food court achieved zero waste at the end of January 2018, several months after Carleton’s residence dining operations did the same.

Ryerson Eats, which includes the Hub Café, Pitman dining hall and the International Living & Learning Centre dining hall, still has a ways to go until the university-run kitchens can call themselves zero waste, let alone the entire campus.

“There are some organic bins that actually go in the kitchen and we’ve started putting some in the libraries. And we want to take it further,” Fazilat said.

Bins with separate slots for recyclables, mixed paper, waste to landfill (or garbage) and organics can be found in the Hub Café and the library. 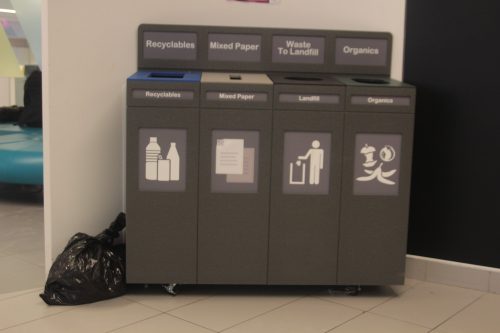 A four-stream waste bin in the Hub Café at Ryerson. Photo: Kosalan Kathiramalanathan

Fazilat said Ryerson plans to expand this four-stream system to more buildings over the next two years. Different bins across campus pose a challenge to becoming zero waste, she added.

Depending on what building you’re in at Ryerson, there could be no compost bins, organics bins or bins in Jorgenson Hall, which use worms to compost chopped food scraps. This is known as vermicomposting.

In coming up with a zero-waste strategy, Voula Cocolakis, executive director of university business services, said it’s important that Ryerson takes the entire university into account.

“We want to make sure we have an approach that’s uniform across campus, and right now we don’t,” said Cocolakis. “We operate in some buildings, in other buildings, we’re not the operators, we’re the tenant.”

She visited Carleton in November and said their food court bins are “beautifully-marked and communicated so you can’t make a mistake,” adding misplacing things into bins is often a problem.

“We still have a lot of measurements to do in terms of measuring where we’re at and what we need to put in place, but again, it can’t just be a food services initiative, it’s got to be a campus-wide initiative,” she said.

But staff aren’t the only community members brainstorming ways Ryerson can lighten its garbage load.

Microbe Hub is a student-led initiative run by volunteers who collect Jorgenson Hall compost bins, and put them in worm bins. Tess Van Den Bosch, a Microbe Hub volunteer, said the “dream goal” is expanding their initiative across campus.

“I think we all want to live in a clean and healthy city and responsible waste diversion is a huge part of that,” she said.

Van Den Bosch said the way waste management works on campus now, with different bins in different buildings, can get confusing and it gets even more confusing because the vermicomposting bins can’t take the same scraps the Hub Café and library compost bins can.

“I think Ryerson is up against a lot in terms of trying to attract students to recycle and divert waste,” she said.

“It’s a really complex problem, but that’s why student-led initiatives are so vital,” she said. “Something like Microbe Hub has the capacity to really engage the entire body of the university in trying to work towards zero waste.”

Students are the most important stakeholder to consult when trying to come up with a zero-waste plan since they’re the ones who’ll be using the systems put in place, according to Heather Varner, special programs manager of MASS Environmental Services Inc., the solid waste consultant company Carleton hired.

Varner said a university that wants to achieve zero waste needs to connect with all their stakeholders, like students and the city, and should also start with a waste audit.

For a 24-hour period, MASS Environmental Services Inc. will monitor all the waste being produced on site to find out where waste is generated, what materials are being recycled correctly, what’s being contaminated, where garbage is misplaced and where recycling is being sent to landfills when it shouldn’t.

“Our slogan is, ‘If you don’t measure it, you can’t manage it,’” said Varner. “I truly believe that.”

Once the waste is measured, she said they can pinpoint ways to improve.

While unsure when Ryerson will achieve zero waste, the new vice-president, administration and operations, Deborah Brown, said there’s a definite commitment from Ryerson to divert waste.

“I think a demonstration of that commitment is Voula [Cocolakis] going to Carleton and taking a look at what they’re doing,” she said.

“It’s something we can learn from Carleton.”