When it comes to rosters, there aren’t many teams at Ryerson who are as stacked as the Rams men’s basketball team.

Sometimes in sports, players aren’t willing to sacrifice minutes for the greater good of the team. But that hasn’t been the case for third-year forward Warsame Mohamed, whose patience looks like it’ll finally pay off as he’s headed for a big role going into the 2018-19 season.

Before coming to Ryerson, Mohamed was named “player of the year” at A.Y. Jackson Secondary School and had numerous universities approach him with offers. After his senior year in 2015, The University of Prince Edward Island (UPEI) stood out significantly to Mohamed, because of the amount of money they were offering. One of his closest friends at the time also decided to commit with him.

But after thinking about his situation, he’d end up making a last minute decision that would change the next four years of his life. “I wanted to go [to UPEI] but I’m the oldest in my family,” Mohamed said. “I wanted to also stay home and take care of my siblings and my mom.”

Weighing out his options, Mohamed was in a dilemma. Staying home won him over and made it his number one priority. With his mind set, he would talk to Rams head coach Roy Rana, who welcomed him with open arms.

The team he was joining already had a lot of talent, with solid players in Juwon Grannum and Adam Voll taking up most of the minutes at the forward position.
Mohamed knew that his minutes would be scarce in his first two years, but instead of complaining, he leaned on the experienced players on the roster to help develop his game.

“I know a lot of my friends who aren’t patient and I see where it takes them,” he said. “I know how to wait for my turn, but I also know I gotta get better every day no matter what, you never know when the opportunity will come.” 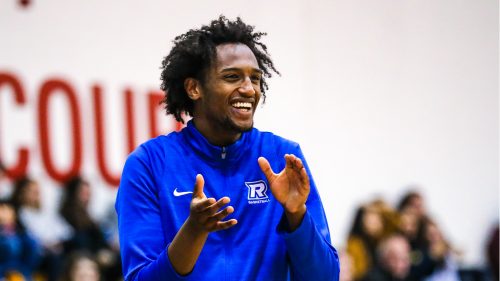 Whether it’s on the court or off the bench, Mohamed projects a can do attitude. Photo: Alex D’Addese

Whether it was developing a strong mentality from Voll or learning how to become a better communicator from Grannum, Mohamed made sure to acquire as many attributues from them to learn new techniques and take his game to the next level

Spending the majority of his summer working on his physical and mental strength, Mohamed believes that this was his best off-season to date. His play during the preseason has already opened the eyes of many teammates, showing off his potential by making the most of his minutes on the court.

In July against China’s men’s national team, Mohamed scored 14 points on six of eight shots in 17 minutes. He continued his solid play in the team’s biggest game of the pre-season, scoring eight points while adding six rebounds in 15 minutes against the National Collegiate Athletic Association’s (NCAA) Duke Blue Devils.

Most recently, Ryerson travelled to British Columbia to participate in the Guy Vetrie Memorial Tournament hosted by the University of Victoria. The 6-foot-8 inch forward continued to play well, adding 13 points and six rebounds in 14 minutes off the bench.

“He’s gonna be under the microscope this year,” Rams star forward Jean-Victor Mukama said. “Rana’s expecting big things from him… I think he’s gonna shock a lot of people.”

Rams lead assistant coach Borko Popic expects the big man to be very aggressive this season, while also making his mark as one of the more vocal leaders on the team.

This year, Mohamed is expected to partake in calling out ball screens and off-ball actions on the defensive end, while hoping he can continue to be efficient in the low post area with his soft touch around the rim.

In his last two seasons, Mohamed has led the team in field goal percentage, knocking down an average of 61.8 per cent of his shots. He did this, despite ranking just 182nd in the OUA in minutes played last season, Given these eye-popping stats, Popic is excited with what Mohamed will be able to provide them this season.

“He has a skill set around the basket with his touch, passing ability that’s pretty unique,” Popic said. “We’re gonna look to utilize that as much as we can.”
“For Warsame [Mohamed], it’s all about staying ready and taking every opportunity given to him and maximizing it to the fullest,” Popic said. “Self-accolades don’t mean much to him, and his only goal is to figure out ways to help this team become successful.”

Entering his third year at Ryerson, Mohamed has the potential to make waves for his team this season and the patience he’s showcased over the years will all be worth it.