At the same time that organizations prioritize their dependence and use of technology, cyber threats and risks are becoming more sophisticated and harder to combat. This is happening at an alarming rate, a study by Deloitte, a brand of financial service firms, and Toronto Finance International, found.

The research is based on interviews with more than 40 Canadian cybersecurity leaders and educators as well as in-depth surveys of more than 110 Canadian executives. According to the research, the demand for cyber talent is increasing by 7 per cent annually. From 2016 to 2021, there are 8,000 roles that need to be filled and not enough experts to close the gap.

“No matter if you’re in fashion retail or if you’re an Apple organization; technology in any instance is the heart of any organization,” said Marc MacKinnon, the leader of Deloitte Canada’s cyber strategy practice and an author of the study published in July 2018. Organizations need to understand how to protect their brand or business against cyber risks, MacKinnon said.

About 24,000 incidents of cybercrime were reported to police in 2016, according to Stats Canada. For every 100,000 people in Ontario, there was a police-reported cybercrime. Value of online personal data increased space to attack, and regulation for security and privacy are drivers of cyber risk in the report.

“Because there’s such a gap to fill, [organizations] are going to have to make do with what does exist but also put some kind of good training and element programs in place,” said MacKinnon.

The report suggested that organizations update their idea of an ideal cybersecurity hire from traditional skills to seven personas of capabilities that can be updated as the industry changes.

“There needs to be some kind of education and awareness across all sectors, that there’s this new profession,” said MacKinnon.

The report lists: “strategist”, “defender”, “hacker”, “sleuth”, “advisor”, “firefighter” and “scientist.” These personas represent the skills organizations may ask of graduates to search for new talent. MacKinnon emphasized the need for advisors, strategists and scientists.

A lack of graduates with job-ready skills is one of the recruitment challenges listed in the report. 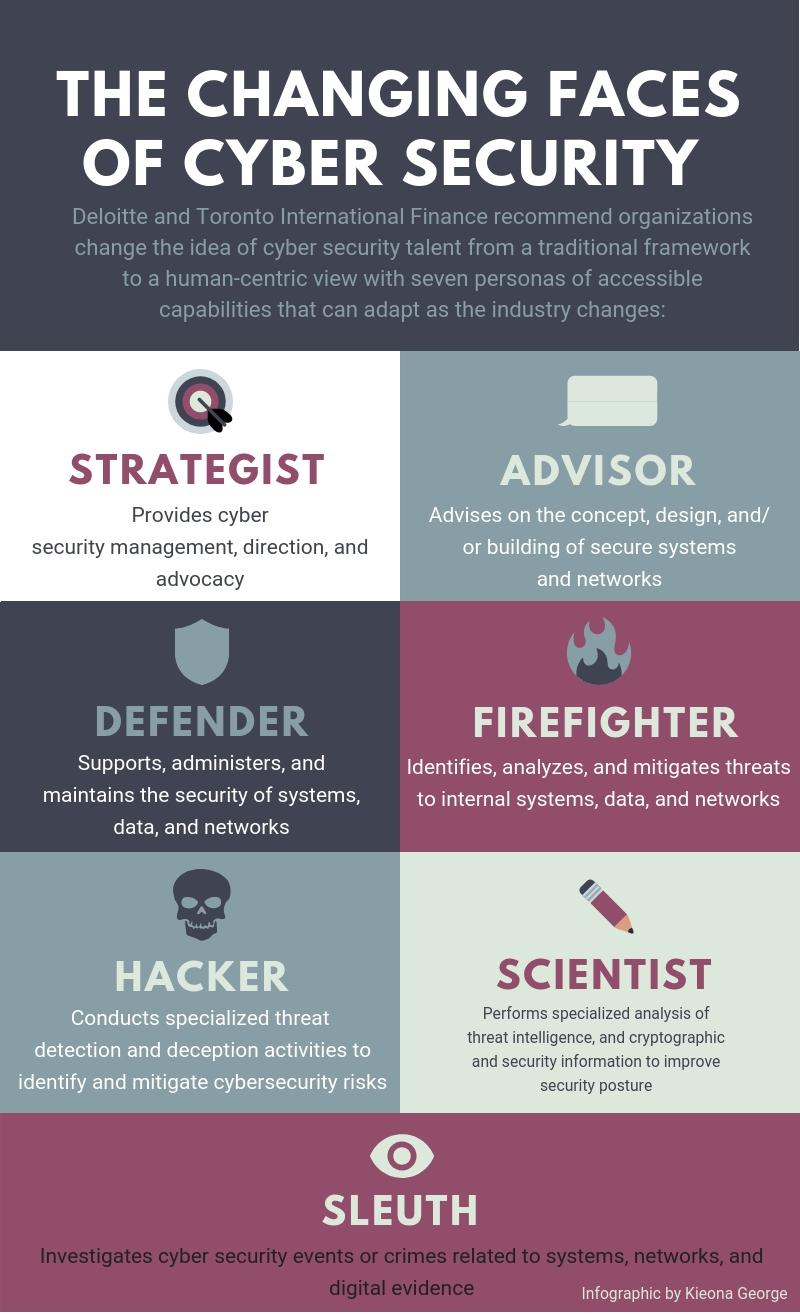 Preparing for cybersecurity at Ryerson

Ryerson has a computer security and digital forensics certificate program in the Chang School of Continuing Education. In partnership with Sheridan College, Ryerson planned to build Cybersecurity Catalyst, a national cybersecurity center at a new Brampton campus before funding was stopped by the Ontario government.

Merrilee Fullerton, the minister of training, colleges and universities stated in a press release that Ontario faces a $15-billion deficit and as a result, the government can no longer fund certain projects which include Ryerson’s Brampton campus.

There are no current undergraduate or degree programs at Ryerson that is specifically for cybersecurity. It’s difficult for professors to keep the curriculum up to date with the fast-changing industry.

MacKinnon describes it as a push and pull situation.

“Academia needs to pull more from private industry either through joint partnerships, internships and co-ops,” said MacKinnon. “I think private sectors need to push themselves into the academia to make sure that this is happening as well.”

Gender disparity in the cybersecurity sector

The inclusion of more females is recommended in cybersecurity as only 29 per cent of Canadian cybersecurity employees are female. It’s higher than the global average of 11 per cent, according to a report by the Centre for Cyber Security and Education and the non-profit International Information System Security Certification Consortium (ISC)².

Georgiana Dogaru, a second-year business technology management student at Ryerson, is working towards inclusion as director of campus involvement for the Women in Information Technology Management (WITM).

“I can pick out the number of girls that would be in my class. Like on my two hands, there’s not that many,” said Dogaru. “And I’m guessing that it’s the same in the workplace for this industry.”

For every 100,000 people in Ontario, there was a police-reported cybercrime

WITM strives to change the imbalance of gender with their mandate to encourage, empower and equip women in IT by hosting events that can give female students the opportunity to network with those in the industry and showcase their skills.

Dogaru said she thinks her business technology management program is preparing her well for the industry.

“I love business, I also love tech and it’s a mixture together which is perfect for me because I also don’t want it to be a narrow path and I waste my time, my money and I could’ve been doing something else…so there’s a good chance that you’ll find something that you like.”

Cyber attacks are the other side of the coin in technological advancement. The gap in cyber talent offers a new industry for people with the opportunity to become experts in high demand.