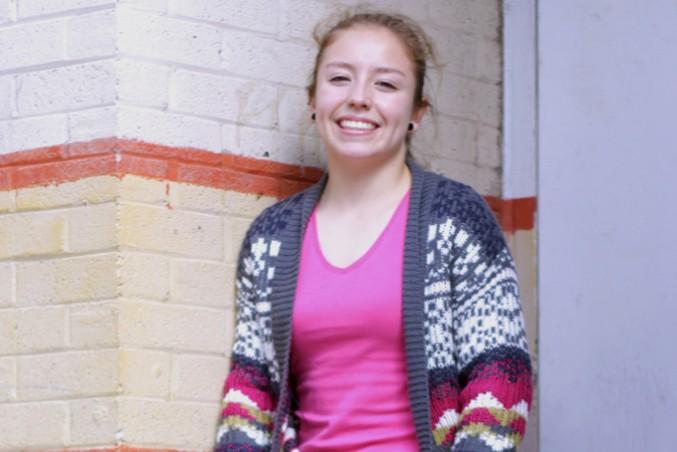 Maria Poveda has only spent one season with the Rams women’s soccer team, but she has made a huge impact in that short time

“Maria is always the first to step up,” says assistant coach Tina Cook. “If we need a volunteer, she’s the first one up. If we’re having a team conversation, she’s ready to listen and contribute. On the field, she contributed to many of the scoring chances she had this season.”

Poveda joined the team as a walk-on last August. Prior to university, Poveda was playing for Team Ontario’s U14-U16 teams that train out of Vaughan, as well as the varsity team at St. Francis Xavier Secondary School. While Ryerson’s coaches had seen her play before, she had not attended Ryerson’s specific recruiting weekends. When she showed up at the tryout in August, it was no surprise to anybody that she made the team.

While joining a team right before the season begins was daunting, Poveda gradually became comfortable, fully feeling a part of the team after the annual athlete retreat, “I was a little intimidated, because I didn’t know any of the girls, but slowly I became comfortable and I started to play the way I knew how to play.”

Poveda spent the first three years of her life in Colombia before she moved to Mississauga with her parents and her older sister. Her father, currently a software engineer, played on a semi-professional club team in Colombia, and instilled Poveda with the love of the game from a very early age.

“When I was young, he would take me out every Sunday and we’d work on technical drills. He gives me a lot of great advice and he tells me how I can work on my technique when he feels I need to improve,” she says.

Poveda started off playing house league at the age of seven, but it wasn’t until she was playing soccer with the boys at recess in Grade 4 that she realized the type of talent she had. “I was the only girl out there actually trying and attempting to get around them.”

Between working as a cashier at the Hershey Centre, and travelling to Vaughan five to six times a week for practice, Poveda’s time management skills grew and developed her into the disciplined and empathetic person she is today.

“Since I started at the age of 14, it really shaped me. I became more disciplined,” Poveda says. “If I do something wrong, it’s my fault, I have to fix it. I’m more cautious of what I do and how that affects people.”

While Poveda would like to go into either banking security or artificial intelligence (an aspect of technology she has not yet explored) after her degree, she hopes that there is also a chance she can make the Colombian National Women’s Soccer team. Not only because of her home connection, but she’s always dreamed about playing for such a talented group of players.

As a computer science student, what Poveda finds most interesting about the subject is studying what makes a computer fast, or efficient, a trait that she developed throughout high school. As a player for the provincial team, balancing that, school and a job made that absolutely necessary.

According to her teammates, this attitude gives Poveda a highly unique look at the game of soccer.

“Without having Maria on the field, it’s a different game,” says Carvalho. “She sees the game differently than everyone else does. If there’s a play and we’re attacking our opponents, there will be an opening for the ball two or three plays before it actually gets there.”

With Maria now fully emersed in the community of Ryerson soccer, she intends to take on more of a leadership role in the upcoming season that starts in late August. As her love of artifical technology mirrors her love of soccer, Maria Poveda has studied what makes the team great, and is actively contributing towards the goal of a championship season.