A student surveys his workload in the Cisco Systems-sponsored master's program.

Hasan Bilge, a 38-year-old electrical engineer for AT&T, is having the busiest year of his life.

Apart from working full-time, the father of three attends class four nights a week and spends Saturdays in Ryerson’s computer lab. Sunday is his time to relax: he studies at home.

“It’s fully booked,” he says of his life as a student. “[I got from] home to work, work to home, home to university, then university to home.”

Bilge is one of 27 students enrolled in Ryerson’s newest master’s program, a one-year course in computer networks sponsored by Cisco Systems, an American computer company that designs hardware for the Internet.

“I can do this because it’s only for a year,” Bilge says. “If it wasn’t [a yearlong course], I wouldn’t choose it.”

Unlike other graduate and undergraduate programs offered at Ryerson, the computer networks course is not funded by either the university or the provincial government. It is aimed at those already working in the industry who want to upgrade their skills. The program targets people like Bilge who must pay the entire cost of the course — $20,000.

In the corner of the classroom on the fourth floor of Eric Palin Hall is Cisco Systems’ donation to the program: a massive black box with cables and switches protruding from it. Inside the six doors of this storage cabinet is a highly sophisticated computer network, a machine which connects computers and allows them to communicate with each other. Students use it to design and test their own simulated networks.

The $700,000 piece of cutting-edge technology fuels the program. It’s also what’s fuelling the ire of university student associations across the country.

They say the exorbitant cost excludes students from taking the course and sets a dangerous precedent at a time of rising tuition fees and increasing corporate presence on campus.

Stalin Boctor, Ryerson’s associate dean of undergraduate studies in the faculty of engineering and applied science, says the inspiration for the new program came from a similar offering at Dalhousie University. Boctor helped design a program in Internetworking in 1997 for the Nova Scotia school.

“I thought it was a very interesting program that Ryerson could deliver,” Boctor says. “That’s when I started discussions with [Cisco] about starting a program at Ryerson.”

Boctor says the program provides a mix of theoretical knowledge and practical experience, turning graduates into experts in the field.

It’s an approach that appeals to students like Shahrzad Esmail, a recent engineering grad from the University of Toronto.

“It had hands-on experience with Cisco products I couldn’t get at other universities and it’s only a year long,” she says.

Last April, when Ryerson’s board of governors approved the $20,000 tuition fee for the program, RyeSAC and the Ontario Branch of the Canadian Federation of Students protested the decision.

“Education is supposed to be an equalizer for society, not to keep the poor poor, and the rich rich,” she says. “How do you access that right when it costs more than a yearly income.” 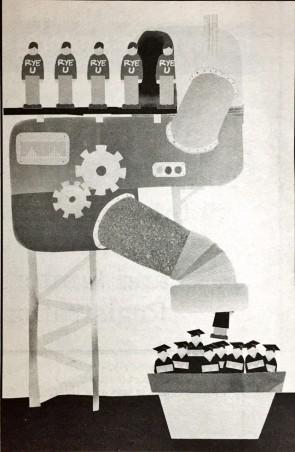 Carleton University in Ottawa will begin an information technology program in 2003 that will be funded in part by Cisco Systems.

Marco D’Angelo, director of educational affairs with the school’s student association, says the company donated $1.25 million worth of equipment and money and will also sit on the program’s curriculum committee.

“We think that’s basically selling our curriculum,” D’Angelo says. “If you have a Cisco degree, you have to ensure: number one, Cisco’s around; number two, they’ll hire you; and number three, what you’ve learned is still relevant.”

At Ryerson, however, Boctor says the university will maintain full control of the course content.

“The academic jurisdiction of the program is Ryerson’s and Ryerson’s alone,” he says. “We are totally in charge.”

The only reason for the high tuition fees is that Ryerson must plan for the network’s eventual replacement, which Boctor says will happen over the next five years.

“The equipment alone is worth over $700,000 — close to three quarters of a million dollars,” Boctor says. “If you divide that by five — assuming you have to replace it on a phased-in basis — you’re looking at $150,000 per year to replace it,” he says.

“The program is not-for-profit, it’s cost-recover to provide the funds to replace the equipment.”

Student Carson Ko says he couldn’t find any other program at par with Ryerson’s. “This is the only program I can find that’s only about computer networks,” he says.

For Ko, the degree has broad applications. He says friends have told him knowledge of networks is an asset in e-commerce.

“It’s better to know how the network works,” he says. “You’re not rewriting the program, but if you have the big picture about how it works, it’s easier to connect everything up.”