It's Just Like The Moves! Chris Mills shows off a Canada's #1 Air Guitarist shirt for Rye grad Kara Blake

They say this guy Chris Mills is crazy. He’s the man behind the one-man band Just Like the Movies, whose second independently-released album, Shake It, comes out on Nov. 30. The release party also features the music video for the song “Heavy Metal Rebel,” directed and edited by Ryerson film graduate Kara Blake, and a repeat showing of Mills’ short film Canada’s #1 Air Guitarist Saves the Day.

Just Like the Movies’ recordings feature keyboard pre-set rhythms blasting space-funk through blown out speakers, as well as a few guitar songs, rock and roll, metal and folk. All the songs are united by the yelping vocals of Chris Mills.

In performance, he seems as bonkers as fellow freestylers Wesley Willis and Biz Markie. His costume alternates between a superhero mask-and-cape combination, and a goat mask/ naked-chest ensemble. His instrument of choice is Radio Shack’s Rapmaster 2000 toy keyboard. All evidence points towards lunacy.

Despite all this, I wasn’t convinced of his madness and intended to discover the truth. I refused to accept at face value the screwball antics of Just Like the Movies. Is this artist truly mentally unhinged, or is it just really good P.R.?

“Lola, I’m doing an interview! This is very exciting!” Mills said to his cat as our interview began. He weathered the interview with a constant giggle and a relaxed interest, and I began to suspect this sweat-panted homebody was a faker.

We discussed his youth spent as a mohawked punk rocker, and the time his old “hardcore alternative” band opened for Fungazi at the Warehouse (now Kool Haus) in 1993. “I was definitely influenced and politicized by punk rock music, primarily in the 80s,” Mills said.

“Those political beliefs have stayed with me and influenced my ideas throughout my life.”

He told the story of how he found his instrument. “I was at a party and there was a Rapmaster 2000. I started playing around with it and was annoying everyone at the party. I thought ‘this is perfect, this great!’”

I asked Mills to demonstrate his talents on the spot, so he whipped on his #1 Air Guitarist t-shirt and pulled out Rapmaster 2000. He plugged in the mic and swung around a noisemaker.

With the hit of a button on his keyboard, a digital backing band jumped into formation on the soundstage. Unearthly drum sounds shook the keyboard as manufactured slap bass thwanked out the funk, and electric piano bleeps blooped a repetitive riff.

Mills belted into a staccato scream-rap about whatever sped to mind, and I was convinced: Just Like the Movies is for real. 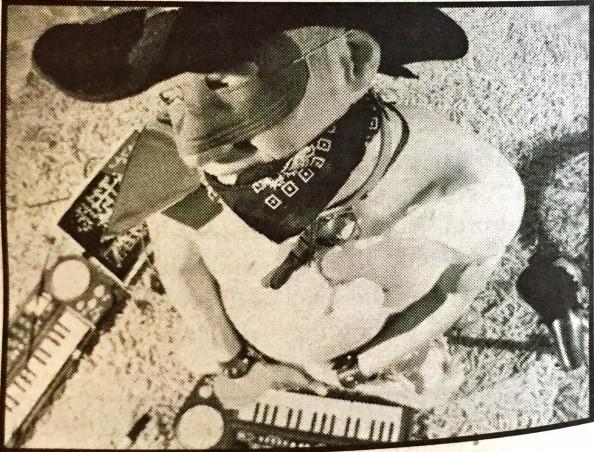 “I wouldn’t ever think about trying to change to fit into a radio format” Chris Mills, Just Like the Movies

He may be a completely usual human most of the time, but when Chris Mills becomes Just Like the Movies he goes absolutely mad. On the first track of his new album, singing in the voice of a dumb-ass metalhead he, growls, “My baby’s got a bad attitude and she’s rocking with the heavy metal!/ I know she’s trouble/ But that’s why I love her!” And though it’s funny as hell, he sings every word as if it were the truest thing in the world.

He gets pretty a few tracks later with the song “Incredible Sound,” when he sings “You’re like a merry-go-round/ Watching you fly is an incredible sound.”

All of a sudden he’s a cowboy in “The Wind,” soaking his sadness with booze in a dark saloon. Strumming an acoustic guitar half-heartedly, he slurs like Bob Dylan about to release a waterfall of tears. “I would kill a man just to kiss your pretty face,” he sings.

“I wouldn’t ever thing about trying to change any of the songs I write to fit into a radio format,” Mills said. “I write songs, and whatever’s there is there. I don’t feel obliged to do anything one way or another.”

I admit defeat and close the case: Chris Mills is no faker — he loves and is every character he creates, and he sings with a rare passion and honesty despite the overlaying silliness of the whole thing.

You can meet the cowboy, the biker and the soulman at the Just Like the Movies CD and video release party on Nov. 30 at Rancho Relaxo, 300 Collegy St. with the World Provider, Kandis and more.