They’re pant-dropping and breast-grabbing. They use jack-in-the-boxes in suggestive ways. And they certainly don’t do birthday parties — your parents would call the cops on some of these clowns.

Clown, From Nothing: A Cabaret of Clown Acts, Ryerson Theatre Company’s newest offering, is a hilarious collection of unconventional clown sketches.

“It’s not the clown that you might think: the Ronald McDonald or the ones that do birthday parties,” says director Leah Cherniak. “It’s a metaphor for life, and it’s very human. The clowns are cynical, smart, clever or intellectual.”

These clowns are on quests for seats at the movie theatre. They give the weather report. Some start water fights in public washrooms, and others are flamenco-dancing and maraca-shaking. These clowns even have lovers’ quarrels.

The routines were devised by a class of third-year acting students who were given red noses, but no scripts. They were then told to find their individual clowns.

Except for the noses, there is no standard clown attire in sight. Instead, British police helmets are paired with froufrou skirts, ratty calf-length wedding dresses and black army boots. One clown wears a floppy burgundy hat with a flower poking out the top. Her dress has a crinoline skirt, and plainly visible above her sequinned bodice is a lacy, dark-pink bra. 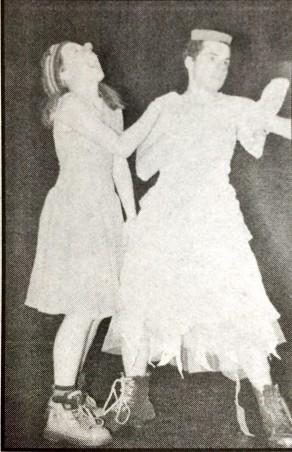 A clown stomps onto stage and plunks down on a chair. He’s wearing a birthday hat, titled to the side and clumsily placed atop a pancake-shaped cap. He stares at the audience.

“It’s my birthday,” he announces indifferently.

Aggressively, he blows into a birthday horn. It unfurls and produces a high-pitched toot. The corners of his mouth slightly curl up. He considers the horn for a moment and thoughtfully blows into it again. He smiles bashfully. After several quick, excited blows he’s in child-like paroxysms at the sheer amusement of it all.

Ultimately, says Cherniak, some routines made it into the show, and others didn’t. Opening night is the culmination of about four weeks of daily work, changes and fine-tuning.

In another routine, two clown lovers enter the stage and affectionately rub their red noses together, then turn around and playfully bump their butts together. The girl clown looks at the crowd with a goofy grin plastered on her face, as if to say “Isn’t he a dreamboat?”

There is little talking in Clown; gags are conveyed through miming and facial expressions. Throughout their routines, the clowns draw in audience members by making eye contact and giving them questioning, knowing or self-conscious looks.

“It’s a relationship with an audience that’s very different,” says Cherniak. “They actually acknowledge the audience.” Performed in the Abrams Studio — a small black box of a theatre with a seating capacity of 65 — the crowd is sure to be drawn in.

Later on in his act, the birthday clown plays with a jack-in-the-box he received as a gift. He begins by playing innocently at first, but then aligns the box with his crotch, turns the crank, and, well, pop goes the weasel. He smiles gleefully at the audience, sharing the joke.

Your birthday party clown was never so audacious. Then again, you probably never laughed so hard. 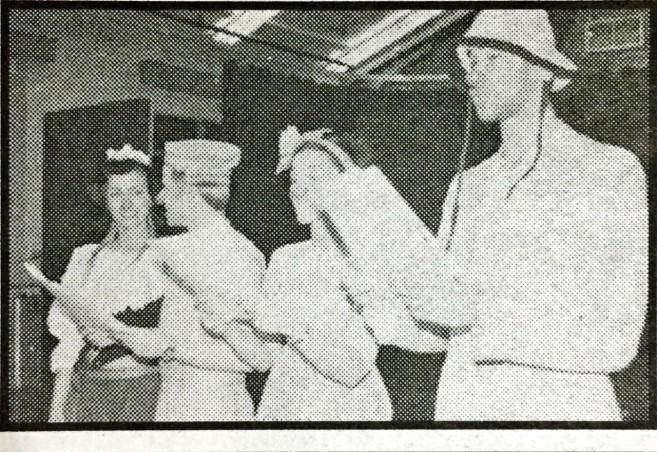