The women’s volleyball team had a rough ride in the first ten games of the season, but they got it together in the nick of time.

Imagine Cinderella divorced Prince Charming, lost all her respectability, then worked tirelessly to get it back.

That’s roughly the story of the women’s volleyball team. Ranked as early favourites in the OUA east division, the team slumped through the first half. At 4-6, an unlucky string of injuries turned the season that should have been into the season that also ran.

Then the clock struck tweleve. They realized how good they were, and turned it all around. Jacquie Fler and Elizabeth Reid rounded into all-star form and the team reeled off six wins in a row. Fler and Reid sit fourth and fifth, respectively, in kills-per-game.

Reid, was second in team offence, despite playing with a pulled stomach muscle.

“Physically, I’m broken,” Reid said after her final home game. “When I was hitting and serving there was constant ache. I rested it for the whole week and I thought it would be fine. As soon as I was on the court it came right back.”

The marathon match lasted two hours. Down two sets, the Rams turned the heat on the Gee Gees. They dominated the fourth set and won it by six points. In the deciding set, Ryerson played as though they already had the match in hand.

Reid, Fler, Mirijana Curic, and Serap Hossein-Naderi, the four graduates were given plaques before the game in honour of their contributions to the team.

Fler, Reid and Curic, who led the team after all-stars Carly Price and Katie Streib graduated last year, were the top three in team offense in the match and will be missed next season. 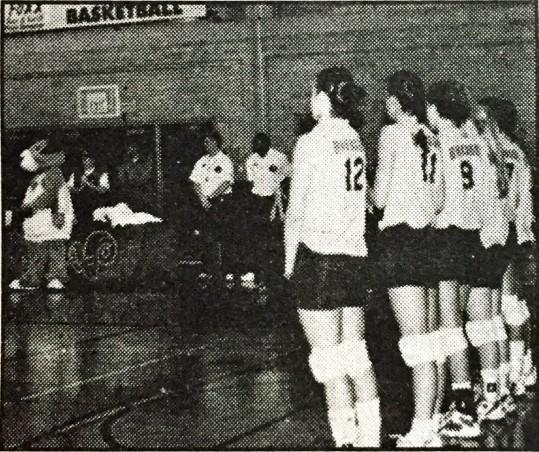 Reid, Fler, Curic, and Hossein-Naderi are honoured before the match . Photo: Sherryll Sobie

“You’re proud of what they achieved, but sad too,” head coach Arif Nathoo said after shaking hands with almost everyone in the gym. “For the young players, they gave them a real learning experience. They showed them what it takes to win.”

On their way back to respectability, the Rams beat almost every team who beat them on their way down. Toronto and Ottawa beat Ryerson early in the season and found out what goes around, comes around.

“We talked a lot about rising to the occasion. This is the big show and they needed a big performance,” Nathoo said.

The only team in the OUA east Ryerson has yet to beat is Queen’s, their final opponent of the season. A win against Queen’s would mean at least third place in the division, and a chance to play Toronto, who they destroyed in three sets in early January.

“Queen’s beat us because of our defence last time,” Nathoo said. “Our hitters and blockers are better now, and they haven’t seen our defence lately, so everything is completely different.”

Ottawa, led by Canadian national team player Kara Zakrzewska, were definitely caught off guard by the Rams now-consistent offence and defence. The Rams pre-game warm-up was light and muddled, while Ottawa hit the ball hard and often. When the first set began, Ryerson turned into a completely different team.

If the Rams have to play first place York University (15-2), they can stand confidently on their November victory over the Yeowomen. York looked lost in the loss, and Ryerson players and coaches admitted they beat themselves. York regrouped to beat Ryerson in January. The Rams have not lost since that game.

On Saturday, Ryerson plays its final regular season game at Queen’s. After that, they’ll play in the OUA quarter finals and see if the fairy tale continues.