Skate to Great hosted their first event to collect skates for children who are blind and visually impaired. It was held at Nathan Philips Square by the co-founders, world class figure skater Kaitlyn Weaver and Evan Kisoner, a fourth-year Radio and Television student.

“There are so many children whose families cannot afford skates, lessons or necessary ice time to learn how to skate,” said Kosiner. “This is where Skate to Great comes in.”

They collected 288 yesterday, however they’re expecting many more skates to be donated from the drop boxes they’ve placed across the Greater Toronto Area (GTA). FedEx Canada is also donating $5,000 towards the purchase of new skates in support of this initiative.

Kaitlyn Weaver, a six-time Canadian medalist in figure skating, had always wanted to pass on her passion for skating to underprivileged youth but she didn’t have a plan in place to carry out her goal.

With the help of Kosiner, Weaver was able to get her vision off the ground. Weaver and Kosiner first came up with the idea last summer after meeting at the Vancouver Olympics in 2010.

“Pretty much this started what if there could be an opportunity for kids around the country to be able to skate?” said Weaver.  “I didn’t know how’d it be possible, but if there’s something I want to give back, it’s the ability to skate.”

“Evan came to me and said ‘hey let’s make this happen’ and he knew the people and had the vision to put it all together.”

Out of the twelve people on the organizing committee, four of them are either current Ryerson students or alumni.

Weaver hopes the organization will continue to grow in the future, and events like this one will happen more frequently and on a larger scale throughout North America.

“The sky’s the limit really. As far as dreaming big I’m hoping it can branch out to the United States,” said Weaver. “Skating in general is kind of suffering in these two countries and anything to revive it and get people back on the ice is a success.”

Tyler Armes from the band Down with Webster and figure skaters Piper Gilles and Paul Poirer were on hand yesterday to help receive used skates. 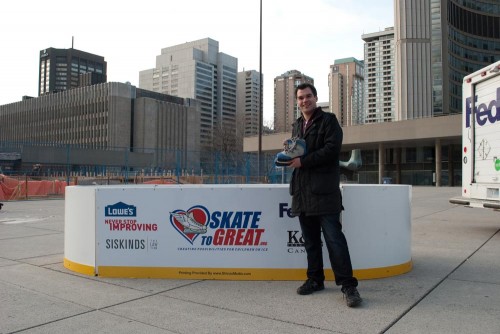 Evan Kisoner holding up a pair of donated skates