Tucked in a remote corner of Kerr Hall West, in the dead of night, the squeak of shoes and the jumpy beat of old school hip-hop echoes through the building. It’s certainly not your typical dance.

For the past four years, young hip-hop and street dancers from all over Toronto have been meeting at Ryerson every weekend to bust a move and thrown down new routines in the dead of night.

Composed of a handful of regulars and an ever-circulating pool of nomads, the group made Kerr Hall West their meeting ground in 2010 after they were kicked off University of Toronto’s campus for unknown reasons.

Although the group chose Ryerson as their new location, very few of its members actually go to school at the university, with one of the former regulars having graduated and moved on just last year.

Speaking as a senior of the group, Daniel Keith Morrison said that while the group does meet up regularly, they are not to be confused with an actual dance crew, but are rather a community of sorts.

“We’re all from different crews,” he said. “Some guys show up more often, others just come to practice or hang out.”

Morrison, 27, has been dancing competitively since he was 21 and is currently part of the Toronto-based dance crew called The Moon Runners.

In terms of accommodation, Morrison said that Ryerson has been fairly accepting of them, with only a few complaints from neighbouring staff.

“There was a person who works in one of the offices down the hall that gets mad sometimes,” he said. “I just think some people don’t like the music we play. I get that, there’s a lot of music I don’t like too. They’ve been pretty good about it, though.”

Sitting crossed-legged just a few feet from where the action happens, Dwayne Kim works from his laptop with a set of mini turntables in front of him as he controls the playlist for the night. 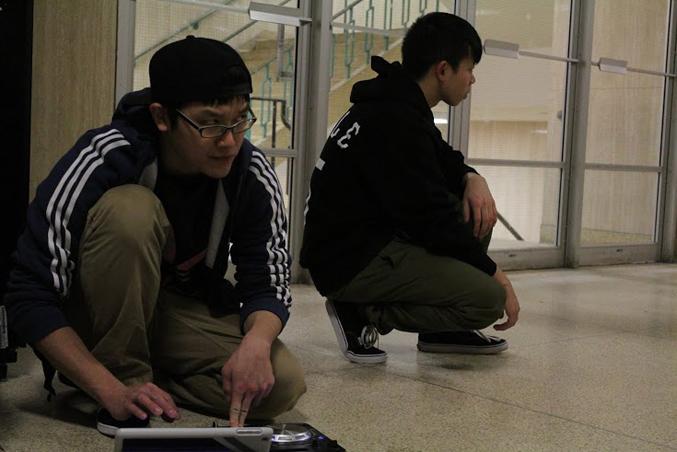 Commuting to the downtown core from Mississauga, Kim has been DJing with the group for the past three years as well doing dancing on the side.

Kim described the group as one that’s “very open” with a tight-knit core.

“We’ve all been together for awhile,” he said. “Sometimes people just come through and dance with us for a bit, sometimes they stay. It’s cool.”

While a number of those that attend the meetups make a living from dancing professionally, a lot are only part-time: Mile Au, 20, is a Laurier business student who’s visiting on break; Jinoo Muther works in retail as well as being a part of the crew “Tense Image”.

27-year-old Johnny Loh, who hasn’t attended a Ryerson meetup for a few months, runs his own video production company as well as a dance startup called Five Eight, something Loh describes as a “platform to shine light” on local dance crews.

Loh has been dancing since his teenage years but only started to take it seriously in his third year of university when he was exposed to the street community.

As someone who transitioned from studio choreography to freestyle street dance, Loh said that the move was “liberating”.

“In it’s purest form, street dance is self-expression,” he said. “Choreography is all about matching somebody else, but that’s not you. Street dance is your own personality. None of these guys are exactly the same, they’re all unique and constantly evolving.”