When an anonymous online lurker launched threats against University of Toronto feminists, it kicked off a collected response which marched through St. George campus.

Amid the Sept. 14 rally were fourth-year Ryerson social work students Jackie Mlotek and Alyson Rogers, who had traveled across the downtown core to express solidarity with the Toronto feminist community.

While the rally was well represented by local politicians and other universities, including York, Mlotek and Rogers were both taken back by the lack of a formal Ryerson presence.

“So we were thinking we need to do something, it was women that were affected,” Rogers said. “We don’t have gender studies [at Ryerson] but if we did it could have been our school.”

That night the two vowed to host an event at Ryerson to demonstrate solidarity. Through word of mouth and an event posting Mlotek published on Shameless, a digital and print magazine for young women and trans youth where she contributes, the duo helped to organize a gathering in Lake Devo the next day.

Roughly 25 members of the Ryerson community attended, creating banners, signs and posting to social media in order to reach out to fellow feminists at U of T.

“Because it happened online, all those threats, people kind of looked at it like, ‘It’s no big deal,’ and it is. It is important for us to say, ‘Yeah we stand with you this isn’t okay,’” Rogers said. “When you threaten one of us you threaten all of us.” 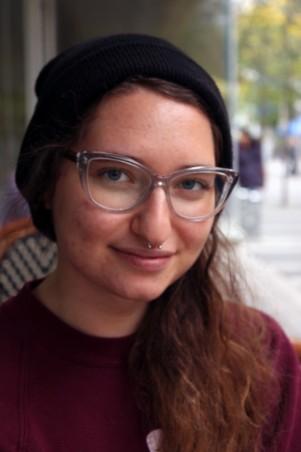 The success of the event prompted attendees to question which group had organized it. With both Rogers and Mlotek being asked for more information, they, along with other attendees decided to formalize the work they felt was necessary on campus. It was then that the Ryerson Feminist Collective was born. The immediate goal between the group is to push for official student-group status as quickly as possible.

“I feel like we have really strong groups in other places in Ryerson but in terms of a grassroots activist approach … advocating and working with folks with marginalized gender identities, that’s been missing,” Mlotek said.

The event in Lake Devo, and birth of the collective, was attended by members of Ryerson’s sociology department, who had also collectively taken action in response to the U of T threats.

Together they had penned a letter released to the entire Ryerson community criticizing a lack-of-immediate response from the school to protect students and faculty who felt threatened after the anti-feminist threats were made public.

Provost Mohamed Lachemi and security responded and now every office in the third-floor Jorgenson hall Sociology department is equipped with emergency buzzers and watched over by full-time security. Signs reading “A Feminist Professor Works Here” don each door.

“Feminism is absolutely critical and foundational to the ways in which the university is corporatized, it’s colonized, it’s white, it’s straight, it’s male-centred so on and so forth,” sociology professor Doreen Fumia said. “Women on campus continue to be threatened and not safe and we need practices in place to ensure that this is addressed.”

Responding promptly to issues faced by women and other marginalized gender identities on campus is one of the core gaps Rogers and Mlotek hope the collective will fill.

“We don’t have a central place. We have the Centre for Women and Trans People, which I think does amazing work, but they do a lot around support which is absolutely needed but I think we need something more around advocacy and change and quick response,” Rogers said.

Social Justice Week kicked off Oct. 5 with a solidarity rally co-organized by Fumia and fellow faculty-member Winnie Ng. The event, inspired by the original rally at U of T, saw a large gathering of community members marching through campus. Several members of the rally carried one of the original signs created by the fledgling Feminist Collective in early September.

The group, currently in talks with the RSU, will spend reading week formalizing their constitution. They will then begin collecting signatures to petition for official group status on campus –– something that is necessary in order to access funding and more resources for expansion and growth.

“I want this to be a group that lasts a long time at Ryerson,” Mlotek said. “I want to make it intersectional, so work really closely with racialized groups and queer groups and come together in a more unified way than what’s been seen before.”