The Ryerson School of Fashion held it’s 28th annual Mass Exodus showcase on April 9 and 10 in the SLC. Take a look at our coverage of the runway which presented the original collection made by fashion design students and the exhibit put together by fashion communication students. 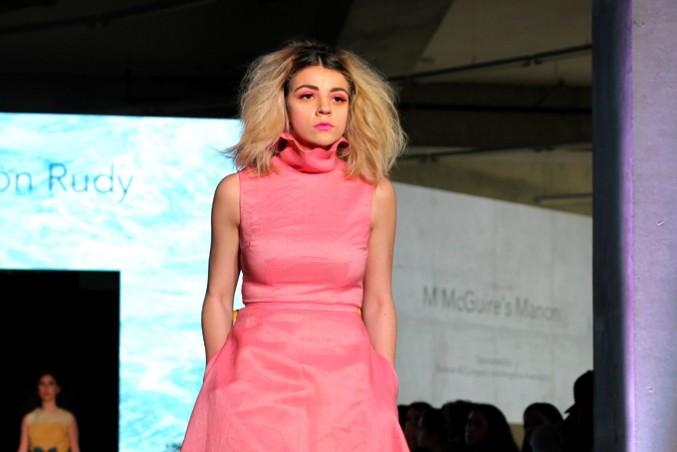 On April 10, the Ryerson School of Fashion hosted its 28th annual Mass Exodus showcase in its brand new home, the Student Learning Centre (SLC). Known as one of the biggest, largest student-run fashion shows in the world, it comprised of two parts: the exhibit and the runway.

The SLC’s sixth floor, also known as “the beach”, was transformed into a full-out runway.

“We have approximately 60 fashion design students and this year we have almost 45 fashion communication students who are participating in the exhibit,” said Robert Ott, the chair of the school of fashion. “Every year is different and it’s different this year because we’re moving to the Student Learning Centre.”

Van Yanez, a fourth-year fashion design student, said that at first, he was concerned, yet intrigued to see how the team would manage transforming the beach into a runway.

“When I saw it, I thought, ‘This looks like a fashion show in New York Fashion Week,’” said Yanez. “The audience was able to experience the show at a close proximity, if you extend your arm, you can touch the garments, feel the fabric, the texture and the construction.”

Ott said that choosing the SLC as a venue is a reflection of fashion promotion, along with modernizing and looking at what’s happening in the fashion industry.

“We really wanted to try something new. After all, is there a better place than the beach?” he said. “This location is a privilege and we hope it’s a positive experience for everybody.”

During the day, three shows took place, while a fourth curated show wrapped up the event. Todd Lynn, Ryerson School of Fashion alumnus and critically acclaimed fashion designer based in London, chose 15 collections to be featured at this show.

Lynn looked for specific aspects in the collections that he chose for the curated show.

“I think the most important thing about fashion is that, as a fashion designer, you really have to be proposing new ideas,” he said in a previous interview with The Eyeopener. “So I’m looking for something that has a unique statement, is personal and something that only the designer can do.”

The show featured collections with powerful messages such as Justine Latour’s collection: Au Natural. Her models wore pieces that were aimed to show the female body, without sexualizing it.

“My collection was inspired by female nude and how it’s began to be censored differently than males, especially in social media, everyday life and public, ” said Latour. “I wanted to rather show them in a way that’s more beautiful and natural.”

Wanze Song also had a unique collection where her goal was to challenge typical contemporary women’s wear.

“It’s contemporary women’s wear, however about 40 per cent of it is unisex,” said Song. “ I used masculine feminine elements, loose silhouettes and focused on the colour, shape and form of the silhouettes.”

Song explained that it finally felt like all the hard work and staying in the lab until 4 a.m. was worth it after the show.

Creativity is definitely a common trait when looking into the inspiration behind each collection. Clement Chan’s collection, for instance, is called Petrichor, which is the smell that occurs after rain.

“I was really inspired by taking that moment and translating it through fabric manipulation, pleating and surface design into my collection,” he said. “It’s really about taking what we experience through the senses and making it into something visual and tangible.”

Chan said he was happy with how his collection came together and was a good note to end his Ryerson career on.

“At the end of the day, four years for this one day, it was definitely a good ending before graduation,” said Chan. “It was better than I could have ever expected. All my models were really good and I had a great team behind me as well.”

Dylan Kwacz, the show producer, said he was proud of how far his team has came and was impressed with the outcome of the event.

“Everything went so smoothly, freakishly smoothly, but I’m so happy, honestly,” said Kwacz. “It’s been an amazing experience, I think my team has worked so hard and lived and breathed Mass Exodus.” 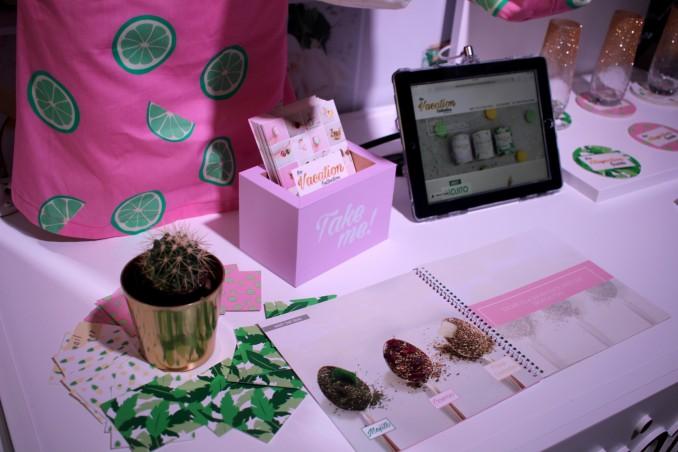 This year, the exhibit was open to the public in SLC’s Launch Zone on April 9 and 10. In total, 42 capstone projects from fourth-year fashion communication students were displayed.

Dylan Kwacz, producer of Mass Exodus, describes the exhibit as a way to showcase and promote their project.

“The capstone is a really broad project for the fashion communication students so they can really cover any topic they want related to fashion and it’s an accumulation of what they’ve done at Ryerson,” said Kwacz.

“I think it’s important to mention how much work we’ve put into it to have an end result and feel proud of it,” said Tessa Hall, a fourth-year fashion communication student. “Obviously also to have somebody important look at it, potential job opportunities coming through and on Ryerson’s behalf showing what the students complete in four years time.”

Hall’s project is called Contemporary Pasts. She said the goal was to look at the correlation between historical accuracy and costume design for film and television versus creative liberations speaking strictly about period dramas.

Bellamy also said she saw the different choice in venue for this year’s show and exhibit showcase as a positive change.

“I like how they utilized a new building on campus that’s very innovative and they combined the exhibit and the fashion show in a different way than previous years,” said Bellamy.
Vice provost, students, Heather Lane Vetere also said that in previous years, it was more difficult to see the precision in the projects, but this way, it’s more intimate and gives more of an opportunity to see more detail.”

So far, Kwacz said he received a lot of positive feedback from faculty.

“I think it’s the location that really sells it, being in the launch zone, it’s such a unique space,” said Kwacz. “Our location is complimenting the students’ work which is so beneficial.”