The United States federal election is over and two Ryerson students can say they played an important role in Hillary Clinton’s Democratic Party’s campaign almost every step of the way.

Jagmeet Sra, a 20-year-old political science student and Linh Nguyen, a 28-year-old economics student, both took breaks from their studies to join Clinton’s campaign. Both Sra and Nguyen said a Clinton presidency could have been a major step forward for women in politics.

They both agree that president-elect Donald Trump is bad, even for Canada.

“It’s heartbreaking, terrifying and all I can think about is every single person of colour I had the privilege of working with,” Linh said.

“You’ll sure as hell see me working the 2018 midterms to take back the house. And working the 2020 cycle to make space for the unified communities of colour to reclaim their country. It’s time to push for real disruption.”

Sra interned with the Democratic National Committee field department, organizing and mobilizing supporters, as well as volunteers, in all states for Clinton. Nguyen joined as a campaigner for a Democratic Super Political Action Committee.

Nguyen said that what concerns her most about Trump and his supporters is “their warped sense of security, safety and what makes for a prosperous economy.”

“I’ve had to only engage with Republicans in the last three months. Conversations have either been incredibly polarizing and short, or we dig deeper into our differences and why they exist,” Nguyen said.

Sra first got involved during the primaries when she was in Washington, D.C. for a previous internship.

She said her heavy involvement in the campaign showed her how critical the election was to American citizens.

“I’ve seen voters pray before making calls, which was chilling. You realize how important this is for people.” 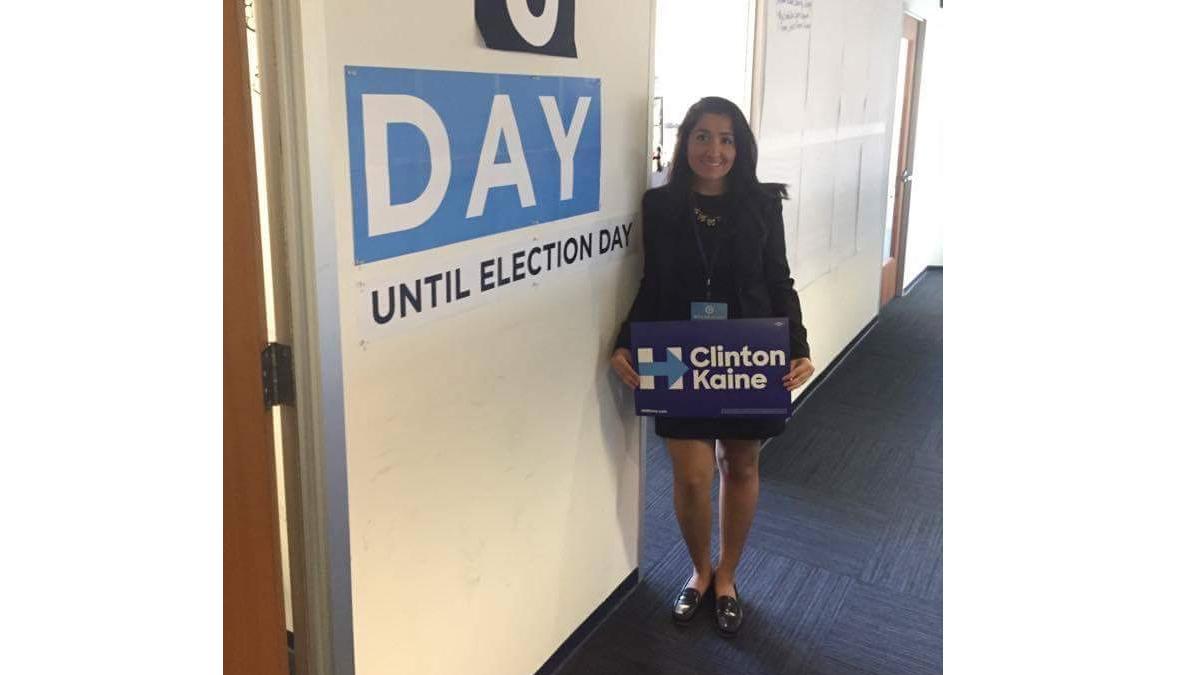 As a political science student, she said that her experiences at Ryerson did not prepare her for an election like this. Sra explained that the program is more theoretical.

She also said how vital it is for young people, like herself, to get involved in politics.

“We can be active in shaping the future … I also think the more we get involved, the more optimistic, productive and proactive we can become about things that matter to us.”

Sra said she doesn’t regret taking the opportunity to experience the campaign process. This is a sentiment Nguyen also shares.

The opportunity for Nguyen to get involved in American politics began in October 2015 when she received an offer to work for Sen. Bernie Sanders’ campaign team in Des Moine, Iowa. But when Sanders lost the nomination to Clinton, Nguyen started campaigning for her.

Nguyen said that the election was nothing like she has experienced before.

“The energy is real—aggressively in your face in some cities. You can feel it, see it, hear it everywhere you go. I’ve now been to over 30 states and … it’s hard to escape political commentary from everyday Americans.”

She also said that she would be coming back home with experiences that are not typically seen in Canadian politics.

“Building movements from the ground up is what I plan to bring back to Canada.”