In October 2016, Danica McPhee joined a roster of women representing Canada in the first-ever international sledge hockey tournament. As of two years earlier, McPhee had never even played hockey.

McPhee—a disabilities studies major at Ryerson—approached sports and sledge hockey as a form of exercise, not as a competitive endeavour. And the first time her coach, Ken Hall, saw her play, she wasn’t exactly national team material.

“It was awful, she had no concept of hockey or team play because she hadn’t participated in sports,” Hall said. “It took her a while to understand the nuance of the game, but once she started to get offsides and other things down, you could see she had a ton of natural talent at her disposal.”

McPhee met Hall in September 2013 and began playing for him shortly thereafter. The next summer, McPhee heard about the national team tryouts in August. The same weekend that she tried out for the national team in Brant County, Ont., McPhee learned she made the team.

After researching the Ontario Sledge Hockey Association (OSHA), McPhee joined the Mississauga Cruisers, a club founded in 1986 dedicated entirely to “sports for the physically disabled.” In a short period of time, McPhee became known for her speed and raw talent for finding the puck. 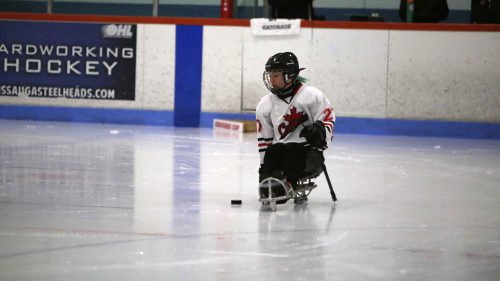 While Hall noted that McPhee hasn’t fully mastered stick-handling with both hands, her desire to constantly improve is evident every time she hits the ice. Sledge hockey also aided her in learning how to rely on other people, something McPhee’s father Cory says she has always struggled with, wanting to do absolutely everything herself.

In spite of her inexperience, McPhee— with only a year of house league ringette to rely on—wound up playing on the Canadian women’s sledge hockey team, scoring her first international goal in a 6-1 rout with Team Europe in the Ice Sledge Hockey World Championships this past October.

“[Team Canada] came about really quickly and I had only been playing for a short time. My coach was really supportive and saw a lot of potential even though I wasn’t that good,” McPhee said. “I didn’t even know we had a national team and so when I tried out I had no thought of making the team, but I guess they saw potential in me as well.”

In February 2013, when she was 23, McPhee took a trip to Mexico with her boyfriend to celebrate his mother’s 50th birthday. It was there, late one night, when she jumped from a ledge 10 feet off the ground onto what she thought was sand. Landing on hard concrete, McPhee damaged her L1 vertebra, located in the lower spine, and had to be airlifted back to Canada after an initial surgery in Mexico.

At first, McPhee couldn’t move her feet, and through the haze of morphine and initial surgery, she had no idea that she had broken her back.

McPhee’s parents learned of the accident when she called them from the beach while being tended to by paramedics. Thinking she had broken multiple bones in her legs, they were unaware of the severity of their daughter’s injuries. 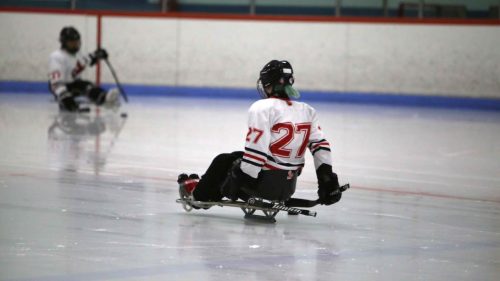 It was only after McPhee was airlifted back home, that her father suspected something was seriously wrong. Eventually doctors told him his daughter would never walk again.

“It was devastating. It’s like your whole world is crumbling in front of you,” he said. “It seems as if all of your hopes and dreams for your child go out the window.”

McPhee, to her credit, went through tough times, but adapted really well, Cory said. “She didn’t spend a lot of time wallowing in self- pity.”

Never a competitive child, McPhee wasn’t interested in sports growing up. Her hobbies extended more to music and the creative arts. Her father described her as a free spirit, always looking for the next big adventure.

In the first year of rehab, McPhee was set on walking again, eventually being able to stand up out of her wheelchair. But after realizing she couldn’t accept and love herself if she kept trying to change her situation, McPhee gave up the idea of walking again and decided to fully embrace her new life in a wheelchair.

Her introduction to sledge hockey came from evaluating that change and wanting to maintain her level of fitness. Looking first to wheelchair basketball to improve her cardio, McPhee never felt attached to the sport. But the sledge hockey community, full of kind and accepting people in similar circumstances, according to McPhee, pulled her in and was one of the primary reasons she began playing.

To McPhee, it’s easy—but completely wrong—to label sledge hockey as a simpler version of the more widely-known sport. At first, she underestimated just how technical and hard-hitting the sit-down version of the game could be. Being able to shoot and pass with either hand (players use two sticks to maneuver around the ice) is just one example of the variables not found in traditional hockey.

Also underappreciated, according to McPhee, is just how visceral playing sledge hockey can be. Skating full speed while strapped to a sled weighing 25 pounds can evoke physicality just as intense as mainstream hockey.

“We have to be pretty ambidextrous and a lot of people are really surprised by how physical the game is,” McPhee said. “Besides that, the rules are the exact same, except when you run into somebody with your feet and you get a T-boning penalty.”

Enrolling in the disabilities studies program was a decision McPhee made after the accident. Previously taking classes in hair-dressing school at George Brown College, she never thought she’d be interested in disability studies.

Both McPhee and her father note the lack of direction she had in her life before the accident, curious about too many subjects to settle on just one. To her, one of the most interesting aspects of the program is that it’s an arts degree, focusing on “the deconstruction of normalcy, instead of the pathology of disability often connected with a science degree.”

McPhee is currently involved with peer support in connection with the disabled community. She originally wanted to get involved with government policy surrounding her peer group, but her interests have gravitated towards grassroots activism in the last four years.

“You can build communities of disabled people who can create change through activism and audience interaction,” said McPhee. “Initially I wanted to get involved with policy, but I realize now it’s not really for me.”

In the beginning, it was a little thing— sledge hockey—that provided McPhee with an outlet for her unrealized talent. And it’s a little thing she doesn’t intend on giving up anytime soon.

“Danica made it known that she was going to be self-sufficient,” said Cory. “As a father, four years on, I’m very, very proud of her and her level of independence.”