Hillel Ryerson celebrated the reveal of their $10,000 loft renovation, with funding secured entirely by students.

Members of the Jewish student group gathered around fruit and cheese plates on Wednesday for the sneak peak of their revamped space at 21 Dundas Square. The renovations were funded by the On One Foot campaign which allows students to raise money to improve their campus community. 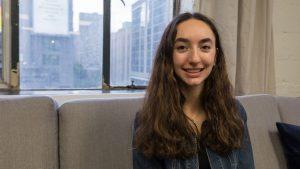 Jordyn Weinberg, communications chair of Hillel at Ryerson and second-year professional communications student, participated in the On One Foot fundraising initiative.

She said she’s happy with the renovated space because it was hard for students to fully enjoy the loft before.

“There were two tables and people wanted to hang out here but … you can’t really hang out in a space that’s just an empty room,” she said.

Weinberg said the goal of the renovation was “to make it a place where students can come and actually feel comfortable.”

Geoffrey Handelman, president of Hillel Ryerson, said the loft is an open cultural space for Jewish and non-Jewish students to spend time together and have a safe space on campus. He said after being at the loft for some time, the renovations were overdue.

“It started getting a little run down and old and it needed a rejuvenation,” Handelman said. 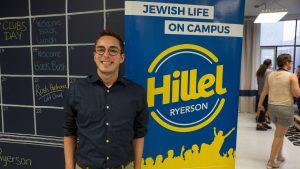 Alyssa Moses, associate director of Hillel Ryerson, said she was impressed with the student engagement throughout the fundraising campaign. She said they started off with about 15 members and ended with around 30.

“We were one of the few schools that had members join throughout and actually ended with more members on the team than we started with,” she said.

Maya Morrow, a first-year creative industries student, said the renovation reveal was her first introduction to Hillel, but she definitely sees herself frequently using the space and attending events.

“I’ve already made some connections,” she said. “When you meet someone who’s Jewish, it’s like an instant connection. It’s very comforting and I didn’t realize how badly I would need that.”