It was a hot, long, disappointing Sunday for Ryerson’s baseball team, who lost a double-header against the Wilfrid Laurier Golden Hawks.

The Rams threw away their first game of the day in the ninth inning, allowing Laurier to score three runs on their way to a 6-5 win. Ryerson couldn’t stop the bleeding in their second matchup at Stan Wadlow Park, as Laurier blew them out to end the Rams’ weekend with a decisive 12-0 loss.

It was a surprising result after the Rams had just come off back-to-back wins on Saturday against the University of Western Ontario, the OUA’s defending champions.

“We’ll just take it as a learning experience,” said head coach Ben Rich after the Rams’ two losses to Laurier. “That was the message to the guys at the end of the day—to remember how it feels to cough up a lead, not because they took it, but because we handed it to them.”

The Rams started off the first few innings of Game 1 with strong defence, holding off Laurier with aggressive pitching from Caleb King. The Rams’ offence would also come to life, with runs from Phil Seguin, Chris Aubin and Jesse Fishbaum leading them to a 5- 3 lead by the sixth inning.

Then, it all went downhill come the ninth.

Rams pitcher Jeremias Sucre struggled to strike out Laurier’s batters, and sloppy errors in both the infield and the outfield gave the Golden Hawks a chance to bring in three runs and ultimately pull away for a win. 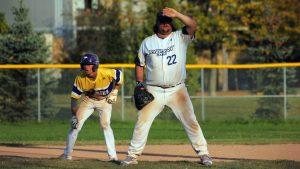 The Rams were eager to get their revenge, but had to wait for both an umpire and for a heat delay to clear—a time frame in which Sucre warmed up four separate times. After an hour delay, the Rams couldn’t turn momentum back on their side.

Ryerson’s defence was overwhelmed by Laurier’s batters. Quick reactionary moments from Sucre kept off a couple of runs, but it didn’t help much; the Rams still gave Laurier a 6-0 lead by the third inning, a run total which the Golden Hawks would double by the end of the day.

By the seventh inning, Rams coach Ben Rich called it in, using the game as an opportunity to give field time to players who usually serve as substitutes. The change in the lineup gave way for catcher Kenji Nakanishi to record his first OUA hit.

The two losses dropped the Rams to a 5-7 record, but Rich said the team isn’t going to dwell on the loss.

“We’re going to remember what this feels like, but understand what we need to do to make sure it never happens again.”