Have you ever wondered while walking on campus what the wooden structures lining Victoria and Gould streets are?

They were built by engineering and architect students for TimberFever, a design and construction competition held from Sept. 21 to 24. This is its third year at Ryerson. Groups of six students (three engineers and three architects) competed against each other for cash prizes. This year,  five other universities alongside Ryerson participated in the competition.

Each of the teams were given a random object that they had to incorporate into their design such as vinyl records, a television or an Easy-Bake oven. The objects were also used as inspiration for the design of the final product.

The designs revolved around issues of accessibility and education. Books and wheelchair ramps were essential staples to the design of the structures.  All structures had to be “weight tested” with iron weights.

Competitors also got help with their projects from local carpenters and mentors who are practicing architects and engineers.

Out of the sixteen projects, there were a variety of different designs including team Ginkgo’s “Woven Haven” and team Winterberry’s*  “Crescendo.” 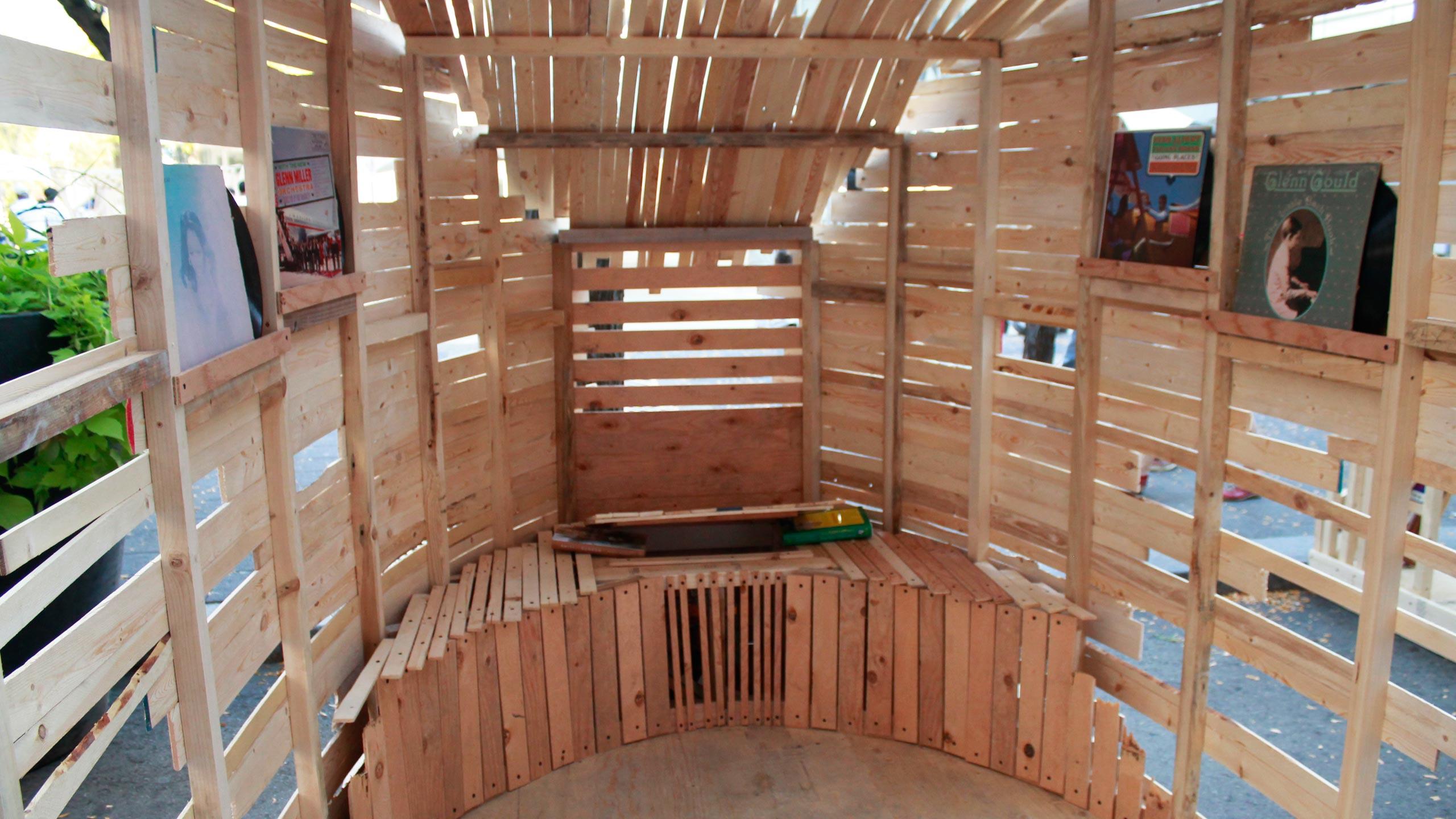 Made by team Winterberry, the “Crescendo” structure took 36 hours to make. The team was given a few vinyl records to incorporate into their structure.

“We were inspired musically as our found object was records. That’s why we shaped our structure into an arc, resembling a crescendo. The user gets to engage inside the space and with the community outside. The experience gets amplified.” said Tess Hoover, a fourth-year architecture student at Ryerson.

Crescendo is wide open on one end which makes the design accessibly friendly for wheelchair users. It was made from dense wood. The design also includes a closed compartment where the group envisioned a record player or books can be placed. The compartment is built into a sitting area.

Hoover said that the group had challenges with the wood medium as only one or two of them had previous experience working with wood. However, the interdisciplinary nature of the competition, engineering and architecture, was a very appealing aspect for the group.

“This is a cool competition, it is very art minded,” said Hoover.

“I am a fourth-year student, so this was my last year to get involved. I didn’t get to do something like this first year.” 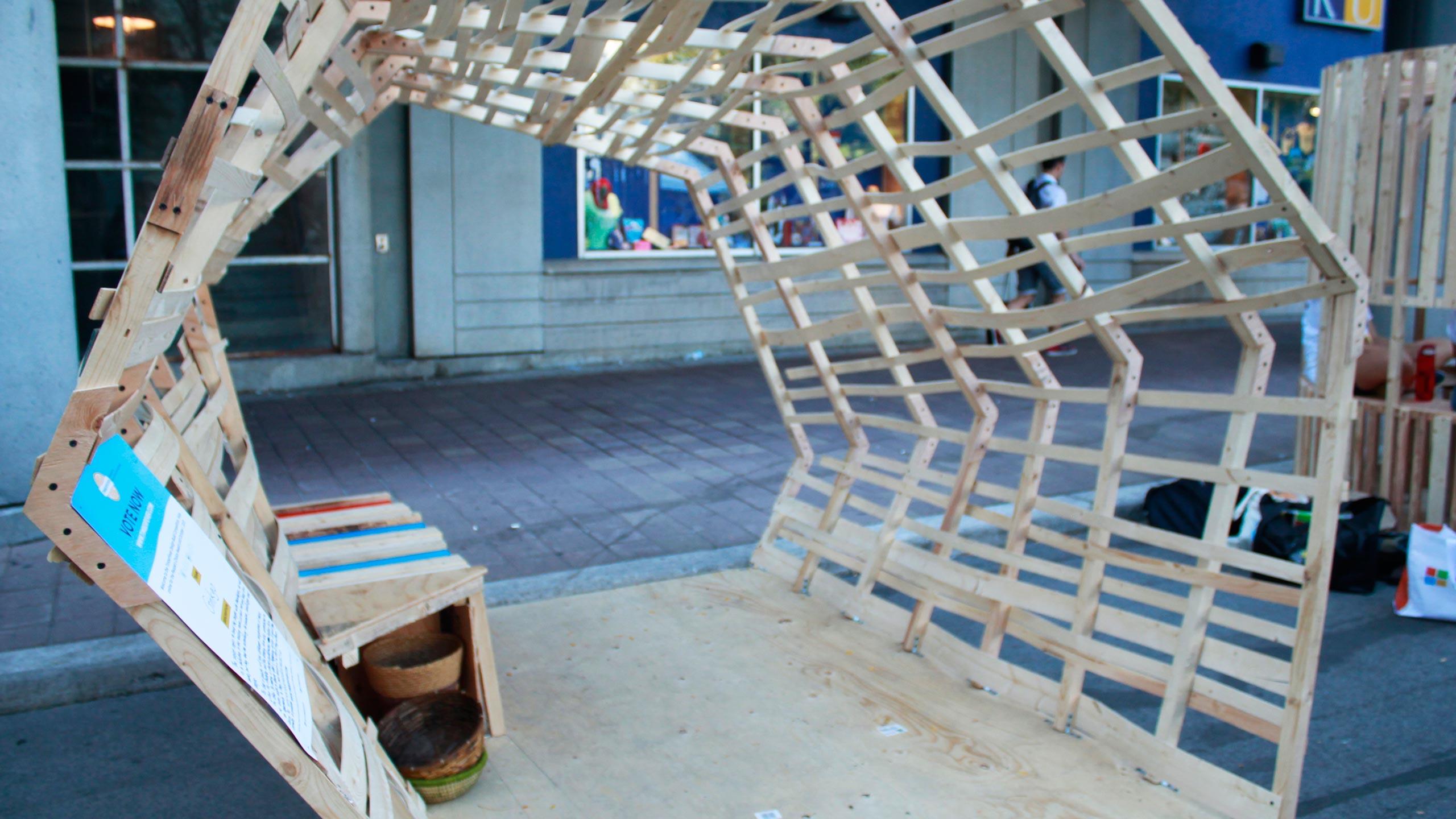 “Woven Haven”  made by team Ginkgo took 16 hours to make.  The team was given woven baskets as their object, which inspired their overall design.

“We wanted to incorporate a reading room space in our structure so we wanted to go with the idea that you’re reading not just the books but the surrounding,” said Tiana Lee, a third-year architectural science student at Ryerson.

The structure is durable yet looks very light as it has open space for lots of sunlight and air to get through. The weaved in wood design choice also helped solidify the structure.

“We took the load of the weight test. We also made gusset plates into the arches of the structure to make it stable. It took on a very organic shape, so it looks very clean,” said Mohammed Baig, a fourth-year civil engineering student at Ryerson.

Baig and Lee were both interested in competing for the hands-on nature of the competition.

“This year, there are other universities involved, so you get to work with more engineering and architectural students. You get that hands-on experience as well as working with others as these will be the people who you work with when you go into the field,” said Lee.

Baig also said he joined TimberFever to participate in a “real-life scenario” and to experience the interdisciplinary of both architects and engineers working together.

“This is where engineering meets art,” said Baig.

Baig and Lee’s team later placed second for their design of “Woven Haven” at the TimberFever awards ceremony held at the George Vari Engineering and Computing Centre on Sept. 24. Their cash prize was a $1,000.

Baig said he would invest his portion into bitcoins and Lee said that she would save her portion of the prize money or use it to help pay for her TTC metropasses.

Correction: a previous version of the article incorrectly named the team Winterberry as Winterburry. The Eyeopener regrets this error.