This weekend Ryerson’s fastpitch team (10-10) is headed to the playoffs, and a player with an unusual history is leading them there.

Rookie shortstop Emma Carr, the team’s leadoff hitter, had a monstrous season to carry the Rams to their first post-season appearance. She hit four of the team’s five home runs, recorded 17 RBIs and compiled a remarkable slash line of .509/.588/1.483.

“She’s the catalyst for our team as the lead off hitter, it all starts with her,” said Rams head coach Wayne Nishihama, who helped start the fastpitch program in the summer of 2016. “She leads by example, and her performance on the field has the girls look up to her.”

What makes Carr’s ride to Ryerson fastpitch so unique is that for the previous 14 years, she played traditional baseball—a very different ballgame—with eight of those seasons spent suiting up for a men’s team in the Wexford-Agincourt Baseball League.

Yet the underhanded pitching style of softball, along with its bigger ball and smaller diamond— a cumulative difference of 30 feet around the bases—doesn’t appear to bother the Scarborough, Ont. native; in week four of the 2017 season, Carr became the first Ram to be named Ontario Intercollegiate Women’s Fastpitch Association (OIWFA) Athlete of the Week.

“It’s been a lot better than I thought it would be. My main concern was the batting,” says Carr, a second-year photography student. “Just finding [the ball] and tracking it; it’s different, but it’s been easy to adjust to.”

The 19-year-old Carr, who’s played for the Canadian national women’s baseball team for three years, has never played an inning of competitive softball in her life.

“You have to get used to the angle of the ball coming up [from a softball pitcher], as opposed to down in hard ball,” says associate coach Mike Alexander. “After about our second practice, she started picking up the ball a lot better.” 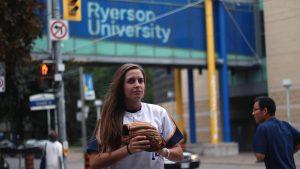 In the infield, Carr had to adjust to a significantly shorter defensive game, moving from centre field to the keystone at shortstop.

“Do the Jeter!” is frequently shouted by teammates during practice.

“It’s really cool playing with someone like Emma,” says third baseman Olivia Stelmachowicz. “It’s nice to know that when she plays shortstop, I have somebody to back me up.”

In the clubhouse, Alexander says Carr draws on her experience with Team Canada to help lead the team, even as a first-year player.

“She’s really fit in well as a team player, encouraging and mentoring the girls with anything from hitting to fielding,” he said. “She plays at a higher level on the hardball side, so for the other girls to see the potential that they could also reach and work towards, it’s been fabulous.”

Carr and the sixth-place Rams will begin their playoff run against the third-place University of Toronto Varsity Blues on Oct. 14 at 9 a.m. Ryerson went 1-2 against Toronto this season, and the teams last faced each other Sunday, when the Varsity Blues swept a two-game set to finish the season.