Rami Rao, a first-year media production student from China, says that through the challenges she faces as an international student, she has discovered herself and learned to appreciate her culture.

She arrived in Canada two years ago from the city of Shenzhen after a grueling 15 hour flight. 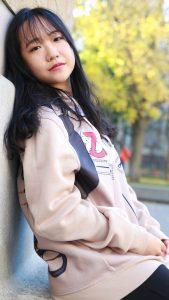 As a newcomer, she said she had other expectations of western society before migrating. “I watched a lot of reality shows and I thought that life would be easy and spectacular here, but really it isn’t,” said Rao. “It’s hard to make friends because you come from a completely different background.”

Rao said the most difficult part of leaving her country was having to say goodbye to her parents.

“The emotions started to kick in when I had one month left before leaving and when two weeks were left, I started thinking ‘oh my gosh, I’m going to leave home, my parents, the food,’” said Rao.

The hardest moment for her was at the airport before boarding the airplane that would take her across the world. Even though she has now been through this process several times, she said it doesn’t seem to get easier.

“When you’re at the gate and your parents are waving good-bye, you really want to cry,” said Rao. “For me this is the hardest part. The fact that you have to separate from your loved ones and things that you grew up with,” said Rao.

Rao struggled to find her place in Toronto society. She said growing up in another country made it tough to communicate with others and find commonalities.

Nonetheless, she said a positive aspect about her transition to Canada was becoming proud of her background, culture and her identity.

“I honestly could care less about thinking about things like, ‘do people like me or does my accent affect my relationships’ because I realized that I have to love myself, be comfortable with who I am and surround myself with people who believe this as well,” Rao said.

As a piece of advice from one international student to another, Rao said that stepping out of your comfort zone is the key to a better transition.

“International students, like me, are afraid to speak up. I really encourage them to try different things and talk to different people to eventually become comfortable with who you are and discover how you fit into this new place.”