Ryerson’s men’s hockey team returned to action on Sunday for their home opener, winning the second game of their season 4-3 against the Windsor Lancers at the Mattamy Athletic Centre.

On Sunday, the Rams held a commanding 3-0 lead midway through the third period, but the Lancers stormed back to force overtime. Their comeback fell short as the Rams earned their second straight victory thanks to an OT goal from Matt Mistele.

“Our team was complacent and took our foot off the gas and allowed them to climb back into the game,” said Rams head coach Johnny Duco. “For us it’s a learning lesson and we will make sure we stick to our game plan and play a full 60 minutes. We need to make sure that we play the same way from the first shift to the last shift and don’t deviate from our plan.”

In the opening minutes of the game, Ryerson went on the power play after a vicious hit from the Lancers’ Blake Blondeel, who received a five minute misconduct penalty for checking from behind. That said, the Rams squandered the early opportunity after being unable to establish any significant presence in the offensive zone.

Unlike in the Rams’ first game of the season on Thursday against the Guelph Gryphons, Ryerson got on the board first, as freshman Steven Harland put home a rebound midway through the first period. The goal, assisted by Devon Paliani and Vince Figliomeni, was Harland’s first of the season and first career OUA goal.

With 4:26 remaining in the first period, the Rams went back on the power play after another questionable hit, this time from Jack Van Boekel, who was assessed a minor penalty for cross checking. The Rams couldn’t capitalize, but by the end of the opening frame they were outshooting the Lancers and clinging to a one-goal lead.

Just like the first period, the Rams opened the second with an early power play opportunity. This time, Ryerson found the back of the net after a gorgeous passing play finished by Mistele, with assists from John Carpino and Alex Basso. The goal was Mistele’s first of the season and also marked the Rams’ first power play goal of the year.

Ryerson finished the game 1-5 with the man advantage. After the game, Duco addressed the power play struggles. “We will keep working on it. I like the guys on that unit, and I’m confident that they’ll be able to turn it around.” 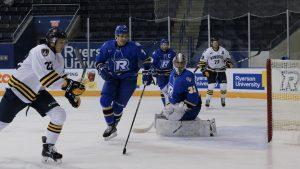 The Lancers got their first power play of the game midway through the second but were unable to put one past Rams freshman goaltender Mario Culina.

With just under five minutes remaining in the second, Windsor went on the power play again, and though the Lancers didn’t manage many chances, the shorthanded Rams definitely did. Ryerson’s penalty killers went to work, creating two short handed breakaways, but were unable to increase their lead. Heading into the third, Ryerson led by two.

When Lucas Froese roofed a goal with 12 minutes to go in the third, Ryerson’s lead increased to 3-0, but Windsor’s Brennan Feasey responded with a goal of his own less than a minute later.

From there, the Lancers started to press, leading to their second goal inside of a minute. The Rams lead was down to one.

All of a sudden, the game was up for grabs, with the Lancers taking over all sense of momentum.

With just under eight minutes remaining, the unthinkable occurred for the Rams, as the Lancers’ Kody Gagnon tied the game on a gorgeous shot. In about two minutes, Windsor had erased a 3-0 deficit and forced overtime.

In the three-on-three extra frame, Mistele came to the rescue for the Rams, scoring a highlight reel goal with 1:19 remaining. The goal was his second of the contest and fourth point on the season.

Up Next: The Rams will travel to Kingston to take on RMC and Queen’s next weekend. Earlier in the year, Ryerson faced off against RMC in exhibition play, winning in overtime. They have yet to play Queen’s this season.