The Ryerson Rams men’s basketball team got off to a great start in their third exhibition matchup of the 2017 season, taking down the Saskatchewan Huskies 116-43 in a dominant performance Saturday at the Coca-Cola Court.

Ryerson’s smothering defence was vital to their victory—limiting their opponents to shoot just 14-54 (26 per cent) from the field, while forcing a total of 23 turnovers throughout the 40-minute contest.

The Rams were paced offensively by the trio of Keevon Small, Roshane Roberts and Ammanuel Diressa, who outscored the Huskies with a combined 49 points between them on efficient 17-28 shooting from the field.

After winning back-to-back OUA titles, Rams head coach Roy Rana said he expects nothing but the best from his squad.

“I think our expectations are always the same when we head into the season,” he said. “We’ll find out how good we can be, but we know where we want to be and that’s the OUA championship.” 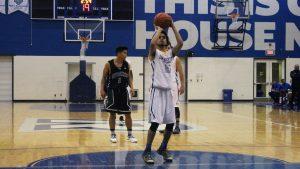 The Rams’ bench was dominant as well, outscoring the Huskies’ unit by a commanding 52-6 margin.

Two of the Rams’ biggest acquisitions this year in seven-foot-two centre Tanor Ngom and guard Zubair Seyed also made their mark in the game, finishing with eight and five points respectively in their home debuts.

UP NEXT: The Rams will look to build on their dominant win when they take on Marietta College (NCAA Division III) tomorrow at the Coca-Cola Arena.